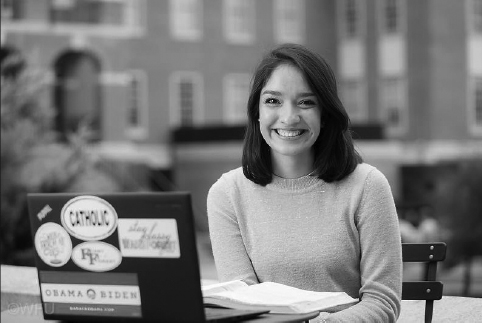 Senior Cazandra Rebollar, a Magnolia Scholar and first-generation college student, has made her mark on Wake Forest and the Winston-Salem community through her engagement with the Latino community.

She has served as a mentor for local schoolchildren, organized themed dorm housing for Latin American students, engaged with Latino alumni and coordinated Wake Alternative Break trips. She has been a major change agent during her four years on campus and will continue her advocacy next year as a University fellow in the Pro Humanitate Institute.

Eighteen years old and a senior in high school, Cazandra Rebollar already had ambition. Growing up one street away from her elementary school and Elon University, Rebollar could have stayed close to home. Instead, she received the Magnolia scholarship, a merit scholarship given to first generation students, and came to Wake Forest.

That was four years ago.

Now, Rebollar, a first-generation college student, has proven how truly expansive her thinking is. As an activist, she has worked to expand resources for Latino students on campus, including winning approval for the first Latino-themed housing.

Additionally, she has consistently contributed to the broader Winston-Salem community, including tutoring children at the El Buen Pastor community center since her first year.

As a result, she has won multiple awards for her volunteer work and engagement with immigrants in the community.

“Rebollar is a true inspiration for anyone who knows her on a personal level,” said Tania Montalvo, a friend of Rebollar.

By arriving early at Wake Forest for a Magnolia Scholar summer preparation program in 2013, Rebollar said she met a lot of her friends right away. Because of these connections, she decided not to join a sorority. That allowed her to focus her energies on joining other organizations directly engaged in creating change.

Rebollar gets her inspiration from a range of people who love to serve the community — her mentors in the Magnolia Scholars office and faculty she has met at Wake Forest. She has mirrored this passion through her involvement with El Buen Pastor where she has mentored the same cohort of students since they were in first grade.

Continuing her interest with the Latino communities, she joined the Organization for Latin American and Latino Students on campus (OLAS), later becoming president during her sophomore and junior years.

“Rebollar is always inventing ways to bring us together, involve the community, and share our cultures with one another,” said Natalia Mendoza, a current resident.

“It was hard because it had never been done before, so you just did not know where to look,” Rebollar said.

However, her efforts were successful after she consistently pressed the administration, because “somebody just had to know.”

“For as long as I have known Rebollar, she has been a stellar student leader on this campus,” said Celina Alexander, faculty advisor for OLAS.

Rebollar not only is inspired by the organizations she joins, but also inspires others to get out and help create change.

She influenced Alyvia Williams to get involved in the Wake Alternative trips and to volunteer at El Buen Pastor during her freshman year, which helped Williams find and develop her own interests, and define her involvement in the community.

“Cazandra has been a compassionate and dedicated advocate for underrepresented groups on and off Wake Forest’s campus,” Williams said.

Despite all the positive impact Rebollar has had in college, she regrets not serving as a freshman resident advisor because she “would have wanted to show her residents the different paths one could take at Wake Forest.”

Rebollar is eager to continue teaching and encouraging others once she leaves Wake Forest. Next year, she will serve as a university fellow in the Pro Humanitate Institute, before leaving to continue her studies at the University of Maryland.

“In the next few years, I hope I can continue to make an impact in my community through sustainable and meaningful personal interactions,” Rebollar said.