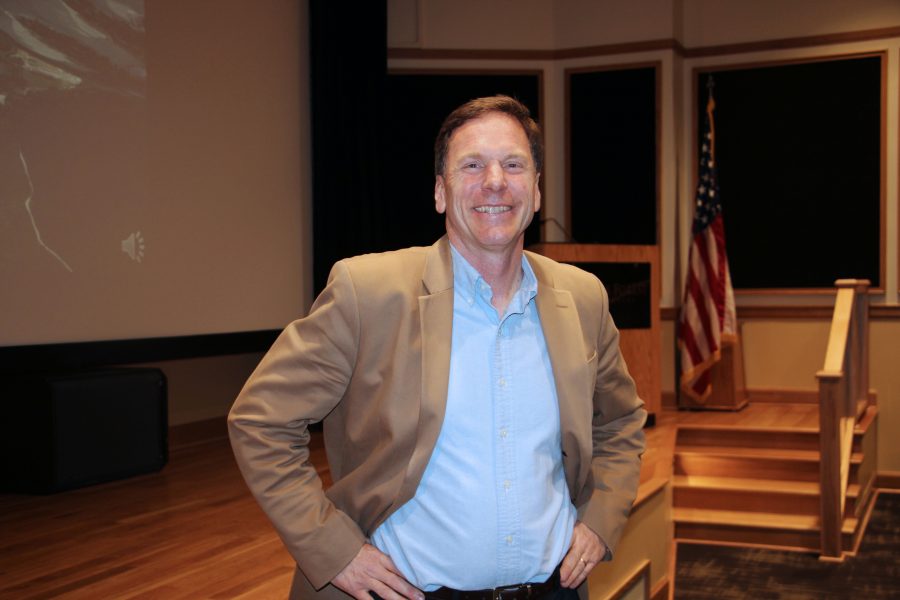 Over 20 years ago, Max Floyd issued students a challenge.

“The ball is in the students’ court,” Floyd wrote in an op-ed featured in the Old Gold & Black in the 90s. “If they take the challenge, this facility can be a wonderful legacy handed down for all future students to enjoy.”

He dreamt of a transformative space that would foster wellbeing between students, staff and faculty alike: a campus recreation facility.

“I think Max probably started talking about it the second day he started on the job,” said Ron Wellman, director of athletics, who hired Floyd as the director of intramural and club sports in 1994.

In the coming 2017-2018 school year, this hope for a legacy will become a reality for the Wake Forest community. The final phases of the campus recreation renovation and transformation project are set to be complete.

Since January of 2016, with the grand opening of the Sutton Center, renovations and improvements to campus recreation facilities have become tangible exemplars of the university’s investment in well-being. Phase two of the renovation and transformation project is projected to be completed in August of 2017, followed by phase three in March of 2018.

The project is arguably the most complicated of its kind since Wake Forest’s move to Winston-Salem in 1956, according to the spring 2016 annual financial update on behalf of executive vice president Hof Milam.

But the impact of these improvements, Floyd believes, goes beyond state-of-the-art facilities.

“Facilities can only take you so far,” Floyd said. “It is the people I’ve worked shoulder to shoulder with that have made all the difference. It is the people who greet you at the door, send you to your court for your game, instructors who welcome you to the fitness class or trip leader showing you how to set up the tent which makes the difference.”

This difference, many believe, is equally as influenced by Floyd’s tireless passion for his job and authentic drive to be an outstanding supervisor to all those put under his care as director of campus recreation.

“He’s infectious in his desire to make something better all the time,” said senior Matt Avara, a student who has worked with campus recreation and Floyd since his freshman year.

Students aren’t the only ones who see this characteristic shine through Floyd’s persona. Fellow staff members echo this sentiment as well.

“The great thing about working with Max is that he’s a ‘yes’ guy,” said T.J. Peele, who worked alongside Floyd for nearly 10 years, first as the coordinator of intramural and club sports and then as the assistant director of campus recreation. “If you propose a reasonable request, he won’t turn you away. He will not bridle you. He will start working to find a way to help you. He instilled that in me — the idea that we needed to be ‘yes’ people.”

This commitment to simply saying “yes” has resulted in significant milestones for the campus recreation department.

Since the late 90s, club sports organizations have grown in number from 10 to nearly 40. The budget for intramural and club sports that once hovered around $25,000 per year now reaches over one million dollars for the campus recreation department.

“I was given a lump of clay and asked to build something special,” Floyd said. “No, Wake Forest campus recreation is no Michelangelo’s David, but during this almost quarter-century, we have made great gains.”

In fact, when Floyd arrived, there was no campus recreation. The program itself was known as intramural and club sports.

Where carpet squares once served as improvised bases for a game of softball, there are now solid plates. No longer are soccer games played in the darkness of night on Water Tower field or at Kentner Stadium. Bright stadium lights illuminate the all-weather sports field beneath players’ feet. Waterfall field, which now lies on the brink of Reynolda Village, once did not exist.

Each of these improvements materialized over the last two decades under the watchful care of an administrator who makes it part of his personal mission to connect with students.

Whether it be searching for help coordinating an intramural team or looking for a mentor to confide in, Floyd has been a consistent presence in many students’ college experience.

“My sophomore year I had to leave for a bunch of surgeries,” said Mitchell Loll, a senior who met Floyd by coincidence during his first visit to campus. “He was one of the first people I told and he didn’t try to offer any advice about it. Everyone tries to tell you ‘this is how you should handle it’ or ‘this is what I would do’ — I didn’t get a word of it. He just offered to listen and be there for me and I really appreciated that.”

Though his resumé includes time spent on the behind the plate for the Philadelphia Phillies and fishing on the deadliest catch ships in his home state of Alaska, Floyd is characterized by his humble spirit, tireless passion and encouraging smile for every person.

Beyond his supervising role as director of campus recreation, Floyd has hosted students in his own home for bible studies, welcomed first-year students at the beloved Pros vs. Joes event and given motivational presentations at a variety of leadership conferences.

Floyd delivered one of his many presentations at the NIRSA: Leaders in Collegiate Recreation region two conference.

“He got up there to speak, and he probably recited 20 quotes, five poems, eight or 10 stories,” Peele said, reflecting on how he felt as a member of the audience. “His ability to articulate all of this information is amazing — it’s like he’s an encyclopedia. It’s so inspiring to see.”

This inspiration has played a role in Peele’s career as well, encouraging him to accept a position as the director of campus recreation at the University of West Georgia.

“As a professional, on a daily basis it’s about that pride and passion for what you do,” Peele said. “After working with Max, you walk away feeling that way too. I mean, talk about a ‘salt of the earth’ kind of person. For him, it’s about doing good for others. If we could all be like that, what a world it would be.”

As the bricks for Reynolds gym continued to be laid and the future of Wake Forest campus recreation begins to materialize, there is one foundational aspect that has been paramount in its transformation: a passion to create an holistic experience that all members of the campus community  can enjoy.

Floyd said it best himself: