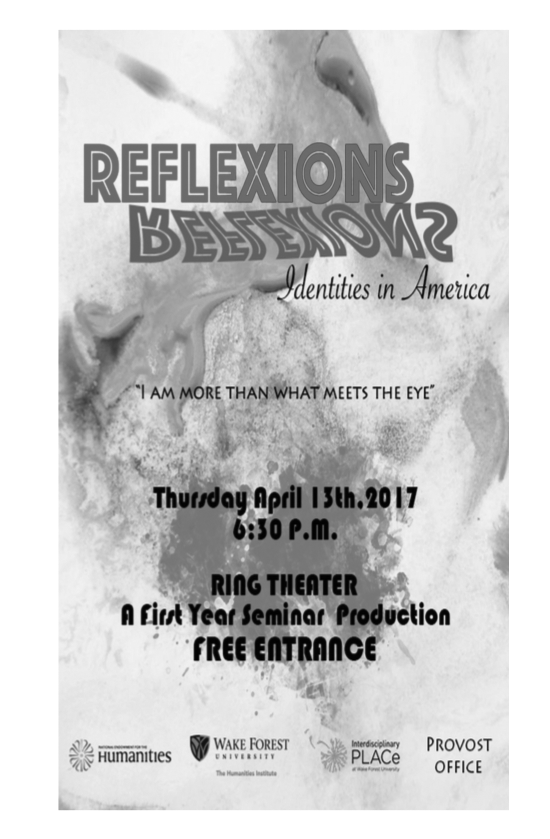 “I am more than what meets the eye” — the central message of the student written and directed play Reflexions, a social commentary that explores the concepts and stereotypes of gender, race, sexual orientation, identity, religion, politics and other polarizing identifiers that have become central aspects to every persons’ unique identity around the world.

Through this scope, freshmen enrolled in the First-Year Seminar (FYS) “Live and In Color: The Integration of Asian and Hispanic Cultures in American Society through Theater,” have explored how theater can teach important lessons regarding what it means to think about ‘others’ and how biases are formed on the basis of these trivial identifiers.

Focusing their readings on various works by Hispanic, Hispanic-American, Asian and Asian-American playwrights, the students have succeeded in gaining a level understanding and temperament that will help them empathize with the constant hardship endured by marginalized communities in the U.S. and around the world.

As agreed on by the co-instructors of the course, Teresa Sanhueza (Department of Romance Languages) and John Friedenberg (Department of Theatre and Dance), the aim of the class is to provide a “more holistic view of theatre that would give students tools, methods and context for broadening and deepening their understanding of their own and other cultures.”

The culmination of this semester of hard work and exploration premiered on Thursday, April 13, in the university’s Ring Theater.

Through the theatrical representation of four distinct monologues — each based off of student-conducted interviews, personal stories,and first-hand accounts, Reflexions brings to light this very dialogue of identity by exploring the polarizing identifiers and stereotypes that separate us.

The four monologues, each containing different perspectives of hardship, identity and stereotype, reveal the struggles endured by a Cuban immigrant. He faces the struggle of language barrier as he tries to raise a family in the U.S., a gay, black teen who can’t meet either his family’s nor society’s expectations, a conservative and white female who is the product many false labels on her college campus and a second-generation Chinese-American teen who feels restricted because of the identity assigned to her by society.

As each monologue was presented, the rest of the students in the FYS sat in the audience yelling stereotypes and offensive slang at each presenter — magnifying the hate and expectations that our society has demonstrated to communities of people who differ from the ‘norm.’ As a result, the class created clear contrast between society — represented by the students in the audience — and several marginalized communities, resulting in an extremely powerful theatrical representation.

After the play, freshman Rebecca Hill reflected on this contrast.“We’re all guilty of the things that society was portraying — judging a book by its cover, not spending the time to get to know someone’s story, labeling according to stereotypes, etc,” she said. By placing ‘society’ on the same level as the audience, they were equal.”

It was this contrast that made the final work so powerful — enabling the audience to think about and realize their own prejudices. As a whole, the work highlights the relevance of discussing these polarizing identifiers as well as the work that the greater Wake Forest community has in order to achieve a more accepting campus. Freshman Mary Britton Anderson in the class spoke to this idea saying “race shouldn’t be an uncomfortable topic and by having people uncomfortable by it just emphasizes how far we are from a truly inclusive and open minded community.”