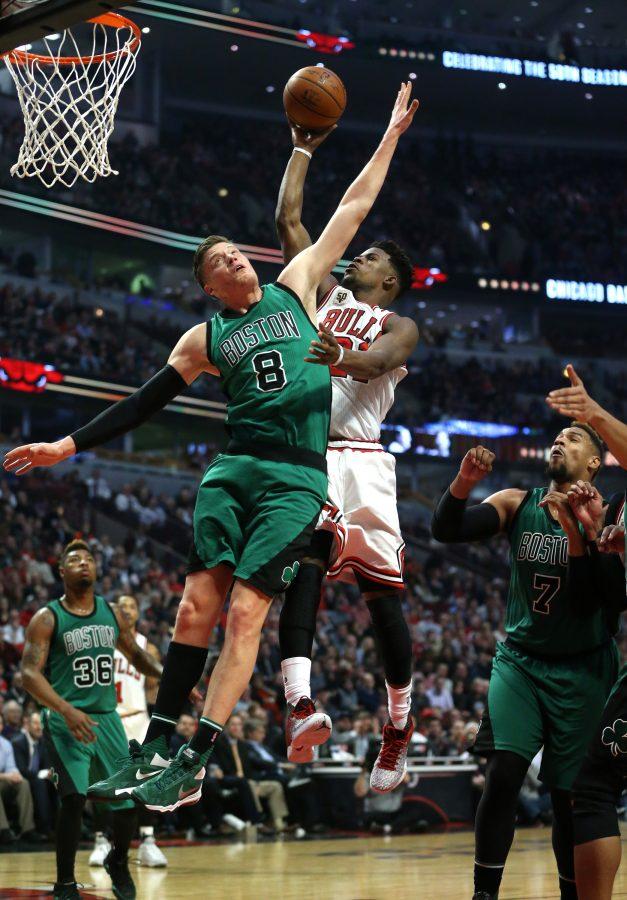 So far, this has been the most exciting and surprising series of the first round. All season, the Celtics, led by point guard Isaiah Thomas and a great defense, have been one of the best teams in the NBA and were even able to secure the top overall seed in the East for the playoffs.

However, after playing the first two games of the series at home in Boston against the No. 8 seed Bulls, they find themselves in a big 2-0 hole. Game one came down to the wire with Chicago coming out on top 106-102.

Game 2, however, was a very different story. The Bulls were up all game, and won by a score of 111-97. Bulls point guard and former Celtics star Rajon Rondo was overheard saying Boston “gave up.” Now the series heads to Chicago with the Bulls up 2-0 and the Celtics with a lot of work to do.

After two games, the Cavaliers are up 2-0, but these games have been very tightly contested. In Game one in Cleveland, the Cavaliers were lucky to win by a score of 109-108. LeBron James led all players with 32 points and 13 assists and his effort was just enough to hold off a fourth quarter surge by the Pacers.

The Pacers outscored Cleveland by a score of 24-17 in the game’s final quarter. However, in the game’s final possession with Indiana down by one, the Pacers could not get the ball to star forward Paul George who scored 29 points, and instead CJ Miles missed a buzzer beating shot.

After the game, George told reporters “I spoke to CJ about it. In situations like that, I gotta get the last shot.”

In Game two in Cleveland, the Cavaliers won by a score of 117-111. Cavs’ point guard Kyrie Irving led all scorers with 37 points

So far, this series has the makings of one of the first round’s best. The Bucks marched into Toronto and surprisingly took Game one. Led by Giannis Antetokounmpo’s 28 points and eight rebounds, along with Greg Monroe’s 14 points off the bench, Milwaukee was able to steal Game one from the Raptors on the road by a score of 97-83.

In Game 2, the Raptors bounced back and defeated the Bucks 106-100. Kyle Lowry, DeMar DeRozan and Serge Ibaka combined for 71 points.

In this series’ first game, the Wizards handled the Hawks fairly easily by a score of 114-107. The score indicated the game was much closer than it actually was as the Wizards took a large lead out of the third quarter and never looked back. John Wall looked like the MVP candidate many consider him to be, scoring 32 points and adding 14 assists. Bradley Beal and Markieff Morris added 22 and 21 points, respectively.

In this series’ first game, the Warriors won by a score of 121-109. Kevin Durant shined in his Warriors playoff debut, scoring 32 points and 10 rebounds. Defensive Player of the Year Draymond Green proved his worth making two remarkable blocked shots of Mo Harkless and Damian Lillard at the rim. The Blazers put up a great fight, with CJ McCollum and Damian Lillard scoring 41 and 34 points, respectively, but were simply no match for the league’s most talented team. Game two took place on Wednesday, April 19,  in Oakland at Oracle Arena.

After two games, San Antonio leads the series two games to none. In the first game, the Spurs rolled past the Grizzlies, winning the game by 29 points by a score of 111-82. Kawhi Leonard had a very efficient game, pacing all scorers with 32 points on 11-14 shooting to go along with five assists and his usual lockdown defense. As a team, the Spurs shot 54 percent from the field, including 52.6 percent from three-point range.

Game two, however, was much more competitive. While the Spurs came out on top 96-82, the game was much closer than the score would indicate. Leonard was phenomenal again in this game, scoring 37 points and adding 11 rebounds. In a post-game press conference, Grizzlies Head Coach David Fizdale complained about the officiating in Game two, which he believed heavily favored his team’s opponents. He called the officiating “unacceptable” and “unprofessional,” citing the lack of fouls called against the Spurs even though his team shot twice as many shots in the paint, yet Leonard took four more free throws than the entire Grizzlies team in the game.

In Game one of this series, the Rockets were simply too much for the Thunder and the Rockets won by a score of 118-87. The Thunder were unable to get almost anything going at all offensively, while the Rockets hardly missed, shooting 49.5 percent overall from the field. James Harden was phenomenal in every facet of the game, scoring 37 points with nine assists and seven boards.

Patrick Beverley was a big contributor for Houston, adding 21 points on 4-6 shooting from deep along with excellent defense of the Thunder star, Russell Westbrook. Westbrook had one of his worst games of the season, scoring just 22 points on 6-23 shooting, mostly thanks to Beverley’s tenacious defense. The Thunder looked to turn things around and make some adjustments in Game 2 which took place on Wednesday, April 19 in Houston, TX.

After two games in Los Angeles, CA, this series is all knotted up at 1-1. In the first game, Utah’s star center, Rudy Gobert, hyperextended and bruised his knee on the first possession. However, the Jazz, powered by Joe Johnson’s buzzer beater, were still somehow able to emerge victorious in Game 1 97-95 on the road without their best player.

Game 2 was very indicative of how the series will play out if Gobert is unable to return. Without the anchor of one of the league’s premier defenses manning the middle, the Clippers were able to use their star-studded frontcourt to dominate the Jazz in the paint. The Clippers won the game 99-91, scoring 60 of their 99 points in the paint.

Taking the best player off a team in the playoffs usually means its demise, but if the Jazz can hang around long enough in this series for Gobert to play some meaningful minutes and maybe steal the series from the Clippers.