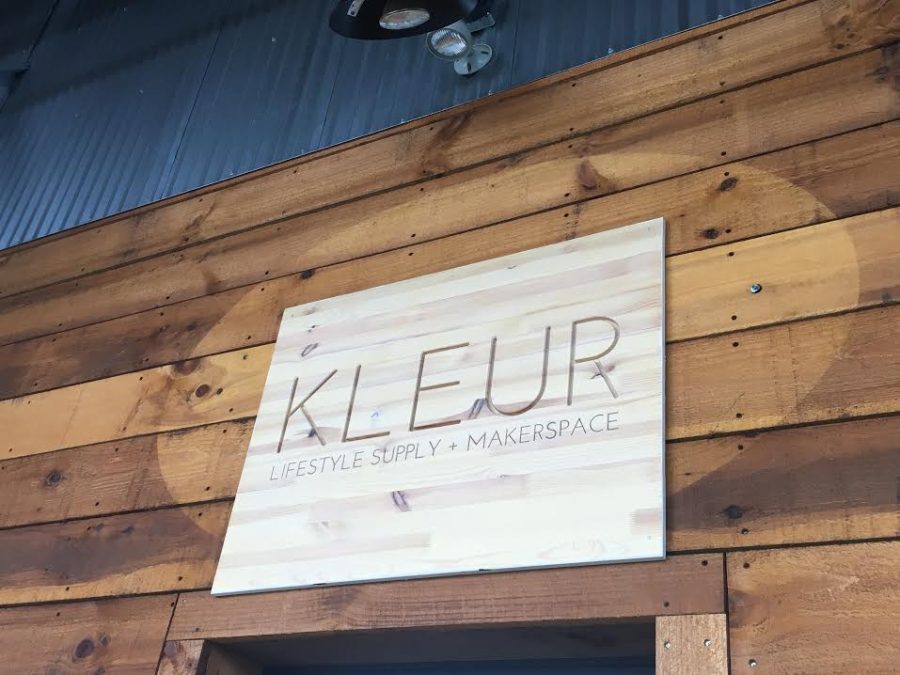 “Is this the chocolate shop?” a lost shopper asked as she poked her head through the doors of a boutique in downtown Winston-Salem. Founder and owner of Kleur, Molly Grace, erupted in laughter, replying, “I wish!”

Grace, an artist, mother, activist and entrepreneur, opened up shop in September 2016 on Trade Street, right next to Black Mountain Chocolate. In a space flooded with natural light, handmade home goods, accessories, jewelry and clothing are thoughtfully dispersed on racks and tables for sale.

Kleur also offers workshops and seminars in the comfy back room of the shop.

But Grace is also an advocate for human rights of all kinds.

Most recently, she has spoken up against the recent billboards on Interstate 40 between Greensboro and Winston-Salem. The first of these reads: “Real men provide, Real women appreciate it.” The most recent displays “Real men don’t use coupons.”

After the first billboard went up in February, Grace organized a protest with a turnout exceeding 100 people. As the issue drags on, news stations continue to ask Grace for comments, especially in reference to the new billboard messages.

“It’s all just a monstrous attempt to shame women,” Grace said. “It’s the same message every time, and I’m tired of responding.”

But for Grace, activism is nothing new. Her dedication to human rights issues plays a large role in her business as she hosts community discussions as well as artistic craft workshops in the back room of Kleur. These include ‘photographing the birth cycle,’ indigo dyeing, and ‘accessing and activating empathy,’ which Grace teaches.

Unlike most, Grace can remember the exact day she accessed empathy: September 11, 2001. She was a middle school student cutting gym class to sulk under the bleachers and writing “brooding poetry.” But when she returned to class, she saw footage of the planes colliding with the Twin Towers and became aware of a world outside of herself.

“I realized I wasn’t as important as I thought I was,” Grace said. “I later learned that feeling was empathy.”

Grace is familiar with middle schoolers. She taught them for several years as an English teacher at Paisley IB Middle School and the Arts Based School in Winston-Salem. She hopes to bring her passion for teaching to adults now by offering affordable workshops, none of which exceed $30. With these prices, Grace hopes to present a source of empowerment to people with lower incomes. But these prices also appeal to college students, since Winston-Salem is home to four major colleges and universities.

“We want to offer a space for college students to be in the community,” Grace said. “They’re not just workshops. They can be a life-building practice.”

Grace also wishes to share her love of words by offering free used books to anyone who walks through the door. Books add to the variety of goods the shop offers, such as handmade home goods, accessories, jewelry and clothing.

With the multitude of responsibilities that come along with owning her own business, Grace finds the most joy in meeting with vendors, as one artist to another. Grace has dipped her toe in many different art forms over the years, from writing to painting to singing and songwriting. Currently, Grace focuses on music as her artistic outlet. She is part of a duo called Grace and Nails with local musician Tyler Nail.

The pair found each other when Grace opened for him at The Garage, a music venue in downtown Winston-Salem. From there, they covered a Tom Waits song and realized they weren’t done working together. For the past two years, they have been in the process of recording an album of original songs.

“It’s been a very slow process,” Grace said. “We don’t have a lot of time because we both work hard.”

However, the duo has written half a dozen songs and continue to collaborate. Like any partnership, their collaborative process involves give and take, as they push each other to take creative risks.

“Molly has a unique balance of willingness to influence, and willingness to be influenced,” Nail said. “Artists often have such a fear of giving someone else any room to persuade a piece.”

Another partnership in Grace’s life is with her employee and friend Allison Beilharz, who has worked for Grace since October 2016, after Grace parted ways with previous partners and designers Amanda Vaughn-Redmond and Emma Wallace, who had shared a shop with her on Sixth Street.

Beilharz contacted Grace about a job, to which Grace replied, “Job? I can’t give you a job. But I can be your friend!” Grace proceeded to connect Beilharz to people in town who could help her, as well as giving her career advice.

The friendship and mutual respect between these two is obvious, as they hollered playful comments to each other across the shop during a recent visit. Beilharz has a background in marketing and branding and uses this expertise to compliment Grace’s aptitude with the creative side of the business.

“Molly has so many ideas jumping around in her head at all times, and then she actually does them,” Beilharz said. “It’s inspiring to be around that kind of energy.”

It’s that energy that allows Grace to balance being a mother to her six-year-old son, Abbott, with activism and creativity, as well as owning and running a business.

But she is also quick to credit other entrepreneurs in town who have supported her and her vision, such as Mary Haglund, the owner of Mary’s Gourmet Diner, located across the street from Kleur.

“I’ve gotten to the point where I know a lot of the entrepreneurs in town,” Grace said. “But Mary has been a great source of comfort and advice.”

As Grace looks ahead, she hopes to get more people through her doors to participate in community discussions. Through honest conversations with a varied group of people, Grace believes community is born and sustained. It is this commitment to authenticity that guides the way she runs her life, and therefore, her business.

“Sometimes I’m embarrassed and think ‘This could look better,’” Grace said. “But I value transparency in the real world and I like the messiness of what we do.”