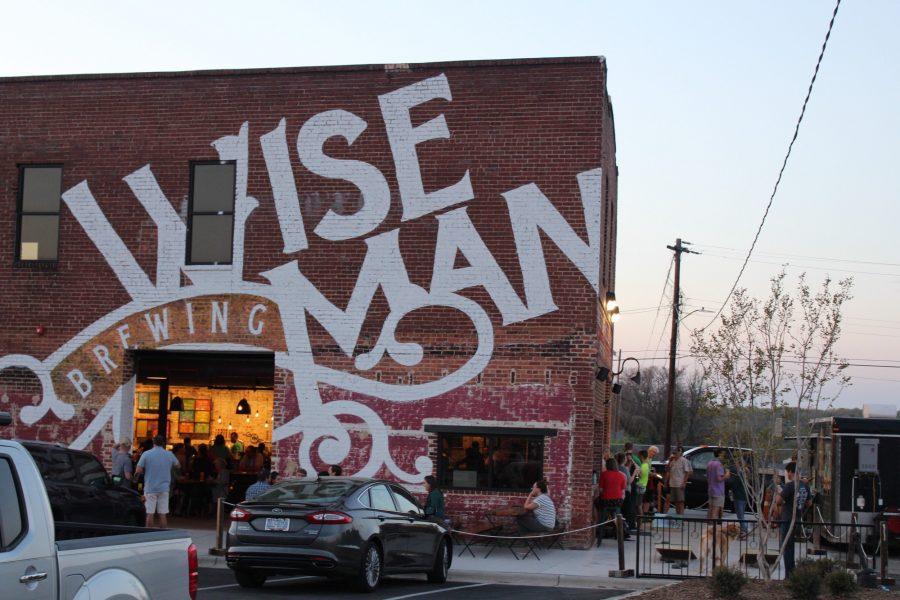 The sounds of toddler’s feet echo across the clean, concrete floors. Dogs roam freely in the open space, weaving between aluminum chairs and wooden tables.

Just a few years ago, this vast space sat vacant and deserted. After Angelou Brothers Wholesale closed in 2008, the brick building joined a row of desolate downtown Winston-Salem buildings in desperate need of new life.

Now, on a Tuesday night at 7 p.m., families are lined up at a food truck outside Wise Man Brewing. The windows are open, the beer is flowing and the tables outside are packed.

Wise Man resides in one of the many downtown buildings that have been repurposed in recent years. Located on the outskirts of downtown next to where Ziggy’s once was, the building is two blocks from Mary’s Gourmet Diner and five blocks away from the Innovation Quarter on Patterson Avenue. The Innovation Quarter is a prime example of the drive for renewal that has taken root downtown. The area is composed of Reynolds tobacco buildings that have been transformed into Wake Forest University undergraduate classrooms, labs and nearby lofts.

Wise Man hosted its grand opening on March 25. Mayor Allen Joines, Councilmember Derwin Montgomery and members of the Winston-Salem Chamber of Commerce cut the ribbon. The entire ceremony celebrated how far the downtown area has come and the exciting future that still lies ahead.

“At the grand opening, Mayor Joines talked a lot about how years ago no one would ever even cross over this road,” said Ryan Jackle, who helps to man the brewery at Wise Man. “It’s mindblowing to see how far this city has come, this whole area of Winston.”

The idea of Wise Man began 10 years ago when chemist Sam Victory joined forces with friends Jason Morehead and Mike Beverly to turn their home brewing hobby into a business. Construction began in October 2015 by replacing the roof of the Angelou Brothers building and lasted a full 16 months. The end result was a brewery adjacent to a spacious taproom that seats 80 people as well as an outdoor beer garden whose walls are adorned with colorful murals.

The company is mainly focused on creating a family-friendly, community atmosphere. The Wise Man team has been adamant about not serving liquor, and closing before midnight.

“We aren’t a bar,” said Harvey Williams, Wise Man’s taproom manager and social media master. Williams is originally from Portland, Maine where he was a high school science teacher. “We’re a taproom. We made a conscious choice to only have a couple TVs and they’re pretty hidden. We want people to bring their families and dogs and play board games and actually talk to each other. That was central to opening Wise Man — That’s our identity.”

Wise Man is not your typical brewery in any sense of the word. Instead of consistently offering the same flavors, the team is constantly innovating and testing out new brews and ingredients. They serve their own beer and have UpDog Kombucha on tap.

Yet another atypical characteristic of Wise Man Brewery is that they host yoga on Tuesday nights. For eight dollars, customers take a yoga class and are treated to a pint afterwards.

“If it’s pretty we host it outside,” Williams said. “The yoga on Tuesdays and trivia on Mondays have been crowd-pleasers so far. Especially with the trivia, it’ll get pretty packed in here before it starts.”

Word about Wise Man has spread quickly among the Wake Forest community, with many students making the short trip downtown to try it out, and passing along rave reviews to their friends.

“I really want to try it out now that I’m 21,” said junior Olivia Blute. “My friends went last weekend and sat outside and played games while they had their beers. It seemed different — not like every other bar. It has games and activities you can do, so it isn’t just about drinking.”

“You feel like it’s truly a family atmosphere,” she said. “Kids can play games and everyone brings their dogs. I do Foothills trivia on Tuesdays, and I love that Wise Man is doing trivia on Mondays now.”

Although Wise Man does not offer their own food, they invite a different food truck to park outside the building every day. The schedule of food trucks is kept up-to-date on Wise Man’s website.

“We have a wing truck, we have a taco truck, a burger truck, a BBQ truck,” Williams said, counting with his fingers. “Just about everything you could think of. We like to spice it up.”

Word about the brewery has spread around the Winston-Salem area as well. Local restaurants and beer bars, such as The Beer Growler, now sell Wise Man on tap. Wise Man also recently joined the Downtown Arts District Association and will participate in First Friday gallery hops and provide a wall space for local artists.

“Our wall is just begging for an art exhibit,” Williams said. “We want to join the downtown arts scene because we’re right on the edge of it, so we’re a perfect place for local artists to showcase their work.”

The Wise Man crew is always looking for ways to improve.

They are expanding as they transition from a brand-new business to a brewery with a growing number of regulars that stop by everyday after work.

“The acceptance has been overwhelming,” Williams said. “I think people were waiting for a place like this to open downtown. We’re the fourth craft brewery in the city but we’re a little bit different because we’re on the outskirts, so we’ve drawn in a lot of people who don’t usually go downtown.”

This on-the-fringe-location has contributed to their growing popularity. The team just installed two new fermenters and are increasing weekly production. Williams said they will stay true to their small business roots, but are ready for the road ahead.

“You take it all in when you walk in the door — all the character and the history,” Williams said, motioning towards the tables made from reclaimed wood from the original Angelou Brothers building.

He smiles and shakes his head.

“Opening the doors was just the first challenge.”