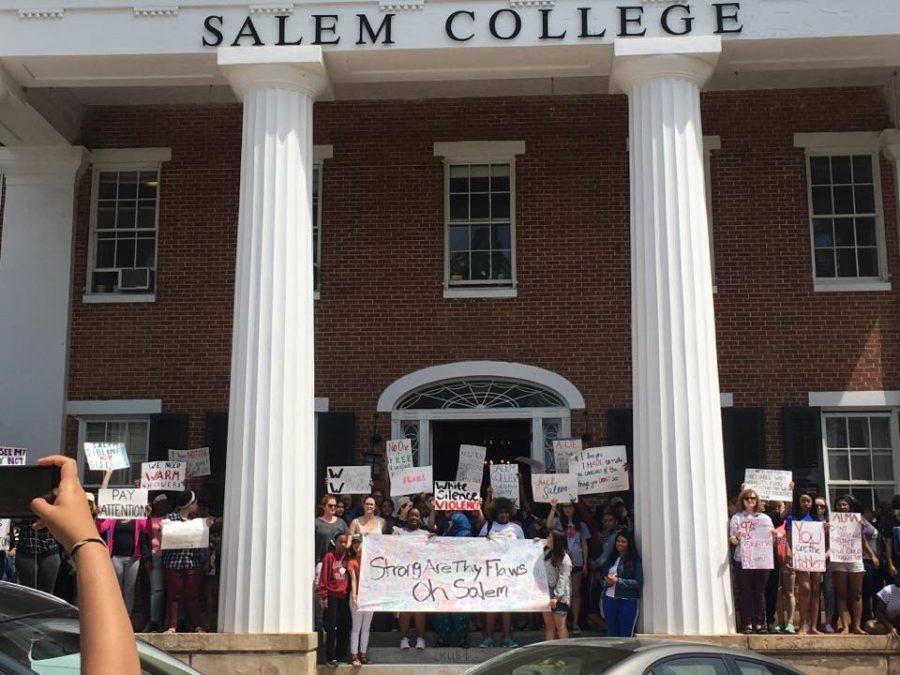 In 1772, four years before the Declaration of Independence was even signed, Salem Academy and College was founded as a Moravian educational institution.

Originally a lower school academy for women, Salem College is now considered the oldest continuously operating educational institute for girls and women in the U.S. However, despite its historical prestige, Salem today is not free of its share of modern issues that challenge the successful future of the institution.

Since Monday, April 10, a group of over 100 women joined together in a sit-in to protest the administration on many issues that have been plaguing the school for years. Salem College has a group called Committee on Community that joins students, administration and professors together to discuss campus issues. For years, this committee has simply discussed existing tensions on campus without achieving any justifiable results. The sit-in marks the first time students decided to take action.

“Salem College claims to stand for diversity, and yet this campus is wrought with racism, sexism, homophobia, transphobia, classism and ableism,” said Karina Gonzalez, a member of Committee on Community and one of the sit-in organizers. “The discrimination that permeates every facet of this campus manifests itself in a multitude of ways, including microaggressions and overt discrimination. It’s past time we take a stand for diversity, for representation, for a community that holds people accountable and for one that embraces difference.”

According to Salem College’s website, the institution ranks among the most racially and ethnically diverse in the state. However, the sole existence of diversity on a campus does not necessarily equate to proper treatment or total equality implementation. Since the recent election, committee meetings have become increasingly more tense as campus dynamics also shift.

“One day at Committee on Community we were talking about [President] Donald Trump again and I just got so angry and started to yell,” said Leniece Linder, another organizer of the sit-in. “This should make us angry, we should be upset that discrimination is going on. All our group ever does is talk and this was the first sentiment that kind of started everything. It started out as just me and eight other people who wanted to do something at this school.”

Within a few days the boards were completely filled with writing, sharing the written words of frustrated Salem College women.

In response to these clear campus-wide grievences, Linder and four other women decided to draft a call to action voicing their concerns. They met for multiple hours every day for weeks, eventually completing a 10-page document. The call to action lists explicit steps for the administration to take, specifically mentioning those of the board of trustees, administration, faculty and the general Salem College community.

“The call to action came out of various conversations and things that have been happening on campus for a long time about lack of accountability from administration, transparency, living conditions, basically everything,” Gonzalez said.

After finishing the call to action document, organizers decided to truly take action. On April 10, in every class starting at 11 a.m., a representative was chosen to stand up and give a speech voicing their discontents. At the end of the speech, the representative urged women to go to Main Hall to participate in a peaceful sit-in. For those that did not have class during that time, representatives were also stationed throughout campus.

Since the first day of the walk out, over 100 women have sat in Main Hall, the primary academic building where the dean’s offices are located, to share their discontents.

“Despite the unfortunate circumstances that brought us together, I can’t think of another time Salem students have stood up for each other with such unwavering solidarity,” said Sarah Vick, a student participating in the sit-ins each day. “We’ve chanted, cheered, had both light-hearted and serious conversations, spoken to President Sterritt and other members of administration and just chilled out.”

Although inherently a long, slow process, negotiations with administration and faculty about tangible results are in initial stages towards reconciliation. For so long these conversations have brought no results, but for the first time the administration is beginning to wield their power to the demands of the peaceful protestors.

“Our deans have committed to increase diversity training to twice a semester for the administration,” Gonzalez said. “They also committed to creating a bias response team to deal with issues of discrimination, which is a huge step in the right direction because it takes the absolute power from deans and gives it to a group where more people can be held responsible. I’m happy so far but we have a long ways to go. We are still sitting in.”

President Sterritt responded to the sit-ins in an email on Tuesday, April 18  with more steps towards reconciliation. Among the steps were commitments to increased diversity trainings, prioritizing residence hall renovations, adding counselors of color and those who identify as LGBTQ to the center and a reiteration of the many services already in place.

Despite the ongoing frustration and tension  between students and those in power, rhetoric around campus unity ensues. The sit-ins at Salem College are not intended to dismantle the institution — they are meant to do the exact opposite.

“The one thing we have all been saying is that this is out of a love for our school,” Linder said. “This school can’t sustain itself anymore treating its students like this. The retention rate is abysmal here. Everybody is leaving. The sit-in is out of a love for this school, in that we all want it to continue to exist.”