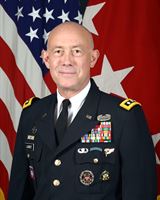 On Tuesday, April 18, Wake Forest University had the honor of hosting Lt. Gen. Charles Luckey, the Chief of Army Reserve and Commanding General.

Lt. Gen. Luckey has served in a variety of roles throughout his career in the military, including being an Infantry Officer in mechanized and special forces units, serving with the 82nd Airborne at Fort Bragg, serving as Commanding General of the 78th Division of the Army Reserve, Chief of the Office of Security Cooperation in Baghdad and Chief of Staff for North American Aerospace Defense Command and Northern Command (NORAD).

Suzanne Reynolds, Dean of Wake Forest School of Law, joked that Lt. Gen. Luckey’s most important and favorite responsibility might have been tracking Santa Claus on Christmas Eve while serving at NORAD.

Lt. Gen. Luckey’s current position,  the Chief of Army Reserve and Commanding General, places him in command of over 200,000 Army Reserve soldiers who carry out civilian lives and jobs in addition to their responsibilities to the Reserve. Lt. Gen. Luckey’s conversation with Professor Phillips centered around the lessons he has learned from progressing through the command structure and the importance of professionalism in successful leadership, a journey he has appropriately named “The Road to Awesome.”

Lt. Gen. Luckey expressed the importance of three major points: Leadership, Energy and Execution. In order to fulfill the needs of these points, Lt. Gen.Luckey spoke about the necessity of leaders unleashing the power of their team. Lt. Gen. Luckey regularly reassures his soldiers and leadership team that as long as they are acting with the right intent and staying within the given guidelines, he will have their back. This empowers other leaders to tackle the myriad of responsibilities and tasks of the Army Reserve without having to constantly seek approval from top commanding officers.

“It’s important to continue to study outside your normal domain,” Luckey said. “Don’t always listen to the same media outlet. We have to be intellectually rigorous, particularly in the modern age.”

He expressed that intellectual fitness is essential for doing the right thing and living up to the responsibilities of leadership. Intellectual fitness becomes an important part of unleashing the power of the team by clearly expressing guidance to team members.

A first-year student in the audience, Suzie Camp, was impressed with Lt. Gen. Luckey’s insight.

“I thought he had a lot of good things to say about leadership being something that is gained through experience and is used to empower other members of the team,” Camp said. “Learning more about the Army Reserve and the important dual role Reserve soldiers play as civilians and soldiers was really cool.”