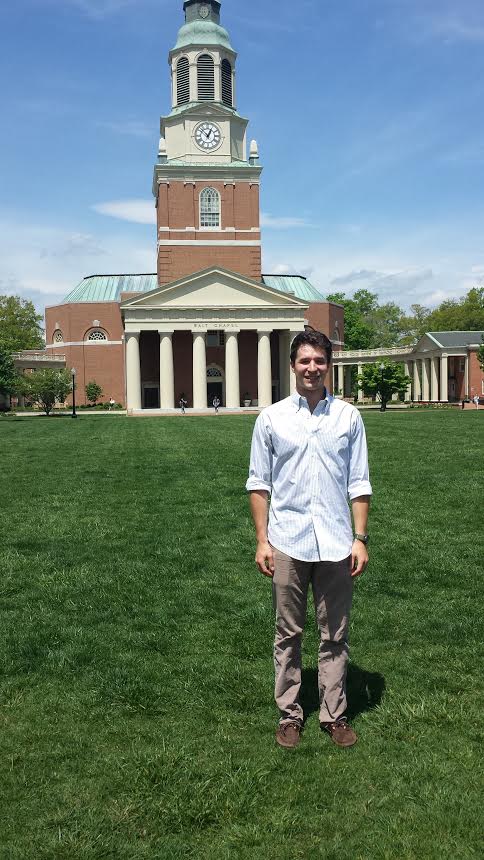 At first, Robbie Wood Baldwin did not know if he would like to study at Wake Forest, but grew to love his time here.

“I was confused about what I wanted to study,” Baldwin said. “I  first thought that I would study in the humanities, but after taking a biology course, I changed my mind.”

Baldwin found that the biology department would provide avenues for the pursuit of his personal interests, including ecology and economics. Besides his major in biology, Baldwin also achieved two minors — one in environmental studies and the other in economics.

“I believe that with my interdisciplinary background, I could potentially help find market-based solutions to the big issues facing our planet today,” Baldwin said.

His favorite class in his major was biology 214, where he studied ecology for the first time in college. It was this class that set Baldwin on the course for an environmental studies minor and future research.

“The small-class size in the biology department and the one-to-one attention that professors give to students really set it apart for me,” Baldwin said.

The relationship of respect and hard-work was reciprocal between Baldwin and his professors. His academic advisor, professor Miles Silman, lauded Baldwin for his commitment to his classes and to his research.

“He has shown all the hallmarks of a top scientist, from lively participation in the lab, careful thinking into experimental design all  the way to presenting his results at a national meeting and in a publication,” Silman said.

“He shows a dogged pursuit of his experimental goals,” Silman said, “going each week to Pilot Mountain and even hiking tens of miles at times with heroic amounts of corn on his back.”

Baldwin took measured deer populations all throughout the state park, providing much needed information on its delicate ecosystem.

His research advisor, Jared Beaver, spoke about the impact of Baldwin’s research.

“Baldwin’s research will help guide decision making and improve deer herd management for wildlife managers regardless of sector,” Beaver said. “Additionally, this will be one of the most comprehensive deer-survey studies ever conducted in North Carolina State Parks’ history.”

As Baldwin shows record amounts of ambition in his research, so too does he show his personal commitment to his friends and teammates.

“My favorite part about being at Wake Forest was playing club hockey,” Baldwin said. “They are a great group of guys and a very important part of my time in college.”

Baldwin is sad to leave the club hockey team and field research upon graduation, but can look back to the positive impact he created at his time at Wake Forest.

“It has been a pleasure overseeing and assisting with his undergraduate research work,” Beaver said. “From a personal standpoint, it is very apparent that Robbie is an intelligent and motivated individual.”

Baldwin wishes to pursue a career in research or consulting, all the while continuing to engage with his passion for conserving the environment and solving problems.