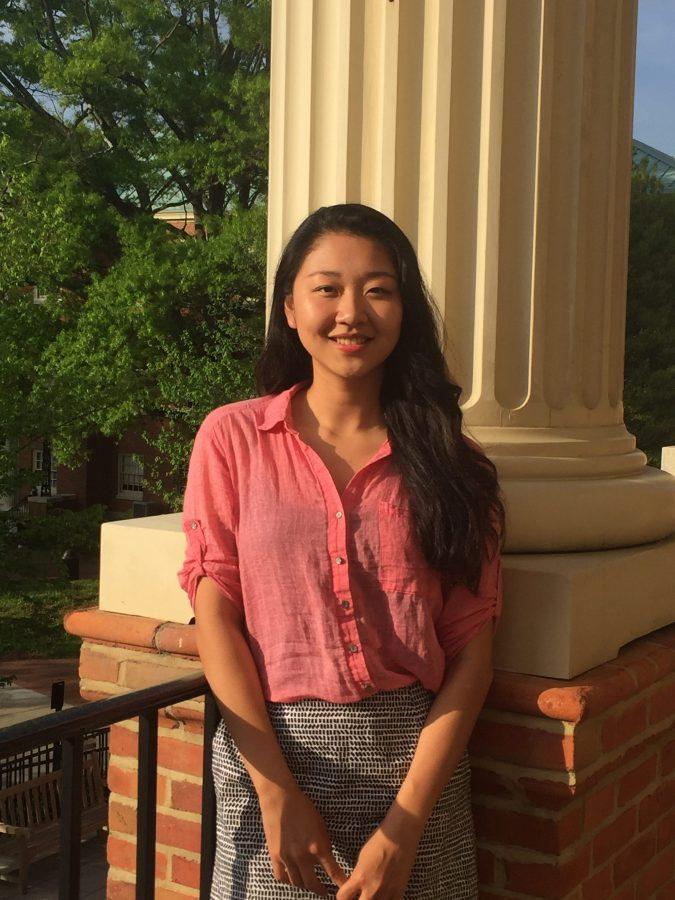 Initially, Margie Feng simply wanted to be able to speak to her grandfather, a French professor in China, in French.

“I didn’t want to be a major at first,” laughed Feng. “I just wanted to be able to start a conversation.”

Four years later, the French department is graduating an exemplary student and scholar of the French language, culture and everything in between.

Feng, a double major in French and communication and a minor in journalism from Shenzhen, China, has taken full advantage of the resources offered at Wake Forest to immerse herself in the study of the language.

When the French Club was looking for a president during Feng’s junior year, she volunteered, and found herself growing to love getting to know people from different backgrounds who shared a love for the same language.

“We started a conversation hour, and I had so much fun meeting  so many people from different places who love French,” she said. “We gather and talk about French and speak French, and that was a really good experience that motivated me to study French.”

During Feng’s tenure as French Club President, she oversaw the creation of many cultural events, such as cheese-tasting, that brought together the French-speaking community at Wake Forest.

The summer after her junior year, Feng found herself studying abroad in Tours, France, living in a home stay and truly immersing herself in the culture. Feng counts this experience and her summer study abroad experience in Rome with the journalism department as some of her most cherished times throughout her career at Wake Forest.

“I studied abroad twice, with the first time being in Rome with the journalism department and the second in France with the French department,” Feng said. “Both programs didn’t disappoint and were the best experiences I’ve ever had.”

Feng was especially empowered by the status that women have in society in France.

As the only Chinese student her year in the French department, Feng has found that although her double major of French and communication is uncommon among international students at Wake Forest, her study of languages and communication has given her a unique skill set and perspective in her time on campus.

“I have a lot of passion for French,” she said. “The language is very beautiful, and obviously the culture is too.”

Feng has a hard time picking a favorite professor in the French department, but she’s absolutely sure that they all are committed to giving students a pathway to success.

“They truly want their students to learn French, and they truly want to help them,” Feng said. “Even though I have a communication major, I have a stronger connection with the French department.

Although she doesn’t know if she’ll be able to utilize French directly in her pursuit of a Masters in journalism at the University of Southern California next year, Feng has no regrets in her studies at Wake Forest.

“It’s important to study what you like,” she said.