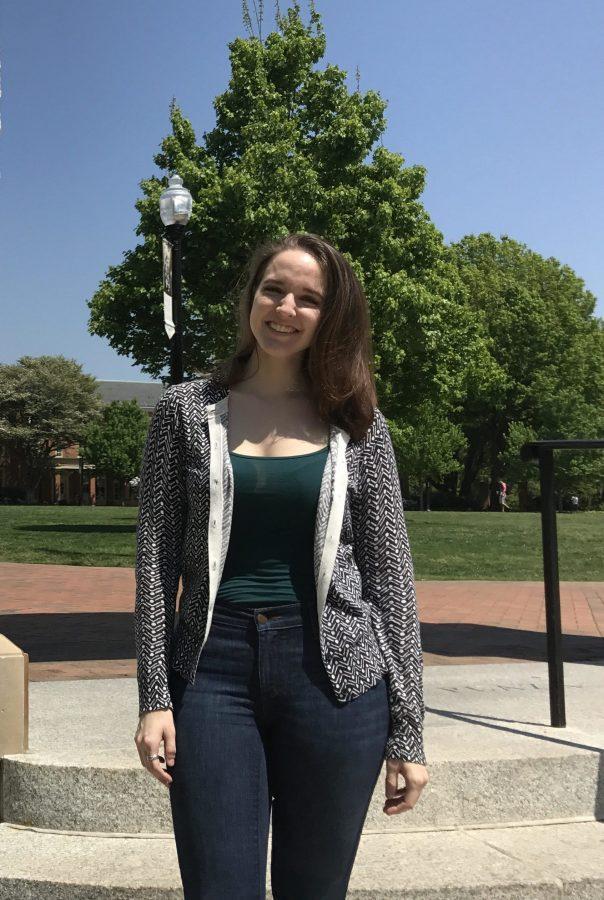 Elizabeth Krizay, a statistics major from Lagrange, Georgia, is noted by many of her professors for her independent spirit, her intuitive questions and her ability to lift up those around her.

“She makes the class atmosphere better for everyone,” said Rob Erhardt, a professor in the mathematics department. “It’s fun to watch her bring out the best in other Wake Forest students.”

Multivariate Statistics, taught by Erhardt, is one of Krizay’s favorite classes she has taken at Wake Forest. Additionally, Krizay decided to take up a minor in German after being introduced to the language her freshman year.

“I really got into it and loved it because the German department is very similar to the statistics department in that the professors are very invested in your college career,” Krizay said. “The professors in both departments are wonderful, super helpful, kind and just excellent people.”

“Elizabeth is an exceptional student and recipient of the 2017 Phillips Prize for outstanding graduating student in the Department of Mathematics and Statistics,” said Dr. Kenneth S Berenhaut, who has been Krizay’s academic advisor and a key mentor throughout her college career. “Elizabeth is intelligent, creative and highly competent, but also modest, pleasant and caring … Working with her has been an immense pleasure.”

Although her concentration is in mathematical statistics, Krizay is also minoring in both German and computer science and has a strong passion for the arts.

“My main passion would be the arts and music, and being able to incorporate that with the scientific aspects of my career and what I’m going to be doing,” Krizay said. “As far as math and my trajectory in life goes, I would say that right now I’m leaning more towards data security or network analysis.”

When asked what she will miss most about being a student at Wake Forest, Krizay said she will miss the companionship she finds with both peers and mentors on campus.

“I will miss the beautiful campus, because Wake Forest is just gorgeous, but I’ll also miss the relationships I’ve developed with professors and friends here,” she said. “That is going to be hard to leave.”

Krizay also noted that she will miss spending time with her a capella group, Innuendo.

“I am such a music person, and I love singing,” Krizay said. “It was a huge part of my life in high school, being very involved in literary competitions and singing competitions, and I didn’t want to let that leave my life. I really wanted to find an organization that was very focused on singing and Innuendo has been that for me.”

Some of her most memorable experiences on campus include performing in her first concert with Innuendo and recording their CD.

“I’ve had a lot of memorable experiences, but those two are what stick out to me,” she said.

When not singing or doing coursework, Krizay was also active in math club, and was an editor for The Pub, an online literary magazine.

After graduation, Krizay will be studying at Georgia Tech’s PhD program in Industrial Engineering with a concentration in statistics.

“As much as I do love Wake Forest’s campus, and how small and insular it is, I am really looking forward to being in Atlanta with the big city atmosphere,” Krizay said. “I’ll be about an hour away from home, which is great because I’m really close with my family.”

When asked what advice she would give to her freshman self, Krizay said, “Try more things and don’t be afraid of failure. It’s going to prevent you from experiencing new things in life and meeting people.”