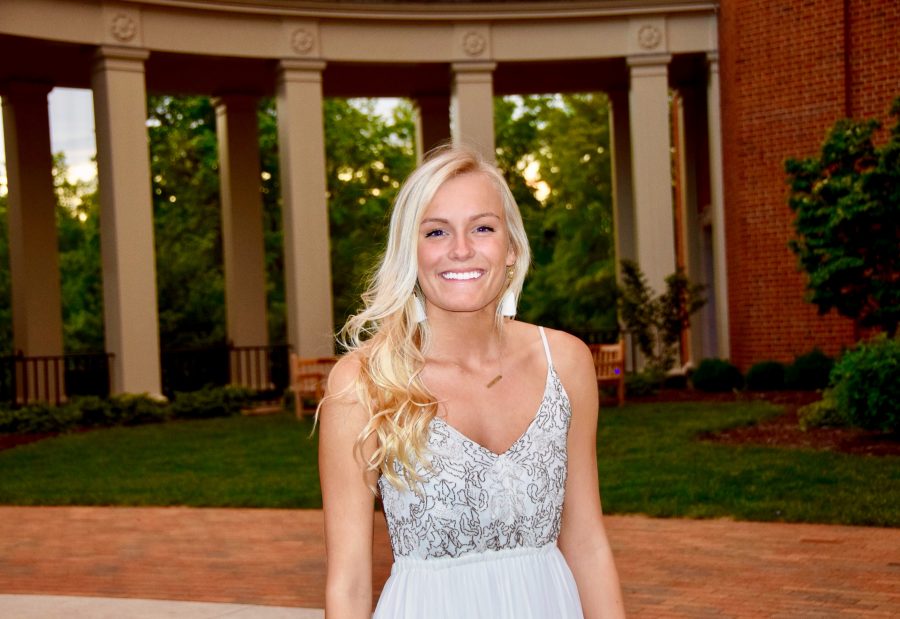 Before coming to Wake Forest, Nicole Gertenbach had no idea she wanted to major in psychology. She never took a psychology class before her freshman year. However, she took an introductory class and quickly fell in love with the field.

“Something that I liked about it initially is that it’s scientific,” Gertenbach said. “Psychology is really concrete and there’s empirical evidence for everything. There’s a specific process that you go through to test different ideas that start as abstract and then get brought down to the empirical level.”

One of Gertenbach’s favorite experiences and greatest accomplishments as a Wake Forest student is her work as a research assistant for Julie Wayne, an associate professor in the Wake Forest University School of Business specializing in industrial/organizational psychology. Wayne’s research idea that Gertenbach helped bring into fruition was “about how disabilities affect peoples’ desire to work with someone on a team in the workplace,” Gertenbach said.

Speaking on Gertenbach’s character, professor Wayne said, “she is enthusiastic and self-motivated and brings a very strong foundation from her psychology courses in research methods. I was able to trust her with significant aspects of the project due to her strong work habits, such as timeliness and attention to detail and high quality. She has invested a lot of time in our project and she didn’t do it for a grade or because she had to, but because she is genuinely interested in applying her coursework, learning new skills and becoming the best she can be.”

Gertenbach particularly enjoyed seeing the project grow from its onset as a research idea all the way through putting it into a method and then testing it on three Organizational Behavior classes. Wayne is still awaiting the results of the research as the testing was done only a month ago. Additionally, Gertenbach excelled outside of her pursuits in psychology. Gertenbach is also a communications major.

In terms of extracurriculars, she was involved in her sorority, Kappa Kappa Gamma. During her time at Wake Forest, she also pursued her passion for lacrosse. Since freshman year, Gertenbach has been played for the Women’s Club Lacrosse team. This past year, she served as the club’s president and team captain. Gertenbach also used her love for lacrosse to get involved in the Winston-Salem community. Since the end of her freshman year, she has served as an assistant coach for the Reynolds High School girls’ lacrosse team.

During her time as a Wake Forest student, some of Gertenbach’s fondest memories were cheering on the Demon Deacons sports teams, particularly the football and men’s basketball teams. Her favorite sporting even during her four years was the football team’s victory over Temple University in the 2016 Military Bowl in Annapolis, MD, not far from her home in Northern Virginia.

Gertenbach will miss many things about her time at Wake Forest, most notably her friends and the great sense of community she senses as a Demon Deacon. She will especially miss the tight-knit community that comes with a small school like Wake Forest when she moves to New York next year to start working at AlphaSights, an information systems company that specializes in connecting clients with field experts all over the world. At AlphaSights, Gertenbach will work in an associate role which includes both research and sales/negotiation.

Gertenbach hopes to eventually return to graduate school and earn her PhD in Industrial/Organizational Psychology.

“Above all of her academic talents, she is a wonderful person and a joy to work with,” Wayne said. “I wish her the very best in her future career and I hope I can persuade her to continue research and pursue her PhD.”