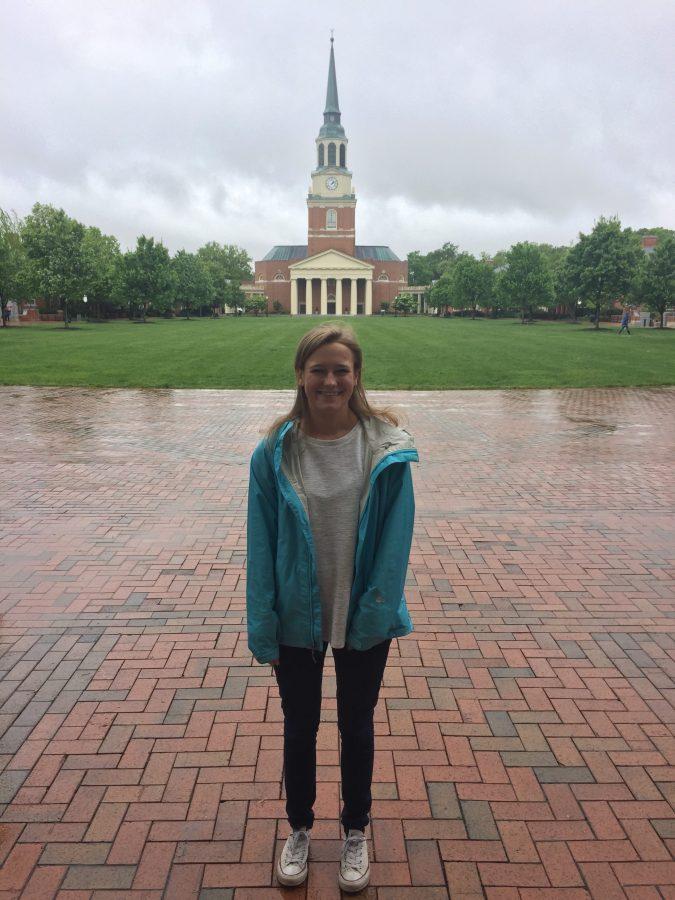 Senior Annie Wheat fell in love with Wake Forest when she visited campus for the first time.

She felt a sense of community during that first visit and knew right away that Winston-Salem would be her new home.

Majoring in both Spanish and mathematics, Wheat found time to get involved with both departments, her sorority, as well as a number of other organizations on campus.  She has been active each year in a variety of campus-wide service opportunities, including Wake N’ Shake and Project Pumpkin.

In the fall of 2015, Wheat traveled to Salamanca, Spain with 16 other Wake Forest students to study the Spanish language through the immersive experience of living with a host family. She took classes taught exclusively in Spanish and studied at the University of Salamanca.

“I really loved the small town feel of Salamanca,” Wheat said. “It was perfect for my study abroad experience. Initially I was really nervous about living with a host family, but by the end of the semester, I found it to be one of the highlights of my experience.”

While in Spain, Wheat and the rest of the Wake Forest program had the opportunity to travel to the center and south of Spain, as well as to the northwest.

Wheat credits these multi-week group trips as the reason her group became so close.

“Our group consisted of only girls, which was hilarious, but great, as we all became best friends,” Wheat said.

Wheat is also a linguistics minor, which has provided her with some of her most memorble courses. One of these courses was a class focused entirely on obscenities taught by professor Billy Hamilton.

“We would literally talk about the f-word and have a class discussion about it,” Wheat said. “I actually learned a lot in this class, don’t get me wrong, it was just always interesting walking in at 9:00 a.m. to discuss obscenities.”

Wheat has certainly thrived in the classroom while studying here at Wake Forest, as evidenced by a number of professors. However, professor Jane Albrecht in the Spanish department, especially admired Wheat’s work ethic and contribution to the classroom.

“Annie Wheat is a very original thinker,” Albrecht said. “When she approached me about directing her honors thesis in Spanish, I jumped at the chance as I knew something special would result.”

Albrecht explained that Wheat’s thesis was quite unique.

“Her thesis is an innovative contribution to the literature on the women characters in Lazarillo de Tormes, the picaresque novel first published in 1554 and extensively commented on over the past century.”

As Wheat reflected on her time at Wake Forest, she shared that she would miss the annual Lovefeast and daily walks across the quad the most.

In her finals days on campus, Wheat plans to spend time with friends and having some final picnics on the quad as an undergraduate.

And while she is unsure of her plans after graduation, she is currently considering graduate or law school and hopes to continue using her Spanish in some way.