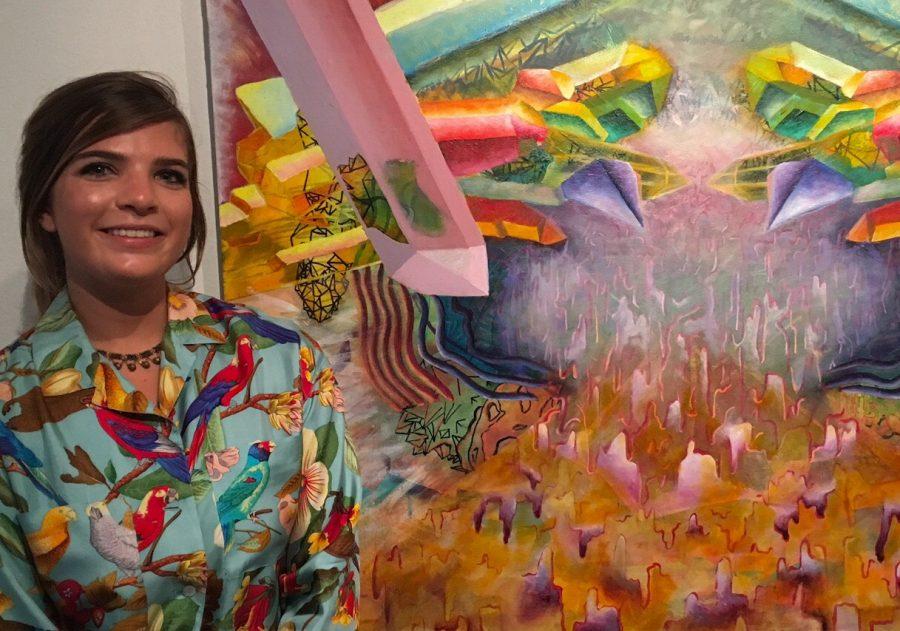 Brooke Einbender is a very social person. Many of her stories revolve around her time with her friends and her start-up company has allowed her to become business partners with two of them.  Einbender recently traveled to Charleston with friends and captured the energy of their adventures with disposable cameras.

She and her housemates have a collection of hats hanging on the wall in their home, which they often wear to parties or when they go out together. She loves to request the “Macarena”at date functions. But ask Einbender how she spends most of her free time and she’ll say painting in the studio, even on the weekends. The senior is proud of the balance she’s found.

“I think everyone needs a space that’s an escape from academics, from their social life,” Einbender said.

However, Einbender’s social nature is not limited to her time outside the studio.

“She is generous with her time, her creative intellect and unselfishly brings out the best in those around her,” said Page Laughlin, Einbender’s favorite professor. “Deeply attuned to the creative process, Brooke has the capacity to reach out to others and share her insights, make connections across disciplines and mediums, and do so with warmth and energy that excites and engages others.  This is evident in her impact in the studio, where her talent as an artist, her work ethic and her perceptive critique inspire her peers to work to their own best.”

The studio art major with minors in both Spanish and entrepreneurship and social enterprise was born in San Francisco, California, and graduated from high school in Greenville, North Carolina. She considers herself to be from Santa Fe, New Mexico, however, as this is where she lived for six formative years of her adolescence and a lot of her art inspiration comes from.

Einbender studied art in high school and has always considered it to be her anchor and passion. She chose Wake Forest after applying for and being awarded a presidential scholarship. Einbender also chose Wake Forest because she would be able to meet so many students from other places while staying close to her home and her mother. She intended to study business with a minor in art, but once on campus, she found that art was her passion and decided to make it the focus of her studies.

Now, Einbender has found the perfect way to bring the two interests together.

After graduation, she will be moving to New York City to find her direction in the art world and continue working on her start-up company, Higher Art Galleries, which is an online art gallery, community and platform for college students nationwide to sell original art and reproductions.

The idea was developed through a startup lab course in the entrepreneurship minor after Einbender interned with Turning Art, a company which creates prints for offices and the home, after her sophomore year.

“At Wake Forest, there’s kind of a disconnect between students in the arts and the rest of campus,” said Einbender.

She wanted to bridge that gap and create visibility for student artists while giving portions of sales back to art departments. Additionally, this year, Einbender was one of a select group of students on a buying trip for the Student Union Art Acquisitions Committee.  Every four years students study contemporary art and travel to New York City with a budget of $100,000 to purchase pieces for the decades-old collection. The group viewed the work of over 150 artists and acquired five works.

“It has such loaded content and creates a timeline,” said Einbender. “I’d love to have it and decorate my home with it.”