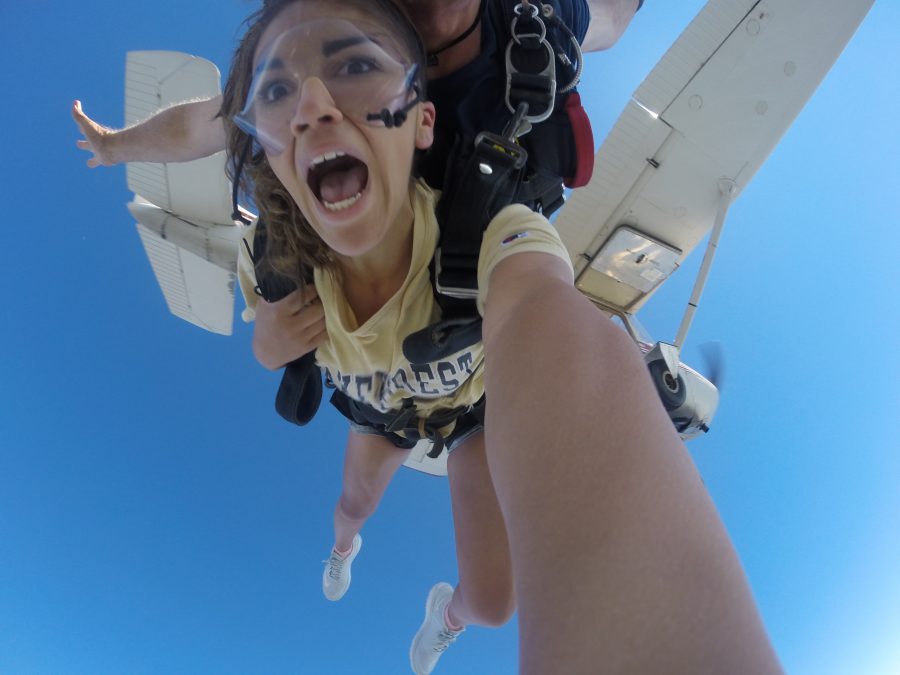 Don’t wait until you’re about to kick the bucket to start doing things on your bucket list.

Let me tell you, there is nothing scarier than letting a stranger push you out of a plane at 10,000 feet while you plummet to your death at 125 miles per hour. But don’t let that scare you.

Now I know what you’re thinking: “Why in the world would anyone decide to do that?”

Flash forward to a few months ago, and I’m sitting in my room thinking, “you know what would be cool? Jumping out of a plane!”

I immediately texted my boyfriend who is more afraid of heights than I am and asked if he wanted to go skydiving. He agreed, and on Aug. 6, when we were riding up in a rickety plane that was too small for the pilot, me, my boyfriend and the skydiving instructors Frank and Josh, we were having too many second thoughts to name.

Seriously, I was saying a prayer to every god I could think of and hoping I hadn’t done anything to anyone to make karma “get me.”

My boyfriend, Will, jumped first.

You know when you’re driving, and there is a bug in the car, so you let down your window and the bug flies out at a trillion miles per hour?

Yeah. That is what happened to Will. One minute he was there, and the next minute, he was gone. Then I was being waddled to the edge of the plane like a baby in one of those little baby harnesses strapped to the front of its mom.

Frank, my instructor, told me to put my foot on the step on under the wing of the plane. My legs looked like paper flying in the wind, and no matter what I did, my legs would not stay on that step. The next thing I knew, I was not in the plane anymore, and it became very real to me that I was falling to the earth.

Katy Perry was right. I felt like a paper bag drifting through the wind.

After the initial shock, however, I was amazed. I remember thinking, “There is a very real possibility that I could die right now. But I’m totally okay with it.”

After the freefall, when Frank pulled the parachute, everything went calm and silent. I finally caught my breath and tried to take in the view after knowing I had just jumped out of a plane.

When we finally landed, I knew immediately that I wanted to do it again. That is pretty much all that I remember, because I’m pretty sure that I was so afraid for my life that my mind blacked out for a while.

Judging from the videos and pictures, however, it was a really fun time.

A word of advice: if something is on your bucket list, or you’ve had even a sliver of a thought of wanting to do something crazy, do it. Don’t wait until you’re kicking the bucket to live your life to the fullest. Trust me, I’m the crazy girl who free fell at 10,000 feet from a moving airplane.