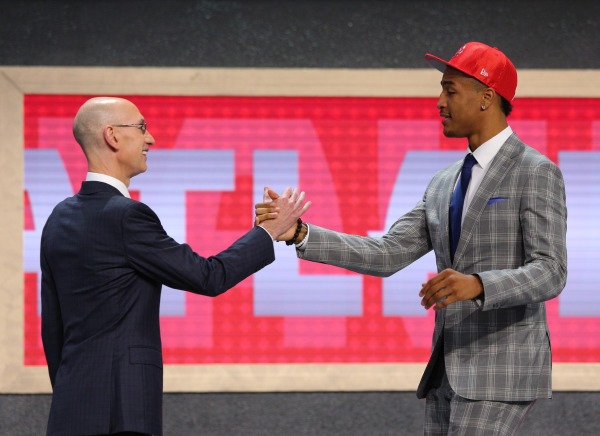 John Collins and Dinos Mitoglou both opted to forgo their respective junior and senior seasons and joined graduate transfer Austin Arians as the next three Demon Deacons to follow their dreams of playing professional basketball.

Collins was selected by the Atlanta Hawks with the No. 19 pick in the draft and Mitoglou signed with Panathinaikos, one of the best basketball clubs in all of Europe. Arians, who played for Wake Forest during the 2016-2017 season, signed a deal with BC Khimik Yuzhny, to continue his basketball career in Ukraine.

John Collins began his Wake Forest career under the radar — as only the third highest rated recruit in the 2015 Wake Forest recruiting class (Doral Moore and Bryant Crawford).

As a consensus three-star recruit out of West Palm Beach, FL, ranked as the 161st best national prospect by 247 Sports, many believed Collins possessed the potential to have a great Demon Deacon career. Few, however, could have fathomed that in just two seasons, the 6-10 forward would climb through the ranks to become a first round pick in the 2017 NBA Draft.

On Thursday, June 22, Collins did what was once considered unfathomable, as the Atlanta Hawks selected the Wake Forest big man with the 19th overall pick. Collins made the Demon Deacon faithful proud, and proved that coach Danny Manning is truly one of the nation’s best in developing young talent.

Manning joined Collins as a special guest at Thursday’s draft in the Barclays Center in Brooklyn, N.Y., and believes the newest addition of the Hawks will have a “great” career. Collins’ selection by the Hawks has a special Demon Deacon connection as part owner and Wake Forest alumnus Mit Shah (’91) was able to bring in Collins as the next component of a franchise that seeks to improve by identifying and developing young talent.

Collins dominated the ACC in the 2016-2017 season, receiving first team accolades, in addition to the recognition as the league’s Most Improved Player.

The sophomore led the Demon Deacons with 19.2 points and 9.8 rebounds per game and was the only Division I basketball player to average at least 19 points and nine rebounds.

Collins finished the year with 17 double-doubles and the highest player efficiency rating in the country — the second highest overall since 2009.

With his 19th overall selection, Collins becomes the 14th Wake Forest player taken in the first round, notably joining Muggsy Bogues, Rodney Rogers, Tim Duncan, Chris Paul, Jeff Teague and Al-Farouq Aminu as the next exceptional Demon Deacons to achieve such an accomplishment.