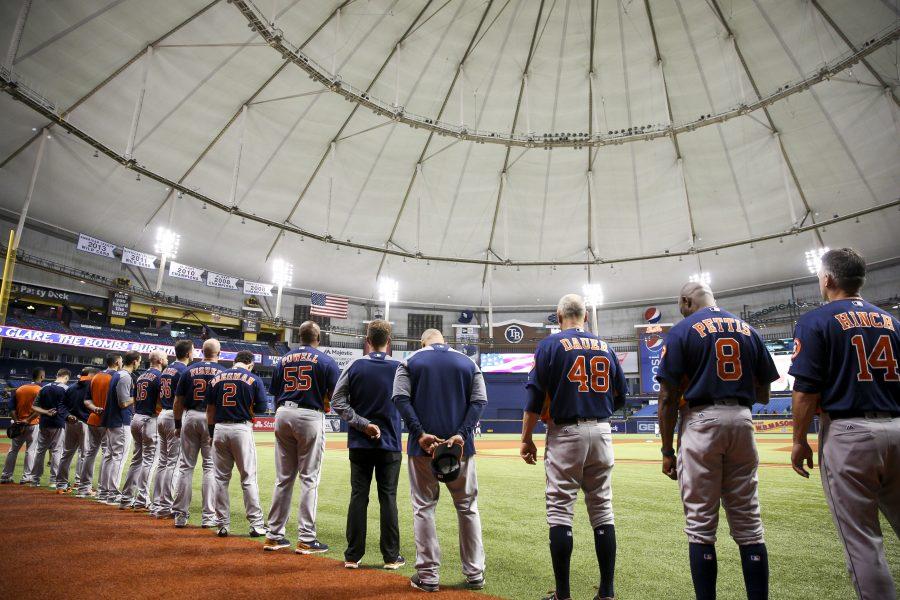 As baseball approaches its final month of the 2017 regular season, the postseason picture appears murkier than ever.

While the Dodgers, Astros and Nationals reign atop their divisions, the rest of the division leaders will have to hold tightly to their delicate leads, as the league currently abounds with pertinacious clubs seeking to shake-up playoff races in their favor.

In the American League, there are eight teams who either currently possess one of the two Wild Card slots or are within 3.5 games of a slot. Currently, the Yankees have home-field advantage in the Wild Card and would host the Minnesota Twins for the one-game playoff. The Twins will spend the remainder of the season fighting off the rest of the prospective Wild Card teams, including a surging Los Angeles Angels club.

When the Angels lost reigning AL MVP Mike Trout for several weeks to a thumb injury at the end of May, there was a sense that they would be buried in the postseason race during his absence. The Angels, however, were able to play .500 baseball despite the injury thanks to Cameron Maybin, who performed fairly well in his stopgap centerfield gig, and Andrelton Simmons, who has quietly posted the second-best bWAR in all of baseball. While Simmons’ shortstop defense has astounded fans for years, his value as a hitter was a question mark until this season, when he has raised his OPS to .787, 100 points higher than last season.

Mike Trout, despite missing over a month due to injury, has continued to prove why some consider him to be the greatest player of his generation. Trout owns a remarkable .318/.452/.646 slash line and has posted a career-high 187 wRC+.

Not to be outdone by Trout, Giancarlo Stanton has demonstrated that he might be the purest power hitter the league has seen since the steroid era. Stanton has hit 18 homers this month, which ties the big league record for home runs in August, and has totaled 51 this season. With a month left in the season, Roger Maris’s 1961 record of 61 home runs — a number untainted by steroid use — is well within reach, though Stanton would have to continue at his torrid pace to best Maris.

With the help of this offensive outburst from Stanton, The Marlins have been able to move within 5.5 games of an NL Wild Card slot. While their offense rivals that of any team, their pitching staff has posted a paltry 4.64 ERA.

Realistically, the Marlins could have solidified themselves as legitimate playoff contenders this season if not for the loss of Jose Fernandez, who had established himself as an ace before his death in September 2016. Fernandez posted a career ERA of 2.58, and his 2016 K/9 of 12.49 was the highest of career.

The absence of a frontline starting pitcher in Miami causes one to question the feasibility of any success in the postseason, let alone the sustained fortitude in September they would require to claim the second Wild Card slot.

There is no such absence in Boston, though, as the sheer dominance of southpaw Chris Sale has forced him not only into the Cy Young conversation but also the AL MVP conversation. There is no shortage of worthy candidates in the AL, but Chris Sale’s 2.77 ERA, 2.00 FIP, 0.91 WHIP, 12.82 K/9, and fWAR of 7.9 bolster his case to become just the second pitcher to win the AL MVP since 1986.

The other most enticing AL MVP candidate — now that Aaron Judge has regressed — is Houston Astros second baseman Jose Altuve. Altuve has slashed .355/.414/.563 in 2017, and his tremendous bat speed has allowed him to mash 20 homers in spite of his being the anti-Judge; he is listed at just 5’6, 165 pounds.

Houston, while not as productive as they were pre-All Star break, still have a stranglehold on the AL West. Unfortunately for the club and the citizens of Houston, Hurricane Harvey has flooded their city and home ballpark, forcing them to temporarily play their home games in St. Petersburg, Florida at Tropicana Field. Astros owner Jim Crane donated $4 million to relief efforts in Houston, and other athletes and owners have followed suit in support of the city and the daunting undertaking of its restoration.

Sometimes baseball proves to represent more than just a game, and Hurricane Harvey serves as evidence that the contrived concepts of rivalry and the clan-like, “us and them” mentality that pervades both sport and society alike can indeed be eliminated, if only for a short time, when one remembers the universal inclusion we all share in the inexorable community of humanity.