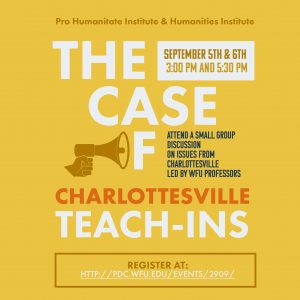 In response to the events of Charlottesville last month, the Pro Humanitate Institute (PHI) is partnering with the Humanities Institute to offer a “teach-in” for both students and staff.

The event is in part inspired by The Charlottesville syllabus, which was published by University of Virginia (UVA) graduate students following the attacks.

The “teach-in” will consist of small student groups meeting in rooms throughout Tribble on Sept. 5 and 6 to discuss topics related to Charlottesville. Faculty members from various departments across campus have volunteered to lead these groups, choosing texts for students to read beforehand to accompany and focus the discussions.

Students are encouraged to register for the teach-in online, and are able to choose groups whose faculty member and associated texts best align with their interests.

“The goal of the teach-in and the panel is to ensure our campus and community members have ample opportunities for meaningful engagement with the most crucial ideas, persons and events affecting our nation and our world,” said Melissa Harris-Perry, the executive director of the Pro Humanitate Institute. “Each faculty member leading a teach-in session has autonomy over their own session.”

Ron Von Burg, an assistant professor in the department of communication and director of graduate studies, is leading a group discussion centered around the implications of public memory and the role that monuments and memorials play.

He has selected two articles to accompany his group’s discussion: “Tools of Displacement” published by Slate Magazine, and “Moments of Rupture: Confederate Monuments and a Southern Town’s Search for its Identity” published by The Politic.

Barry Trachtenberg, a professor in the department of history, will be leading his own session on the existence of anti-semitism and the history of oppression against Jews in America.

“It’s my hope that the participants in the teach-ins will become part of a larger conversation about ways to combat the hatred and intolerance that is stemming from the far-right,” Trachtenberg said. ”In my session, we will be looking at the question as to why Jewish people are targeted by racist groups in the U.S. and examine ways in which Jews have historically responded to anti-semitism and oppression.”

Students in Trachtenberg’s session are encouraged to read Cheryl Greenberg’s essay “I’m not White — I’m Jewish”: The Racial Politics of American Jews” in preparation for both his teach-in discussion as well as Greenberg’s own visit to campus September 10.

“For me, these teach-ins emphasize the importance of critically and analytically engaging with the events in Charlottesville and with the growing visibility of white nationalist movements across the U.S.,” said Matthew Connor, a senior who is registered for the teach-in taught by Erica Still, an assistant professor of English. “I have attended several teach-ins at Wake Forest and I generally find them to be a useful step in advancing the dialogue around campus and national social climate.”

Some of the teach-in discussions will pull pieces from the Charlottesville syllabus, an online syllabus which offers academic resources to readers who want to learn more about topics such as Charlottesville’s history regarding white supremacy, the city’s current black business district and UVA’s association with the civil rights movement, to name a few.

The opening of the syllabus states, “The Charlottesville Syllabus seeks to explore the local historical and contemporary precedents for this gathering, to give it history and context, to denounce it and to amplify the voices of community members most affected by this “alt-right” occupation of space.”

“The syllabus really highlights the complex and multifaceted history and development of white supremacy, emphasizing the particular histories of Virginia and Charlottesville,” Connor said.

“It goes beyond the assumption that white nationalism and ‘the alt-right’ are new phenomena by very carefully exposing many of the facets of a racist society which fuel and support these explicit white nationalist groups, from the veneration of Confederate statues to gentrification to continued legacies of segregation and slavery. It ultimately helps us see a more complete picture of white nationalism as a powerful current spanning all of American history and not as some new fad among disgruntled white people.”

Individual sessions are capped at 15 people in order to better give students the space to have meaningful discussions with peers.

“My hope is that these teach-ins will illuminate the pervasiveness of racist and nationalist fervor in the U.S. and allow our campus community to engage more thoughtfully in activism and education that directly resists attempts to perpetuate and exacerbate exclusionary, marginalizing, and oppressive systems and movements,” Connor said.