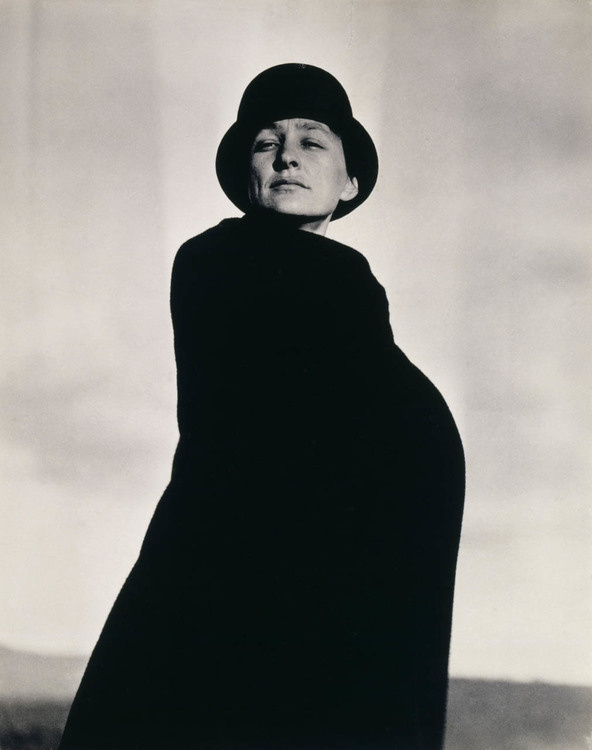 Georgia O’Keeffe, a pioneering modernist artist known for her early abstract paintings of larger-than-life flowers and animal bones, wanted every aspect of her life and person to reflect the meticulous sense of austerity and detail that she applied to her paintings.

Even as a young girl growing up in Wisconsin in the late 1800’s and early 1900’s, O’Keeffe rejected the somber Victorian society that she was born into and refused to conform to the world around her. If her sisters wore their hair braided, she said her hair could not be braided. Her strikingly modern aesthetic and effort to create a public image as an independent woman and artist are as apparent in her clothing and photographic portraits as they are in her paintings.

In a group photo of the Kappa Delta sorority at her boarding school in Virginia, O’Keeffe’s conspicuous style was already evident; she favored black and white and androgynous clothing. This philosophy influenced her art when she came into contact with the work of Arthur Wesley Dow, a painter who rejected the then-popular concept of art as a purely imitative medium and advocated for a more abstract approach. O’Keeffe first began to make herself known as a modernist when she taught art in Texas, first at a high school in Amarillo and later at a teachers’ college in Canyon. There, she raised eyebrows by throwing away textbooks that admonished artists to copy nature directly and urged her students to focus on beautiful and radical designs. She described this as focusing on “filling space in a beautiful way,” and she tried to apply that way of thinking to mundane activities like dressing or stamping an envelope.

In 1916, when O’Keeffe was just 29 years old, one of her friends showed one of her charcoal abstractions to Alfred Stieglitz, a renowned New York City photographer and expert in modern art. Stieglitz was impressed enough that he gave O’Keeffe her own one-person exhibition and began a lifelong series of photographic portraits of her. When the two began a romantic relationship by correspondence, Stieglitz convinced her to leave Texas, move to Manhattan with him and devote herself to painting.

The exhibition is organized in sections that run through her early years, largely spent in New York City and Lake George in upstate New York, to her later years, where she spent much time in and around Abiquiu, New Mexico. Thus, the progression of the paintings clearly shows how the colors that dominated O’Keeffe’s paintings changed based on the surrounding landscape. She tended to use much more exuberant shades of the colors in the terrain around her — for example, when she painted the mountains and lake at Lake George, greens, dark blues and browns dominated her color scheme. When the leaves changed in autumn, she made use of her favorite colors: red and yellow. While in Manhattan, where she painted what she saw out of her window, she used heavy grays, blues and blacks. Her art underwent an abrupt change when she moved permanently to New Mexico following Stieglitz’s death, where she drew heavily upon the bright blue skies, bleached-white animal bones, brown adobe, and terra-cotta stony cliffs that she could see from her studio in Abiquiu.

Indeed, when O’Keeffe started painting in the Southwest, the mystery of her paintings to more middle-of-the-road art critics in the East only increased, particularly in regards to the still-lifes she created featuring bleached animal bones that she picked up on walks into the desert. Some critics, many of whom had never visited the Southwest, interpreted her paintings of bones as meditations on death and the fleeting nature of life, but O’Keeffe disagreed. She believed that the bones captured the majesty of the high desert and remarked, “When I started painting the pelvis bones I was most interested in the holes in the bones — what I saw through them — particularly the blue from holding them up in the sun against the sky as one is apt to do when one seems to have more sky than earth in one’s world.”

In reference to the bones in “Pelvis with the Moon — New Mexico,” she said, “They were most wonderful against the Blue — that Blue that will always be there as it is now after all man’s destruction is finished.”

Around the time that O’Keeffe’s distinctive paintings of the New Mexico desertscape became more well-known, numerous renowned photographers such as Ansel Adams began to visit her at her home in Abiquiu to photograph her, and artist Andy Warhol created a screenprint of her in shimmery gold glitter. These images are mixed among her late-life paintings in the exhibition, and her androgynous appearance in the majority of them reinforces her rejection of traditional feminine identity.

She also denied any suggestions of sexual allusion in her paintings of flowers and resisted others’ attempts to label her as a feminist. Indeed, when feminist artist Judy Chicago asked her to participate in an anthology on female artists in the 1970s, she declined, stating that “One is a good painter or one is not, and sex is not the basis of this difference.” Therefore, the exhibition makes clear that while O’Keeffe experimented with gender-bending clothing and challenged society’s conventional expectations for women, it was not necessarily her intention to become a feminist icon.

In the end, O’Keeffe was reluctant to stand for anything other than herself.