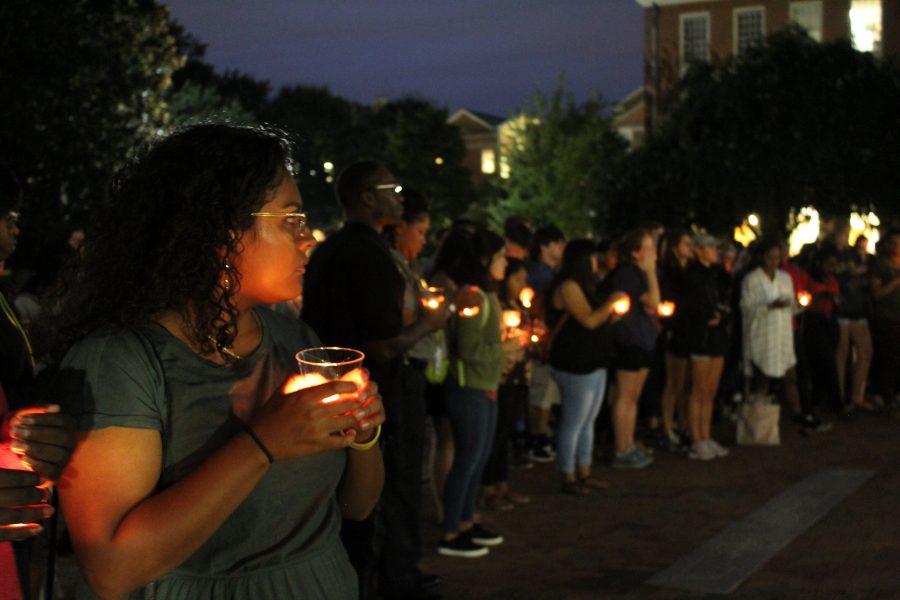 On Aug. 28, students, faculty and staff gathered for a candlelight vigil aiming to address and reflect upon the recent events that occurred in Charlottesville, VA.

Taking place on Manchester Plaza, it was planned by the university chaplain and intercultural center, and featured multiple speakers from the student body and faculty.

Earlier this month, violence erupted in Charlottesville, VA, during a “Unite the Right” rally that protested the removal of a statue of Confederate leader Robert E. Lee on the University of Virginia’s (UVA) campus. Specifically, during an anti-racism protest, James Alexander Fields Jr. slammed his car into the crowd. He killed 32-year-old Heather Heyer and injured 19 others.

Beginning with a statement from Interim Chief Diversity Officer José Villalba, the goal of the vigil was to pay respect to Heyer and outwardly condemn bigotry and hate on campus, as well as “promote unity” within the university’s community.

A native Virginian, junior Char Van Schenk, stood among the crowd as they listened to the speakers. If Van Schnenk had not been out of town during the anti-racism protests, they said that they would have been present during the attack.

“I actually know a lot of people who go to UVA and what kind of annoys me is that the friends I have that go to UVA are completely silent about this,” Van Schenk said. “So, I think that even though Wake Forest doesn’t have any connection to UVA, we all have a responsibility to speak up when we see white supremacy in our streets. Not just torch-wielding alt-righters but our professors, the people we work with, the people in our dorms, etc. It’s all a question to being visibly opposed to the threats towards our black brothers and sisters.”

Senior Rakin Nassar, another attendee, discussed the importance of the event for the university’s student body.

“Well considering that a lot of the participants of white supremacy at this rally were college students, it is important to feel like those people aren’t the only representation of what an educated college student is and it’s important to have this other representation at our college campus,” Nassar said. “Especially one like ours, which is a predominately white institution, it is particularly important to constantly represent ourselves as [against] white supremacy.”

University Chaplain Tim Auman concluded the event with a speech of similar theme, highlighting the need for students to embrace and try to better understand topics that make them uncomfortable. He ended the night by quoting Civil Rights Activist Vincent Harding’s song “We are Building up a New World.”

As a follow up to the vigil, the Pro Humanitate Institute (PHI) and Humanities Institute will be presenting a Charlottesville Teach-in on Sept. 5 and 6 at both 3 p.m. and 5:30 p.m. Continuously, the PHI will host a public panel on the topic, moderated by Professor Melissa Harris-Perry, at 6 p.m. in Wait Chapel on Sept. 7.