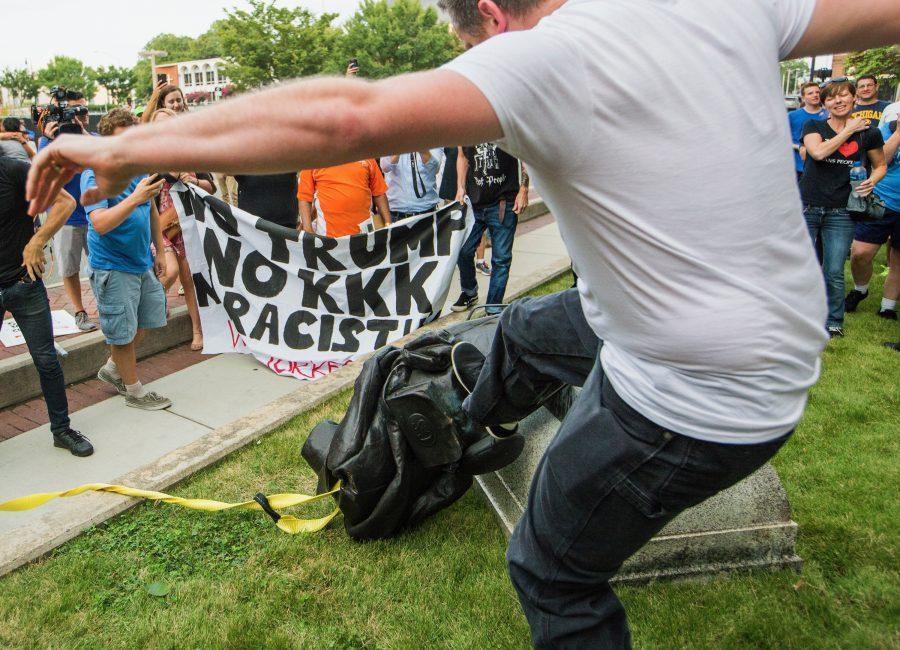 In the weeks since a white-nationalist rally protesting the removal of a statute of Confederate Gen. Robert E. Lee turned deadly, debates about the presence of Confederate symbols and monuments in public spaces have been revived.

Calls to remove statues of Confederate soldiers have spread from Virginia to North Carolina. For example, Duke removed its statue of Robert E. Lee from its chapel on Aug. 19. Hundreds of protesters also gathered at University of North Carolina-Chapel Hill on Aug. 26 to call for the removal of a Confederate statue on its campus.

However, because the UNC campus is public land, the statue is subject to North Carolina state law protecting monuments.

Known as “Silent Sam,” the statue was funded by the United Daughters of the Confederacy and alumni of the university to memorialize Confederate alumni who died in the Civil War and all students who enlisted in the Confederate army. A bronze image on the front depicts a student dropping books as he answers a call for duty and a relief on the base of the statue shows a woman, meant to represent North Carolina, advising students to fight even if it meant leaving their educations. The soldier is “silent” because he carries no cartridge box on his belt, so he cannot fire his gun. It was built in 1913 to commemorate the 50th anniversary of the beginning of the Civil War.

The statue has been a source of controversy for years, and the university has faced calls for it to be removed for a long time. On Aug. 17, Chapel Hill mayor Pat Hemminger asked UNC to remove it, citing that it “presents a clear and present danger to the students on campus and the community at large.” On the first day of classes at UNC, hundreds of protesters gathered around the statue, which was surrounded by police in riot gear, chanting slogans such as “tear it down.” Two individuals were arrested by university police and a third was arrested by Chapel Hill police. Counter-protesters carrying Confederate flags were vastly outnumbered by those in support of removing the monument.

Kiana Cole, a student at UNC and director of investigations for the UNC-Chapel Hill campus newspaper, the Daily Tar Heel, attended and live-tweeted the protest. “The most shocking part of the protest was how quickly protesters switched messages,” she said. “At one point I was standing near a guy wearing a black bandana sort of like a face mask, and police approached him and escorted him away…As soon as police began to walk away with him, the crowd was really outraged, and the mission almost instantaneously switched from chants like ‘hey hey, ho ho, Silent Sam has got to go,’ and became ‘cops and Klan go hand in hand.’” She said that a large number of protesters followed the police, and “a good portion of the night became about this anti-cop narrative.”

North Carolina Gov. Roy Cooper has penned a letter to UNC System President Margaret Spellings advising the university to remove the statue if leaders “believe there is a real risk to public safety.” However, the UNC Board of Trustees still said it lacks the authority to remove it due to the Pat McCrory-era Heritage Protection Act of 2015. The state law prevents removing, relocating or altering monuments or markers on public property without permission from the North Carolina Historical Commission. Thus, unless a tenable loophole in the law is identified, the president of UNC, unlike the president of Duke, is unable to instruct the monument to be removed. According to the Daily Tar Heel, the university is unwilling to risk legal consequence.

Harry Watson, a UNC history professor specializing in the Antebellum South, told the Daily Tar Heel that maintaining Confederate monuments in public spaces damages the accuracy of Civil War history that is taught because it erases African-Americans from representation. “I want us to remember a story that’s both true and full,” he said. “And the monuments are not teaching that story. If the law is repealed, it will create the opportunity for us all to teach in public a much fuller and more accurate account of what the nation experienced.”