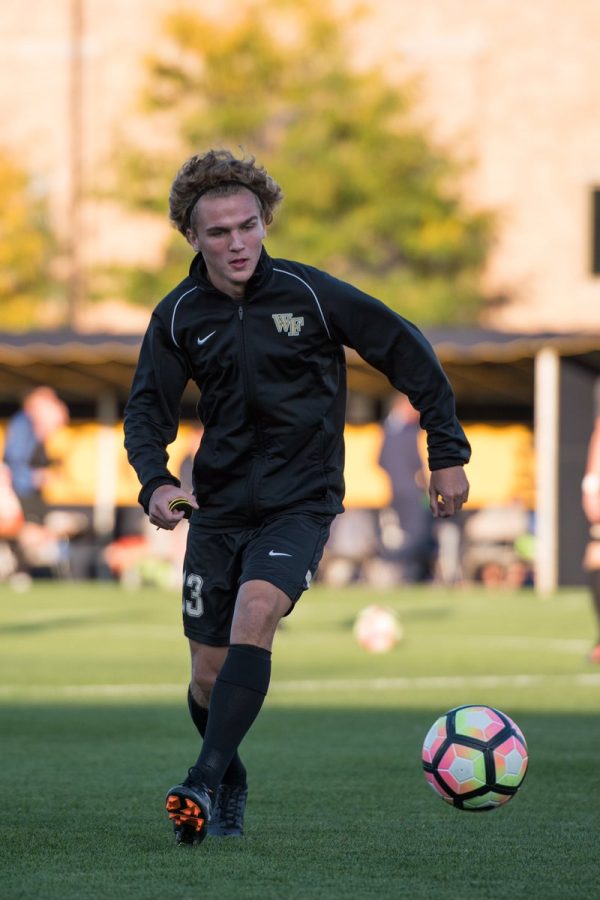 Thomas Menke is a sophomore midfielder who is gaining traction and building a reputation on the Wake Forest men’s soccer team.

As a sophomore, he has played in every game this season and is working to become one of the teams biggest leaders at the midfielder position. Menke hopes to help contribute to another ACC tournament win, and maybe even a national title.

What are your thoughts on the Aug. 5 game against Georgia State?

Sitting in the locker room for an hour was tough. Tactics-wise we expected them to come out and play but they surprised us in the first 10 minutes. I thought we did well with our shape, but we just kind of lost our focus in the first five minutes of extra time.

How did it feel to score your first goal last week against St. Louis?

It was a great feeling. All of the work I’ve been putting in since July is finally paying off. I just hope it doesn’t end at one, and things keep improving.

How is it different being a sophomore on the team as opposed to a freshman?

I guess it really just lightens the pressure that is put on you. As a freshman, you have no idea what it’s going to be like. I mean, you have an idea, but not until you get there. Sophomore year, you know what’s expected of you, what the coaches expect and how hard you have to work.

What are some of the biggest strengths and weaknesses of the team?

One of our biggest strengths is our depth. We have very talented kids, very hard workers coming off the bench. Our team work ethic is unbelievable. Everyone is putting in 150 percent every day. Some weaknesses are getting caught in transition because our style of soccer is to pin teams in and play in their half. Some of the goals this season have come from the other team picking us off and counter-attacking.

What are the team’s goals for the season?

It’s the same as they were last year. Get through the regular season, and after that, win the ACC tournament. Then advance to the college cup and hopefully bring home a national championship.

What are your personal goals for the season?

To get on the field more than I have been. Last year I went from playing in three games to tripling my minutes and playing in more than three games just so far. Also just continuing to perform, score some goals and help our team win more games.

Who is your favorite player to watch?

It would definitely have to be Messi. Just his style of soccer is so attractive, and his unpredictability is something that I try to replicate. He is also probalbly one of the greatest players to ever live.

What do you enjoy doing off the field?

Off the field I like spending time with my friends and going to the gym. Last spring the gym was a big part of my life and I believe it really helped me build my character on and off the field.