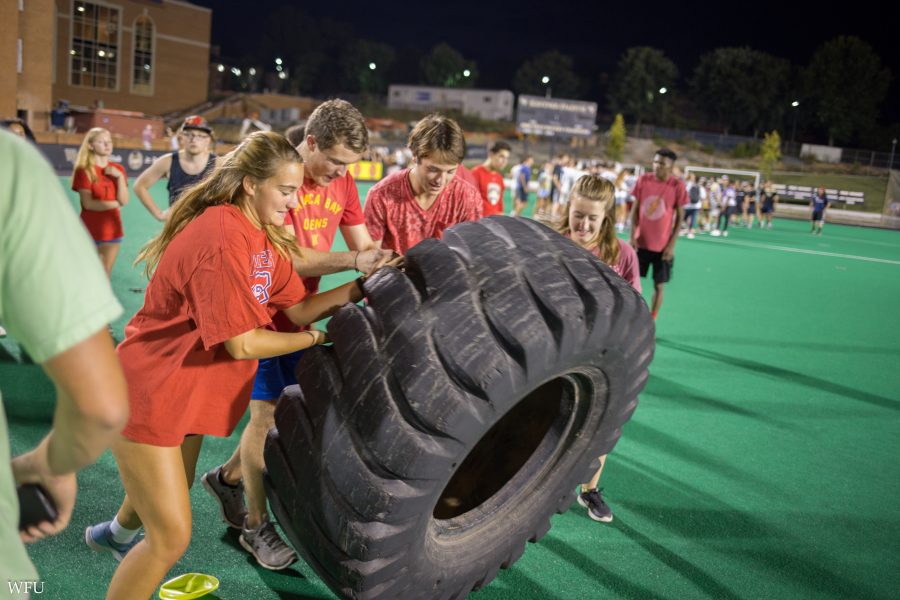 Beginning with Move-In on Aug. 23 and ending with a night of de-stressing before class on Aug. 27, first-year students were welcomed onto campus with a variety of Orientation activities.

During New Deac Week, students participated in events such as the Making of a Demon Deacon, Taste of Winston-Salem and Pros vs. Joes.

The first morning on campus, Aug. 24, first-year students and their families gathered together on Hearn Plaza for brunch and the Making of a Demon Deacon event. Taking their seat on yellow picnic blankets, attendees served themselves breakfasts of biscuits, bagels, fruit and coffee. Following the food, the students gathered near the front of Reynolda Hall for the ceremony.

The program included a musical performance, a welcoming statement from Student Government President Spencer Schiller and a speech made by Provost Rogan Kersh. To conclude the morning event, first-year students were pinned and sang the alma mater together for the first time.

Junior Morgan Briggs helped to organize many of the Orientation events, serving as a President’s Aide for the New Student Convocation and running the school’s snapchat during certain activities.

“The importance of all of the orientation events is to remind students what it means to be a member of the Wake Forest community. The New Student Convocation adds the first-years to a legacy of Wake Forest students, passing along with it values of honesty and hard work,” Briggs said.

Before the men’s soccer team played the first game of the season, freshman gathered outside of the Spry Stadium on Aug. 24 for the Taste of Winston-Salem event. Food trucks and tables representing everything from local spots such as Brynn’s Frozen Yogurt and Krankies Coffee to chains like Panera Bread gave out samples of their cuisine.

“[Taste of Winston-Salem] was a great way to meet people and get to know what eating off-campus would be like,” freshman Rose Savocchi said.

Pros vs. Joes, a campus tradition, was held on Aug. 26. During the two-hour competition, two halls of different genders are paired together to compete in events ranging from a soccer shoot-out to a shoe stacking competition. The winning group, decided by the amount of points received in each round, included the C-Wing in Collin’s first floor and the basement of Babcock.

A member of the winning team, freshman Maddie Porter’s favorite  stop was the Frisbee toss.

“I wasn’t particularly good at [the Frisbee toss], but it was fun to practice that and I also liked rolling the tire because everyone had to work together,” Porter said. “It was a great way to meet more people. We were shocked when we won, and it definitely brought us all together.”

The winning team received t-shirts and will participate in a celebratory dinner with President Nathan Hatch.