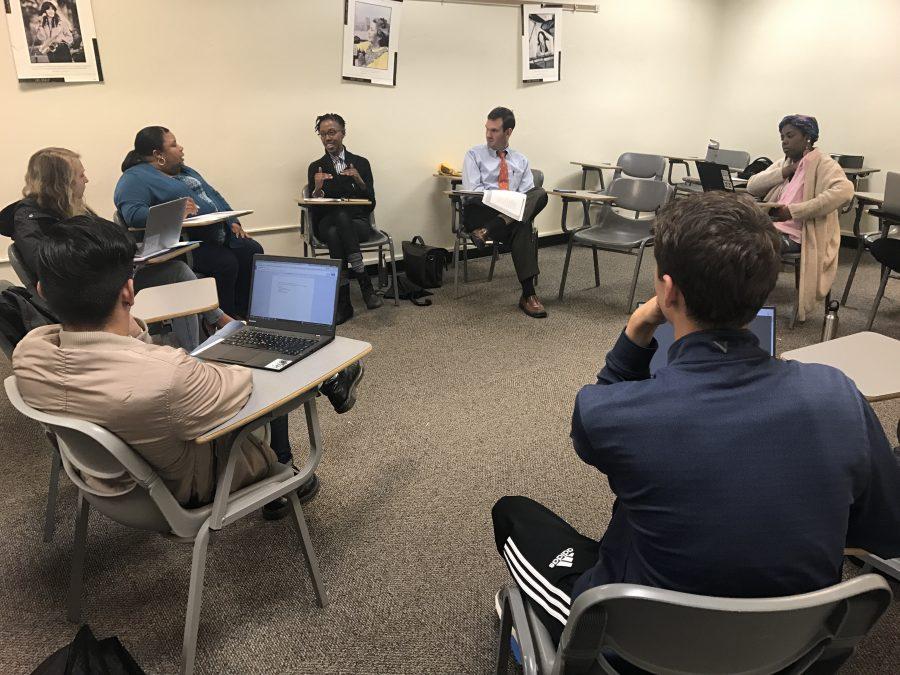 The Pro Humanitate Institute partnered with the Humanities Institute to offer “teach-in” sessions facilitating focused discussions in response to the events surrounding the white nationalist and alt-right rally in Charlottesville last month on Sept. 5 and 6.

These took place before “The Case of Charlottesville: Why Charlottesville Happened and What It Means for the Rest of Us,” a panel discussion on race, politics and the South moderated by Melissa Harris-Perry on Sept. 7 at 6 p.m. in Wait Chapel.

Ten faculty members from across campus — Derek Hicks from the School of Divinity, Christopher Brown, Dean Franco and Erica Still from the department of English, Simone Caron and Barry Trachtenberg from the department of history, Barbara Lentz from the School of Law and Melissa Harris-Perry and Michael Pisapia from the department of politics and international affairs — volunteered to select texts and lead separate small groups of up to 15 students and faculty and staff members. Each instructor had autonomy over his or her own session and the assigned readings were available online in advance through Google Drive folders, which allowed participants to choose the session that best aligned with their interests and schedule.

In Lentz’s session on Tuesday, Sept. 5, for example, the emphasis was on the legality of the Charlottesville white nationalist rally. The group, consisting of Lentz, junior Mella Tesfazgi and Kelly Larrimore, office manager and program administrator for the Pro Humanitate Institute, discussed the first and second amendment and why U.S. District Judge Glen Conrad ruled to allow alt-right group “Unite the Right” to assemble in Emancipation Park. The group also discussed how cities can proactively put security measures in place to facilitate safe, peaceful assembly.

Still’s group of nine participants, including Associate Dean of Students Matt Clifford and Kaylan Baxter, director of planning and assessment for the Pro Humanitate Institute as well as two first year students, two juniors and three seniors, focused on the idea of memory and history and how to facilitate dialogues across difference on campus.

“When I saw the invitation to participate in this event, I thought, this is exactly the kind of thing I’m invested in doing,” Still said. “The assumption is that because we’re on a college campus, we all get that this is a problem, so we move on.”

The teach-ins were in-part inspired by the electronic Charlottesville syllabus, a selection of academic resources on topics such as Charlottesville’s history regarding white supremacy, the city’s current black business district and UVA’s association with the civil rights movement, which was published by University of Virginia graduate students following the attacks.

Many of the students who attended the teach-ins were encouraged to do so by their professors. Tesfazgi believes this is why her group was small.

“I wish it was advertised more,” Tesfazgi said. “I feel like not many people knew about it. The only reason I knew about it was because of my professor, and not everyone is in classes where they’re encouraged to go. … People need to know about it. I do think it’s beneficial to have these conversations and deconstruct what went wrong to keep this from happening again. We can take Charlottesville as a lesson.”

Still reiterated this and much of her group’s discussion explored how to navigate discussions with peers and how to proceed with change.

“Progress is possible, and we have a whole history to suggest that it is probable, but it’s not inevitable,” Still said.

Today’s panel discussion will continue the dialogue opened by the teach-in sessions and will be among the first campus-wide events in this year’s “Rethinking Community” series. Harris-Perry will moderate the discussion.

There will be another series of small group discussions Thursday from 7:30 – 8:30 p.m., but these are in response to the panel dialogue and are both facilitated by and available to students only.