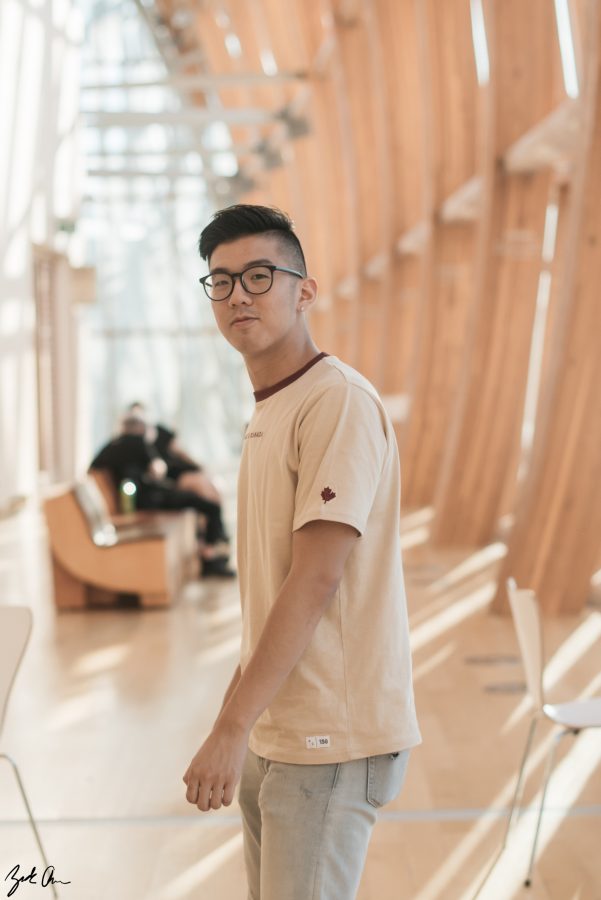 Zack Chan, an accounting major and studio art minor, has photographed a lot of Wake Forest and the community.

The senior from Milton, NJ helps manage and take photographs for a tumblr called “The Forest Folk.” Most recently, he did a photo story for Wake Forest called “Adhesive Anthropology” in which Chan photographed students’ and their laptop stickers.

When did you get started with photography? What inspiration do you draw from?

I started photography when I was in high school. One of my friends had a camera and I was like, “Oh, this is so cool that you’re taking pictures.” So I bought one myself.

My driving inspiration for what I do here is from Brandon Stanton, of Humans of New York — a blog that showcases co-inhabitants of the New York City metropolitan area. I tried that my final year of high school, and kicked off a really fun project for senior year. It brought the community of my high school closer together, so I saw the idea of art and impact. I think that project really helped me figure out purpose in art and I really wanted it to be something like that here.

I met this guy named Sean Wilkinson, who was the TA in my Intro to Photography class freshman year. He saw my pictures, and said, “Do you want to help me out with Forest Folk?” That really opened up my network to all the different projects. He actually works for the design team right now, and they help with Wake Will projects and a lot of the outreach projects. He introduced me to the “Adhesive Anthropology” project.

I love drawing from social media bloggers because they love to stay active on staying creative. George Bryne, Mark Nguyen, Quyen Mike, Brian Tampol and Justin Chung are some of the photographers I love.

Other than photography, are you interested in other forms of visual media or art?

I would say social media, utilizing studio photography in a way to showcase products or people, models and fashion. I’m very into fashion photography. I do some side projects for film and video.

You’re an accounting major. How does your photography fit into that?

It doesn’t really. I always had a thing for numbers back when I started college. When I entered the art department, I found the resources to be very helpful and accessible and the teachers were very insightful.

The art department was very adamant on teaching foundation as well as critiquing and surrounding myself with inspiration.

I utilize those same principles of foundation, reflection and inspiration to accounting.

How did you come up with “Adhesive Anthropology?”

I had done the idea of adhesive anthropology before, but with fashion. My style of the photography is more run and gun where you go around campus and if you see someone, if you see something interesting about how they compose themselves with their outfit, like if they’re wearing something super nice or their hair is done really well, I stop them and I take a picture and I talk to them for a little bit. Someone in the design team at Wake Forest saw that strategy and that it could be transposed with the idea of stickers.

A lot of stickers are put around campus through clubs and events. Stickers you put on something you own and that can be more than just personal. There can be more conversation behind that. They thought the way I talk to people and take pictures of people could be a way of collecting 20-30 people and their stories with their stickers.

How did you pick which specific sticker to ask people to explain?

My purpose is breadth versus depth when it comes to choosing people. My methodology was really just taking a lap around campus, going to science buildings, the library, Benson, to Manchester to the business school. I didn’t really nit-pick on which stickers. There’s so many out there. Not everyone will pick the same ones and some will even buy stuff online. Stickers are a part of them, that represents who they are, that’s even more personal, that can tell a story.

Do you have any important stickers on your laptop/water bottle/etc.?

I have stuff from President’s Ball, Springfest, Momentum Crew — the hip hop crew on campus — a human rights sticker. I did a project freshman year, Project Deacon, where people tried to redesign the Deacon, so I have a sticker for that. I met someone from Wake Radio. They told me how they designed their own stickers so she gave me some. A lot of it was really just a collection of experiences, people I met, or things I went to.

You also run a tumblr called The Forest Folk that features photographs of Wake Forest students. What is the purpose behind those photos?

It was started by two soccer players who were very interested in fashion photography. Their motto was “dare to be different.” At the time, there were a lot of homogenous communities at Wake  Forest, and they were trying to celebrate the non-norm.

I think now, like what a perfect time to be like looking at diversity at Wake Forest. We’re in that phase of changing diversity every year. The Forest Folk is not just a commentary on that, but a celebration of the people we have on campus — who dare to try to stand out and not just stand in groups.

Is there any specific experience that you had during college that you wish you could’ve captured in a picture? What would a photograph encapturing your college experience look like?

Project Deacon was done with seniors and art students. That project was very secretive and that’s something I wish I could capture — the experience of going through that, being together and becoming a movement. That’s very powerful and there’s very few times during the year where you get to do that, especially secretively.

Because I do a lot for The Forest Folk, the outreach team takes a lot of our photos and uses them for admissions books and stuff. I’ve helped people do photoshoots for clubs and stuff for WFU Style and the Old Gold & Black a little bit. I photographed the last President’s Ball, homecoming and a black celebration gala.

I do a lot of event coverage, but I’m hoping that this year I can do something that looks more like a conceptual project than just photographing experience.

Because of The Forest Folk, I’ve met a lot of people along the way who are interested in social media and art. We’ve ended up collaborating on some things together. We’ve also done like smaller photoshoots around campus. I’m the type of guy who loves doing quick, last minute, like “hey what are you doing in the next half hour, want to shoot on the quad?” projects.

Are there any cool photo stories/projects that you have planned for this coming year that we can look out for?

I’m doing a big rebrand on The Forest Folk — more social media presence and more brand presence around campus because it pretty much died last year. Then I just I want to do collages together with different types of people. So I think once a month we’re going to do a photo inviting students, faculty members and bring them into one photo.

What do you plan on doing after graduation and how will photography fit into that plan?

I’m starting my masters program here in the fall for accounting. I’ll also be doing a lot of, hopefully, side photography projects with some offices in downtown Winston-Salem, because a couple people down there have seen my work.

Eventually, maybe in the next five years, I’ll be somewhere in a big city and just be photographing my friends and fashion bloggers. I love capturing people’s idea of displaying textures and art in different compositions of themselves. I find that so beautiful and want to be a documenter of that and people’s lives.