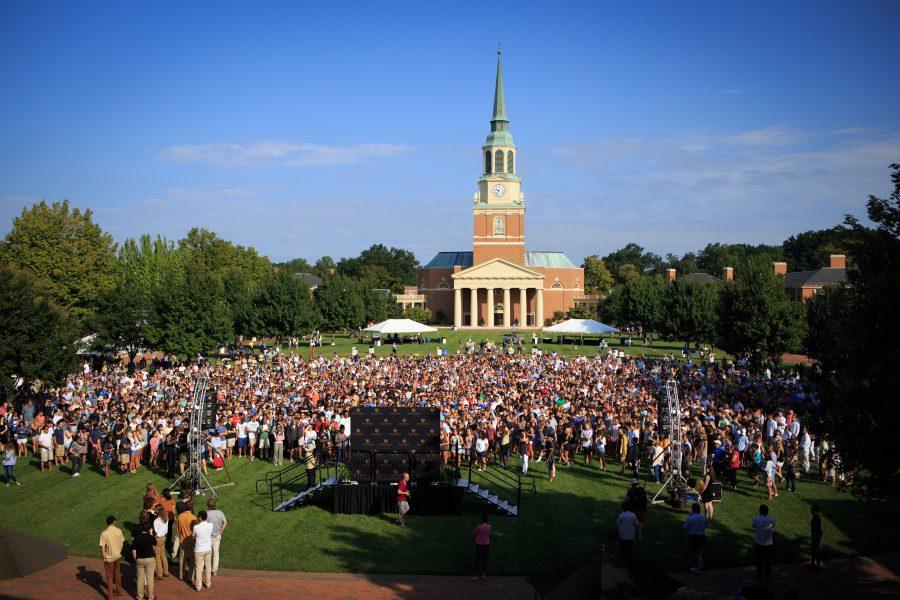 Colleges and universities in the U.S. have always had to address the challenge of sending graduates into a global and diverse society.

Yet, especially in the wake of the political developments of the past year and the widespread polarization that has brewed for years, deep structural change is afoot in the campus, national and global communities.

According to Provost Rogan Kersh, part of the university’s mission is to create a campus space that is maximally inclusive and welcoming. But this charge is complicated by the fact that the world that students enter after leaving Wake Forest is more polarized, diverse and global than it has been before. Millennials rely more and more on virtual and online communication, which is a significant departure from the way that communities used to interact in decades past.

“It’s a tough time on university and college campuses,” Kersh said. “There are a lot of tensions, a lot of fault lines, that keep bursting into flames on one campus or another at regular intervals. I’d love for us to be a more positive story about how people fully living into their identities, affinity groups, ideological backgrounds and so on at the same time can build a gorgeous array of bridges that connect us in a time of polarization and division.”

These new challenges were the driving forces behind the university’s new “Rethinking Community” initiative. Over the course of the 2017-2018 school year, a series of conferences, dialogues, speakers, performances and events will explore the “polarized, diverse, virtual and global” nature of life in the second decade of the 21st century. Through this initiative, by rethinking what it means to live in a community in a basic sense, the campus will examine the critical need to grow and strengthen together.

Some of the “Rethinking Community” efforts are still in early stages, but many of its events and opportunities will be intended to allow students, faculty and staff to connect with each other to discuss topics that they are passionate about — regardless of whether or not they agree — in a low-stakes, high-return environment.

“We have long taken for granted in the U.S. that we’re all on the same page, more or less,” Kersh said. “And yet now we’re the most polarized, in many respects, that we’ve ever been as a country. We also in the United States have historically taken for granted that we’re in a community with people who are more or less like us in terms of background and experience. Instead, today are communities are far more diverse — including here at Wake Forest, beyond our gates and across the country. We also too often take for granted that in the U.S. that the community is American one. It is a global community.”

Kersh added that one of the initiative’s goals is to help bridges flourish across different communities right on campus, not just in the world beyond Wake Forest. Academic communities at Wake Forest are deeply disciplinary and often don’t have a lot to do with each other, and there is little connection between the professional schools and the undergraduate college. There are divisions, he said, between those who work as staff and those who work as faculty and between faculty and staff and students. Other dividing lines include those between Greek and non-Greek students, students from across the socioeconomic spectrum and legacy versus first-generation students. “We have, like America itself, many subcommunities that often exist, at best, in a spirit of mutual indifference,” he said. “We’d like to build more bridges…We recognize the vital importance of bonding people because they have intellectual affinity, national origin affinity, racial, ethnic, gender, sexual preference — all the different ways people find affinity as a part of their identity.”

The advent of “Rethinking Community” was inspired by two previously established Wake Forest practices: themed years and rethinking old ideas. For several years in the late 1990s and early 2000s, the university organized speakers and events in recognition of a central idea; one example was the “Year of Unity and Hope” in the 2001-2002 school year following the terrorist attacks of September 11. Secondly, “Rethinking Community” is loosely modeled in the image of two previous efforts, “Rethinking Admissions” and “Rethinking Success.” “Rethinking Admissions” resulted in Wake Forest’s test-optional policy, for which it was a leader among its peer institutions. “Rethinking Success,” in turn, led to the establishment of the Office of Personal and Career Development. Because both “Rethinking Admissions” and “Rethinking Success” led to high visibility for Wake Forest among peer schools, Kersh is hopeful that “Rethinking Community” will likewise make the university a leader among its peers. “I hope that [this] gets noticed,” said Kersh. “And other universities, and for that matter, other communities recognize that this is a place they might study, make sense of, learn something from. Seventeen-year-olds might think, oh, I’d like to go to a place that’s like that.”

“I’d love to imagine this extraordinary group of student, faculty, staff, entrepreneurs, creative thinkers, performers will come up with a set of signature Wake Forest-style results of rethinking community,” he said. “Either programs or practices or affirmations of things we do already that become more visible. I love the notion that we can become a kind of exemplar of more intentionally living together in ways that lift all of us up.”