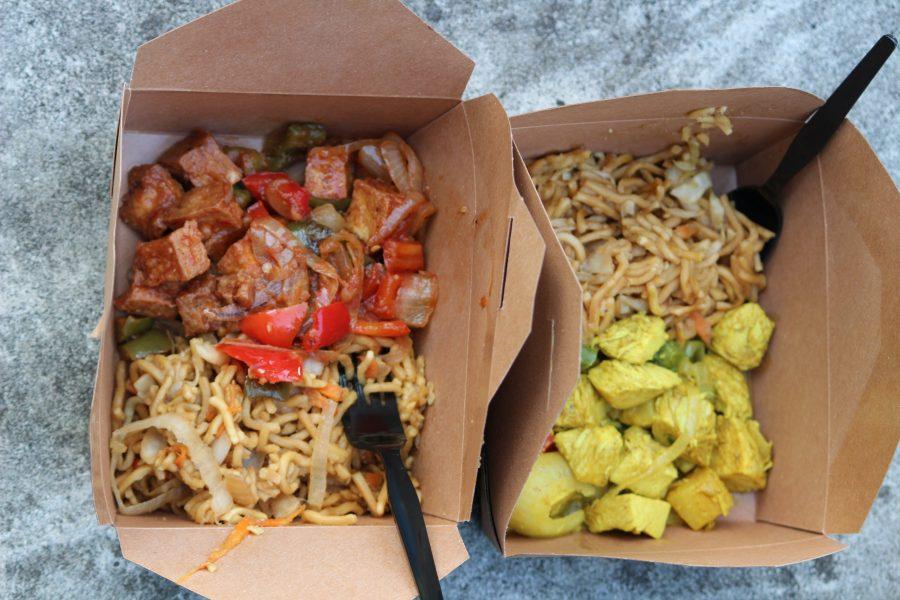 Over the summer, when most students had left campus, Wake Forest underwent a metamorphosis.

When students came back in the fall, they found newly renovated residences like Davis and Huffman, upgrades in the Pit and a new station in the Benson food court.

The new station in Benson is Take Two, which formerly served Boar’s Head deli sandwiches and items from the grill. Now, Take Two serves what has been labeled as “Asian American Fusion.”

For an Old Gold swipe, a student has two options: a burger, fries and fountain soda or one side dish, one entrée dish and a fountain soda. Otherwise, students can order single items or a combination. A student can get up to two entrées and two sides at once. A single side costs $1.49 and a single entrée costs $4.99.

Sophomore Yuhan He was the international student who oversaw the initiative and petitioned to have more Asian food on campus. Although she was the sole person to negotiate with Aramark, He received help and support from Global Food Committee and the Center for Global Programs and Studies. In order for this Asian fusion station to become a reality, He translated over 7,000 words worth of recipes last semester. Although the recipes are authentic, the ingredients may not always be. Aramark is contracted to buy only from specific vendors and cannot outsource other ingredients.

Many students have questioned the authenticity of the mass-produced Asian food. One student commented on the chow mein, stating that the chow mein tastes vaguely like soggy Goldfish crackers. Another said how unidentifiable the food looked when thrown together.

Sophomore Maggie Grundy said the food did not taste authentic, but that it has improved since Take Two began serving Asian fusion.

“Obviously it’s Americanized. I think it’s gotten better since they opened. The first time I had it, the chicken was breaded; it was like they had used Chick-fil-A nuggets,” Grundy said.

An international student from China, who wishes to remain anonymous, discussed the difficulty it takes to cook authentic Chinese food.

“Chinese food is actually super hard to cook. It takes more techniques and practice. The Chinese food provided in Benson use relatively simple recipes, but it still takes a lot of practice to make them as well. Personally, I think the texture of the food is not very on point. The taste is not very authentic, but I can still see that the cooks’ and Yuhan’s effort through the food, and I admire them for that,” said the student.

Other students have applauded the purpose that the Asian fusion station serves in increasing representation of minority groups on campus.

“I appreciate the gesture for Asian and Asian-American students. It’s heading in the right direction, but it was poor execution,” said sophomore James Lee.

Some students have expressed disappointment that the Boar’s Head station was replaced.

“I think it’s unfortunate [that Boar’s Head is gone] because it was a good sandwich place, a real staple on campus,” said sophomore Jillian Snyder.

Luckily for those students who miss Boar’s Head, something similar is in the works through Aramark.

“Boar’s Head [has not been totally] removed. We are incorporating it in the new Forest Greens, which will be located in the old Wells Fargo bank. This area will feature Forest Greens and an exciting new deli option. We are currently in negotiation with Village Juice to possibly feature a smoothie solution,” said Vandermeersch.

The updates to the food offerings on campus are not over yet. In addition to the Asian fusion station in Benson, He and Aramark are also working to update the Asian station in the Pit. Chefs in the Pit are still in the process of being trained to cook more authentic Asian foods.