Tailgating for Dummies: A guide 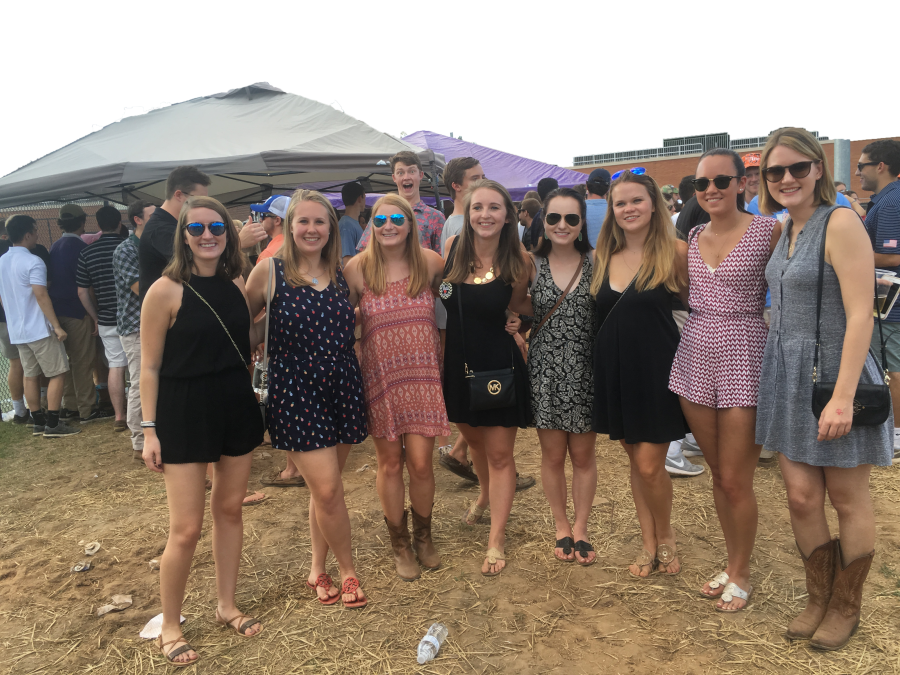 Summertime is over, classes have begun and tailgating season is in full swing.

If you’re a freshman trying to look less “freshman,” a sophomore who has just now decided to participate in Wake Forest sports or a junior who has yet to figure out the socially constructed “rules” of Wake Forest tailgates, get ready for tips, tricks and rules to avoid being “that guy” or “that gal” at the next tailgate.

Though Wake Forest students may not be able to name a single football player on the team, and they rarely even know what team they are playing for the upcoming game, tailgating season is a holiday in the South that must be celebrated.

Anyone who has ever seen a Wake Forest tailgate has probably noticed the unofficial dress code that all students seem to follow. Girls typically sport a black dress or romper, opting for a fancier outfit than typical nights out. Unlike any other social event at Wake Forest, chucks are optional (and not even strongly recommended). Tailgates are Wake Forest students’ one opportunity to show their peers that they own more shoes than just a colorful pair of converse that desperately need to be cleaned. Despite the lack of chucks, girls often sport sorority buttons as a Greek life tradition.

Boys, on the other hand, vary more in their style. Some boys choose to wear a button down or a polo, while others roll out of bed and throw on a jersey. Regardless, all students seem to follow the same “look” when dressing for a tailgate.

Once dressed in the aforementioned outfits, students can be seen swarming large buses en route to the game. Buses typically start a few hours before kickoff in order to allot the proper amount of “tailgating time.” Popular games, such as Homecoming, turn into a mad dash for the door. Seventy people all trying to fit through the tiny, rectangular door of a bus that holds 40 seats brings out the worst in people.

Emotions are high, tensions are thick and nothing comes between a student and their spot to the tailgate. Inevitably, a large portion of the students will have to wait for the next ride and endure the madness ensued by eager crowds all over again.

Once at the tailgate, students rush for the various tents scattered outside the stadium. Different organizations, clubs and fraternities have their own tents with various types of food, beer and music. Here is when the strategy comes into play. Beverages (for students who are 21+) are most easily accessible at the tents towards the back. Students who stop at the first tent they see make the common (but fatal) mistake of dwindling away their socializing time for a cheap and watered down beer.

But alter your plan of attack according to your current mood. If you’re in the mood to socialize with your friends, head to your favorite organization’s tent.

Though this can make for a fun game day, tailgates can also be the perfect place to rehash those friendships with the people you only see once every few weeks. Practically everyone comes to big games like Homecoming, so this is an opportunity to strengthen your friendships outside of your immediate social circle. Try venturing to an organization you do not typically go to and rekindle old friendships, or make new ones. Tailgates are the best social setting to meet new people. If the previous week is taking its toll on you and hours of extensive socializing sounds almost as painful as your last accounting exam, let go of your stress and dance.

Location is vital for this game plan, as you must quickly rush to the fraternity with the best music (usually the fraternities playing “Mr. Brightside” or any classic early 2000s song). Tailgates can provide you with all the same fun and dancing of a fraternity basement, but without all the claustrophobia and sweat involved.

Finally, the swarm of yellow vests marked as police will emerge from the abysses, attempting to scare students into the game. Try to at least walk into the stadium if you want to pretend like you care about Wake Forest football even the slightest bit. If you’ve made it past first quarter, you are considered a dedicated fan. For those of us who aren’t as committed to the game, head back to campus after watching a few plays and participating in a couple cheers.

When you get back to campus, end your perfect afternoon at Zick’s. The line itself will probably take at least 20-30 minutes, as many students swarm the nearest restaurant on campus. Believe it or not, the Zick’s line can also be an opportunity to socialize. The greasiness of Zick’s pizza is the only exceptional way to end a tailgate.

Wake Forest tailgates are unlike any other school. They offer all the excitement of a state school, with the familiarity and community of a smaller school. Be sure to follow these tips so you can properly blend in with the hoards of students who have it all figured out.

Regardless of your preference for sports, beer or music, tailgates are one of the best parts about the college experience. Follow these tips, and don’t be “that guy” or “that gal” who misses out on Wake Forest’s greatest Saturdays.