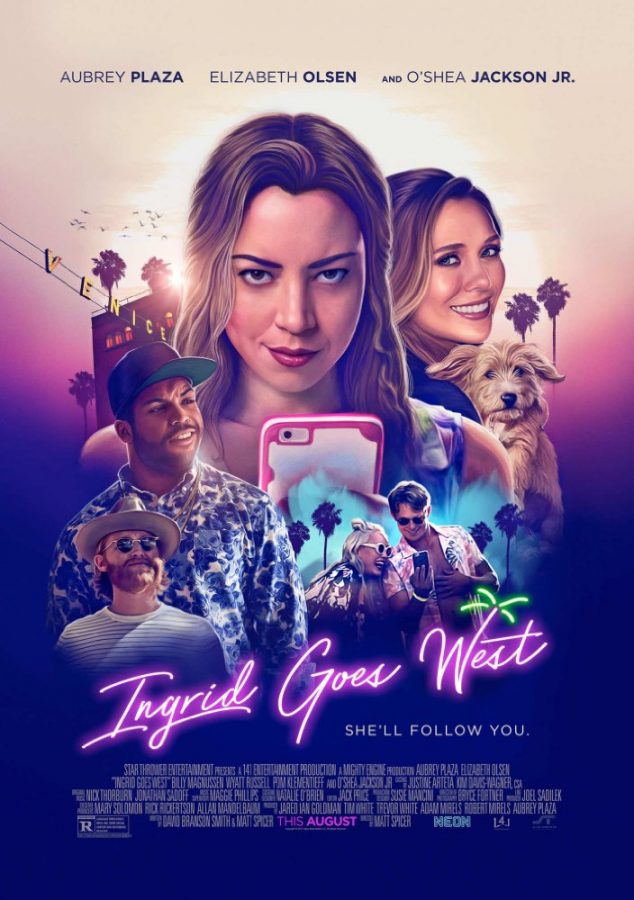 Peter Bogdanovic, director of The Last Picture Show (1971), famously courted the women who were acting on his sets.

He is especially known for having an extremely ostentatious relationship with Cybil Shepherd (Taxi Driver), and the two were known to flaunt their togetherness all throughout Hollywood in the 1970s. Bogdanovic, baffled as to the annoyance of his relationship, asked Cary Grant, “But Cary, doesn’t all the world love a lover?” Grant responded by saying, “Don’t you believe it. It isn’t true. Just remember one thing, Peter, people do not like beautiful people.”

Matt Spicer’s new film, Ingrid Goes West, is a one that explores this world of “beautiful people.” The film opens with screenshots of Instagram posts against a white background, their captions narrated through the vacuous vernacular that permeates our image-addicted consciousness. It then cuts to a close-up of Ingrid’s face, mushed in an ugly contortion of tears and sadness, all illuminated by the glow of an iPhone screen. This, the films posits, is what social media does to us.

Ingrid (Aubrey Plaza) mistakes online “follows” and “likes” for real relationship currency, and runs her life as a reckless chase to befriend her latest Instagram obsessions. We as viewers are privy to this particular, though not isolated, misadventure. Ingrid is infatuated with Taylor Sloane, a California Instagram star who eats avocado toast and dreams of opening an antique bed and breakfast in the California hills. Due to a big cash influx, Ingrid uses her newfound wealth to move out to California and try to leverage her way into a friendship with Taylor — and it works, for a little while. Ingrid befriends her through stalking and internalizing Taylor’s every like and dislike, and creates a persona she thinks will acquiesce perfectly with Taylor’s quasi-eclectic tastes, which ironically are themselves intensely calibrated. The relationship between Ingrid and Taylor takes a predictable course once it starts — a confluence of “common interests”, tailored (pun intended) by Ingrid to check every block, and the eventual disaster when Taylor finds out about Ingrid’s stalker catalog of Taylor’s physical and psychological regalia. There is Taylor’s cosmopolitan brother-jerk, Nicky (Billy Magnussen), and Taylor’s husband, Ezra (Wyatt Russell), the struggling artist with a brooding rectitude about him. Each of the two act as the proper tangentials that help fill out our farcical L.A. milieu.

But the greatness of Ingrid Goes West is in its social commentary. The film’s subject matter couldn’t be more relevant, and communicates through mostly comedic means. But when you dive into the film’s social-ontological argument, it is just as darkly nihilistic as it is supremely comedic. It’s as if David Foster Wallace wrote a screenplay that was entirely shorter, lighter and less digressive than much of his major work. Ingrid is a social medialite, an Instagram-obsessed girl who is so caught up in culture she can barely catch her breath, barely stab at originality or what it means to be an individual because she is so busy superimposing trends or trying to ingratiate herself into the internet-celebrity crowd of phantoms.

She stalks, meets and manufactures a friendship with Taylor Sloane, who herself claims Joan Didion’s The White Album as her favorite book, but has never read it. There are many great moments of inane dialogue, the sort that typifies the ersatz personalities of social media celebrities, and the film communicates most effectively through its perusal of this very lexicon.

Early into Taylor and Ingrid’s relationship, Ingrid confesses that Taylor is “by far the coolest, most interesting person [she’s] ever met.” Taylor responds with the panoramic sociality sadly typical: “You’re so funny. I love you so much. You’re amazing.”

Platitudes in plenitude is Standard Operating Procedure for the social media legionaries of our age. As Taylor’s husband Ezra says, “Everything is the best with Taylor. It’s exhausting.”

Ingrid is so caught up in the whirlwind of social media’s seductive fantasy that it literally takes her breath away. In trying to constantly modulate her personality to optimize her relationship with Taylor, she is left vapid and rendered absurd to both herself and the world. The façade eventually wages a mutiny against the self.

The only reprieve, it seems, is Ingrid’s landlord, Dan, played by O’Shea Jackson Jr. Dan is a struggling, Batman-obsessed screenwriter who is nothing if not simply and pleasantly himself, something Ingrid believes is useless.  Of course, throughout most of the film Ingrid is either ignoring or using Dan, but eventually she recognizes he is the fiercely charming antithesis to her own superficiality.

In the final scene, when Ingrid finally confronts her existential anguish, there is a span that encapsulates the pathogen we are all afflicted with, and Plaza delivers a powerful monologue on the deleterious effects social media can have on our lives. These platforms that are supposed to promote sharing and connectivity, paradoxically make us feel more alone and isolated.

Seeing other’s lives, the greatness of them, reminds us of how un-great we are, how idiosyncratically alone we feel because our personalities aren’t in natural step with the stars of Instagram. It is terrifying, and devastating; the phone acts as a kind of vampiric talisman, absorbing us into its paradox of solipsism. It impacts us on such a deep psychological level that makes it nearly impossible to unmuck ourselves of conformist, uniformist ideas. Emotional validity lies in the statistic that every time we check social media we become slightly more depressed than before we opened it. The film ushers us into a space of emotional reflection, and shows us on a relatable level what happens when your world revolves around such a twisted notion of the self.