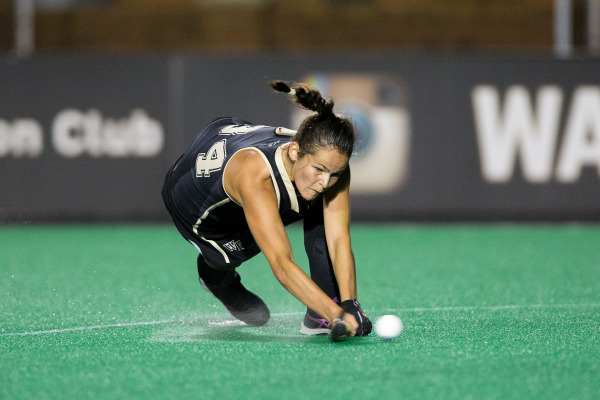 After beginning the season 1-3, the No. 19 ranked Wake Forest field hockey team has rebounded successfully with two crucial wins over No. 4 North Carolina and No. 23 Ohio State in the past week.

Wake Forest played ACC rival University of North Carolina on Friday, Sept. 8 in their first home match of the year. Sophomore forward Nicole Pluta, who won ACC Freshman of the year in 2016, notched the first goal of the match late in the first half, giving the Deacons a lead they wouldn’t relinquish in the eventual 3-1 victory. The other goals were supplied by senior team captain Karlee Spirit and junior Jule Grashoff and assisted by junior captain Megan Anderson.

“I think Nicole’s goal in the Carolina game was just a ‘hey, she’s back’ and to the rest of the team, an ‘okay, we have more shared responsibility now,’” said Head Coach Jen Averill said. “People like Jule — she has some pretty big shoulders and she bears a lot of responsibility for the scoring, and I know that having Nicole back with she and Rachel and everybody on our front line affords an opportunity to share the wealth.”

The win marked the second straight time Wake Forest has defeated North Carolina at Kentner Stadium, where they last defeated the Tar Heels in 2015, 3-2, though North Carolina had won 17 of 18 matchups against the Deacs dating back to 2008 before Friday’s Deacon victory.

Two days later, on Sunday, Sept. 10, Wake Forest took on the Ohio State Buckeyes at Kentner Stadium in search of their third victory and a .500 record. Wake Forest scored first again, with Grashoff making it 1-0 in the third minute off of a corner. Additional goals from freshman Elisha Evans and junior Emily Adamson, along with two assists from Anderson propelled the Deacs to a 3-1 victory.

The Demon Deacons have played an exceptionally tough schedule to begin the year, with six of seven opponents ranked in the national top 25. Coach Averill explained that the schedule design places the Deacons in a prime position with regards to both rankings and on-the-field tests.

“Our scheduling is intentional, and we want to make sure that with our scheduling, it puts us in a position for our RPI (Rating Percentage Index), so it’s a great challenge,” said Averill. “I think right off the bat, it allows you an opportunity to exactly see where you are with some of the better teams.”

“This year we had a really good preseason so we were ready for it, so we came out really hard and strong against Iowa,” Anderson said. “Looking at our schedule, every game is a hard game, so not having that easy game lets you stay in that mindset of pushing hard, so we don’t let our foot off the pedal there.”

Wake Forest will travel to Syracuse on Saturday, Sept. 16 to take on the No. 5 ranked ACC rival. While the Orange haven’t allowed a goal this season, an impressive statistic,  Anderson is confident in the Deacs’ gameplan. “We think we can score against them, especially with attacking corners,” Anderson said.

“We’ve been working on some variations that we think we can beat them with, and our gameplan is to move the ball forward and use our speed out wide. If we can get the ball to Jule on the outside or in a one-on-one, we back her to get it in there.”