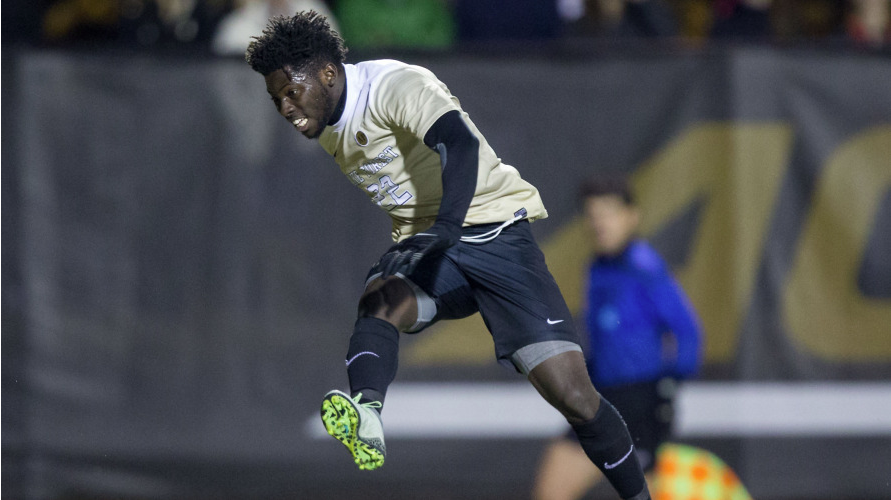 After a painful loss to Georgia State in overtime, the Demon Deacons traveled to Louisville to take on the No. 8 Cardinals.

Louisville opened the score early, with Tate Schmitt hitting a header following an assist from Adam Wilson. This has been one of the areas that the Deacs have had some issues with — aerial defense.

A few weeks ago, against Providence, the Rhode Island squad’s lone goal was a header after a Wake Forest defensive miscue. The Deacs defense against Louisville, although really solid, had a defensive lapse against Louisville again, ending in the first score of the match. A couple of minutes later, Jon Bakero, Senior, hit a shot inside the left side of the box to make the score even.

Coming into the second half, the Deacons played with more offensive consistency, pressuring Louisville with quick transition offense. At the 55’ mark, freshman duo Brandon Servania and Omir Fernandez combined on a nice volley of passes, resulting in a delivery to Ema Twumasi, who scored his first goal of the season. Later on, Fernandez performed an impressive individual play and finished inside the left post to increase Wake Forest’s lead. The final score against the Louisville squad was 3-1 for the Demon Deacons.

The App State game started the same way as all the other Wake Forest home games so far: with the Deacons taking control of the match early, dictating the rhythm of the game and putting a lot of offensive pressure. The first half was punctuated by good shot attempts from  Bakero, freshman Justin MacMaster and freshman Fernandez. Most of the game was played on Wake Forest’s offensive side of the ball. However, the score remained untouched through the first part of the game.

Picking off from the pressure generated on the first half, Twumasi scored a beautiful crossing shot after being assisted by Jon Bakero to open a 1-0 lead for the Demon Deacons.

A couple of minutes later, Bakero and Brad Dunwell combined to deliver the ball to Twumasi inside the box. The freshman found the net again to score his second goal on the match and give Wake Forest a comfortable 2-0 lead.

At the 74’ mark, after a bad defensive transition by App State, Omir Fernandez crossed the ball inside and sophomore Bruno Lapa took advantage of the poor defensive positioning to put the ball in for his first goal of the season.

Of course, part of that was due to the Montaineers lack of playmakers in their creation sector, but being able to totally shut down an opponent for the entire match is no small feat.

The final score was 3-0 for the Demon Deacons.

When asked about the overall defensive performance of Wake Forest during the App State game, Coach Muss commented: “I know this sounds really silly, but I was talking with the team and the staff midway through the first half that we have to get better defensively. I just thought they were finding some pocket space in the center and we don’t want to allow it to happen.

“Obviously, we will take a look at it and hopefully we will get better for Saturday. But, I think the mentality was good for 90 minutes. You know, it was an even, balanced performance. To come back out of halftime and get the goal as we did was a great response for the halftime [adjustments]. We played 22 guys this game. nine shots each half. 18-0 you don’t see it very often. I was pretty proud of the guys in the way they responded [to the first half performance].”

Overall the Deacons played a perfect tactical game. Whenever a team completely shuts down the opposing attack for 90 minutes, there isn’t much for the coach to complain about. Couple that with Wake Forest’s powerful offense and you have the ideal recipe for a deep run into the College Cup. If the Demon Deacons are able to maintain this level of defense against stronger teams, the sky’s the limit for this year’s group.