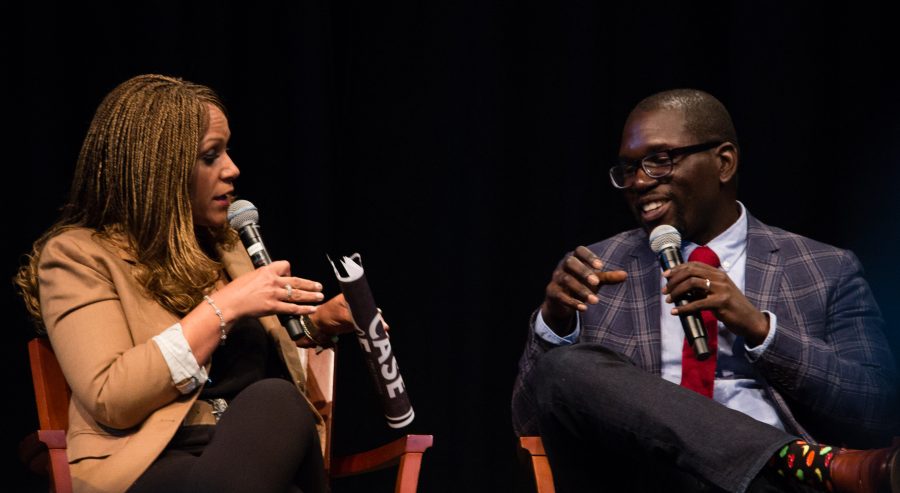 As one of the first events in its yearlong “Rethinking Community” effort in which the campus is encouraged to explore what it means to live in a diverse and polarized world, the university held a panel entitled “The Case of Charlottesville: Why Charlottesville and What it Means for the Rest of Us” in Wait Chapel on Sept. 7.

Its goal was to engage a variety of perspectives in dialogue to help the campus and Winston-Salem community process the deadly white supremacist, neo-Nazi “Unite the Right” rally in Virginia last month.

The event was co-sponsored by a large number of Wake Forest organizations, from nonpartisan entities to groups representing all parts of the ideological spectrum. They included, but were not limited to, the Office of the Provost, the Anna Julia Cooper Center, the Eudaimonia Institute, Student Government, Office of Latin-American Students, Black Student Association, the College Democrats, College Republicans, Intercultural Center, the Wake Forest Review, and others.

Melissa Harris-Perry, the executive director of the Pro Humanitate Institute and founding director of the Anna Julia Cooper Center, moderated the panel and began the event with a discussion of what the events in Charlottesville meant to her personally, given that they took place in her hometown. “It is a bizarre experience to watch the city you grew up in turn from Charlottesville to #Charlottesville,” she said. Her father was the first dean of African American affairs at the University of Virginia, and according to her, what happened in Charlottesville was both personally and politically excruciating. Harris-Perry also emphasized that the majority of Confederate statues across the country were built during times of white supremacist resurgence; most date back to the Jim Crow era in the 1920s or the Civil Rights Era in the 1950s.

Harris-Perry was joined on the panel by Michael Signer, the mayor of Charlottesville and a Madison scholar at UVA; Jamelle Bouie, a chief political correspondent at Slate and University of Virginia alumnus; Michael Dougherty, a senior writer at National Review and lecturer at UVA; Rashad Robinson, the executive director of Color of Change and Takiyah Thompson, an activist and junior at North Carolina Central University who was a leader in the removal of a Confederate statue in Durham, North Carolina.

Signer brought up the fact that the true character of Charlottesville is different from the image that has been portrayed in the intense media coverage of the rally. “All of a sudden we became a hashtag and I think the meaning of what has happened will be worked out for years,” he said. “The thing that we’re all grappling with, locals, is that Charlottesville is totally different from the image that has been hoisted upon us.”

Bouie provided the perspective of a former UVA student of color with experience in Charlottesville’s atmosphere surrounding race. “What’s interesting about Aug. 12 from my perspective was that it was hard to tell who was part of the Unite the Right gathering and who wasn’t, who was from the outside and who was from the community,” he said. “No Imperial Wizard costumes — [it was] very difficult to tell who was there for the rally and who you might see around town — that hate is everywhere.”

Dougherty, the conservative perspective on the panel, argued that while President Donald Trump’s reaction to the terror attacks in Manchester in May was unpresidential, one aspect of it was fairly accurate and applicable to the white supremacists: Trump said that the terrorist should not be called monsters but “hateful losers” and that calling them monsters gave them too much credit and “they’d like that.” He added that some of the white supremacists were looking for evidence of violence against them to leverage mainstream conservative fear of antifa into support. “There’s this fear of antifa and the actual fascists saw they could leverage that fear,” he said. “But they got the opposite — footage of one of their number engaging in a style of terrorist attack associated with radical jihadism in Europe.”

Robinson organized Color of Change, whose motto he described as “not just responding to moments but trying to find a systemic pivot.” His activist group started a campaign to four major credit card companies listing sites where people buy alt-right paraphernalia. “You could put your PayPal in there, put your MasterCard in there, and have it shipped to your house,” he said, arguing that blocking white supremacists from purchasing propaganda and paraphernalia could remove momentum from their movement. “And I was like, no. No.”

The group has had a spike of success since Charlottesville. Beforehand, only PayPal and Apple Pay had blocked white supremacist sites, but “within about 72 hours of Charlottesville it was somehow legal for [other companies] to remove sites,” he joked. “They began doing it quickly.”

Finally, Thompson, the only woman and only student on the panel, spoke about her experience in helping to topple a Confederate monument in Durham. She was the first person to be arrested there. While she was given the shortest amount of time, she spoke strongly about the cyclical nature of racial exploitation and the hidden forms of structural, racially targeted violence that still exist in the U.S. “Defunding schools is violent,” she said. “Body-slamming kids is violent.” One question that Harris-Perry posed to her concerned what statues of whom she would replace Confederate statues with if she had ten million dollars. “It doesn’t take ten million dollars to replace a statue,” Thompson answered. “It takes a couple of materials — a rope and a ladder — and a couple of people. I would make a reparations project.” Harris-Perry also posed the question to the audience, who suggested Ella Baker or Ida B. Wells, among others. Ultimately, “you can’t reform white supremacy,” Thompson said bluntly. “You have to get rid of it.”