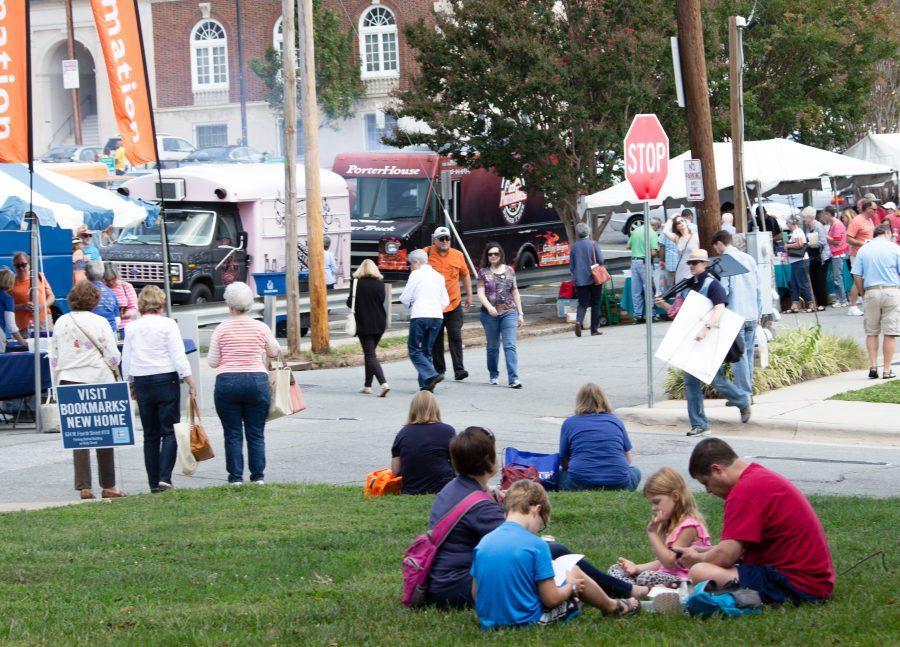 Bookmarks, a Winston-Salem based literary nonprofit, held its annual book festival from Thursday, Sept. 7 through Sunday, Sept. 10, in and around venues on Spruce, Holly, Poplar and Fourth Streets.

The festival, which is the largest of its kind in the Carolinas, hosted over 40 poets, storytellers, illustrators and authors from a variety of genres for readings, panels and book signings.

This year, Bookmarks also welcomed festival-goers to its new expanded headquarters and brick-and-mortar independent, nonprofit bookstore that opened in summer 2017 in a converted 1930s garage.

Although some events were ticketed, including meet and greet events with New York Times bestselling authors Jamie Ford, Jancee Dunn, John Feinstein and Robert Hicks many were free.

Other events included a yoga class with yogi Jessamyn Stanley and Village Yoga Studio and a flash fiction workshop with author Steve Cushman.

The festival kicked off at Foothills brewery and ended with the keynote closing speaker Diana Gabaldon, author of the award-winning, #1 New York Times bestselling Outlander novels and co-producer and adviser for the popular Starz network television series based on her novels.

Foothills collected used children’s books and donated a portion of the day’s proceeds to advancing literacy. The brewery features a new IPA each month, changing themes annually. In 2017, they have dedicated each beer to raising awareness of and donations for a different cause, an initiative called Craft Happiness. September’s brew is the Bookwork IPA.

The festival also featured programming for young children and students of all ages, including a bilingual Spanish and English story time, a celebration of the projects created for Bookmarks’ summer reading program for students K-12 and a scavenger hunt celebrating the 30th anniversary of Where’s Waldo?

“I hadn’t visited Bookmarks before, but had been meaning to go to the store since they opened,” said anthropology professor Karin Friederic. “The festival was a perfect opportunity to visit the store, support their work, and celebrate their new role in our community. With a baby at home, we haven’t been getting out of the house as much as we used to, but bilingual story time was a big draw, especially since we’re trying to get our child accustomed to hearing and speaking different languages.”

“I thought they had a nice variety of vendors there and I thought they did a good job of reaching out to community members,” said junior Taylor West.

On Saturday, there was also an author panel, “The Race Divide,” that was attended by a number of Wake Forest students.  62-year-old Beverly Tatum, author of Why Are All the Black Kids Sitting Together in the Cafeteria: And Other Conversations About Race, which was recently updated for its 20th anniversary in 2017, and 38-year-ld Marc Lamont Hill, author of Nobody: Casualties of America’s War on the Vulnerable, from Ferguson to Flint and Beyond discussed the dangers of the ways in which schools and communities are racially segregated today.

“I really liked the dynamic of the age difference between the authors,” West said. “They each had very different life experiences and they brought a lot to the conversation.”

The pair presented a slew of statistics about mass incarceration and zero-tolerance “broken windows policing” specifically referring to cities like Ferguson.

“I thought it was really powerful,” said freshman Alex Ialeggio. “It offered a a different perspective to actually hear people talk about it besides just reading books.”

“You were four years old when 9/11 happened,” Tatum said. “You were 11 when the economy tanked. … You were 11 when President Obama was elected. … When you were 15, Trayvon Martin was killed. When you were 17, Michael Brown was killed and Ferguson erupted. And when you were 19 going on 20, Donald Trump was elected and Nazis were marching in the streets. Whether you think things are better or not is largely going to depend on your identity and what part of these stories you identify with.”

Hill said he saw hope in the way that “140 character culture” has politicized and mobilized younger generations and helped them quickly disseminate information, referencing the quick response to Ferguson.

“I see the most possibility at colleges and universities where they’re engaging in intergroup dialogues,” Tatum said.

The panel ended with an audience question and answer session that revolved around leveraging white identity development with feelings of white shame and guilt. Tatum addressed the myth of the collapse of white male privelege.

“If you’re a white guy who has lost his job and is feeling very economically disfranchised, you’re not feeling very privileged,” Tatum said.

The author explained that these issues still affect black men more in a way that may not be visible to white men, saying that a white male with a criminal record gets more job interviews than a similarly credentialed black male with no criminal record. Tatum encouraged white people to allign themselves with white, anti-racist heritage.

Freshman Kerrianne Riley, who is from Charleston, South Carolina and recalls the city’s climate after the 2015 church shooting that killed nine black people, was impressed by the talk but discouraged by some of the questions asked.

Bookmarks will host many other events throughout the fall, including a film at a/perture on Tuesday, Oct. 12 at 7 p.m.and a talk with Wake Forest faculty and alumnus L. M. Elliot, author of Suspect Red on the Cold War and Red Scare on Sunday, Oct. 15 at 3 p.m.