UndocuDeacs organize in defense of DACA 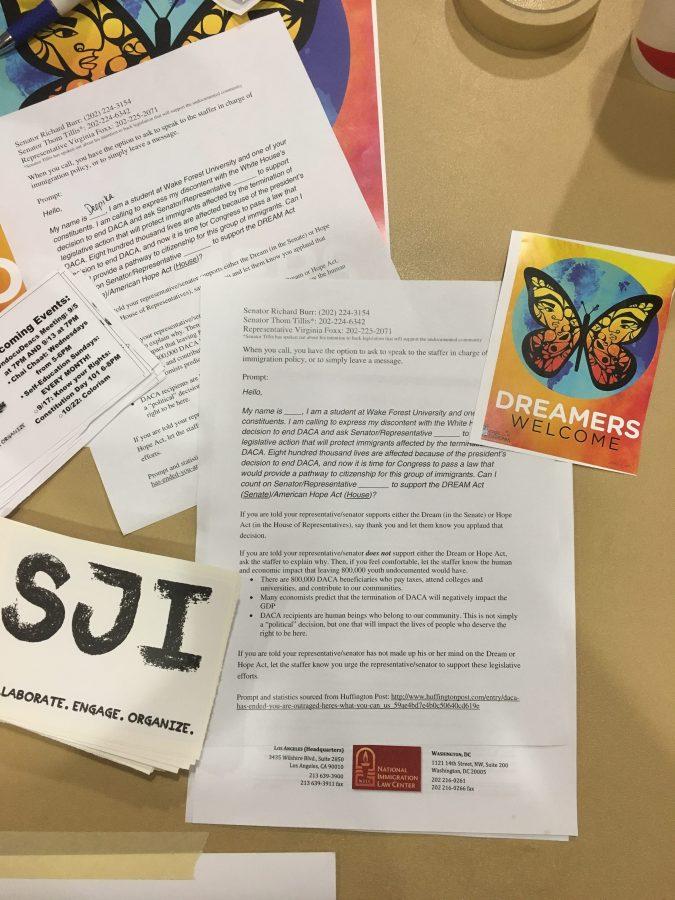 On Sept. 5, the White House moved to end an Obama-era program known as Deferred Action for Childhood Arrivals (DACA), which allows individuals brought into the U.S. without documentation as children to live, attend school and work without fear of deportation.

The decision followed strong warnings from fellow Republicans not to scrap the program, but after conversations with Attorney General Jeff Sessions, President Donald Trump justified the move with the argument that Congress, not the executive branch, is responsible for writing immigration policy. He has pressured the legislature to submit a solution within the next six months, although it is unclear whether Republican lawmakers, who have struggled for years to agree on an immigration reform package, will be able to develop a law by March.

Reactions from both Democratic and Republican congressmen and senators were overwhelmingly critical and reflected widespread concern for the 800,000 DREAMers (Development, Relief and Education for Alien Minors) across the country. The majority of opponents of DACA do not oppose its philosophy, but its implementation; a handful of Republican lawmakers would like to see it codified into law rather than existing as an executive order. To be sure, it was a bipartisan team of lawmakers, Sens. Dick Durbin (D-IL) and Orrin Hatch (R-UT) who originally introduced the DREAM Act in 2001. Durbin was joined by Sen. Lindsey Graham (R-SC) and other Democrats and Republicans in the 2013 Gang of Eight that wrote an ultimately unsuccessful immigration reform bill. Durbin and Graham have both been loud voices across the aisle calling on Congress to act quickly to codify DACA.

The university responded to the news by sending an email to the student body in support of DACA students on campus.

“It is critically important for everyone in our campus community — and especially those worried about their safety and freedom to pursue their studies — to know that Wake Forest is here to support all our students, including those who are not U.S. citizens,” read the letter, which was sent on behalf of the Office of Diversity and Inclusion (ODI.) “Our campus is richer for our diverse population and we will continue to provide financial aid, support services, and connection to legal resources for undocumented students. You belong here and you are welcome here.”

The Wake Forest administration’s history of support for undocumented students is mixed, however — last December, President Nathan Hatch joined hundreds of other university leaders in signing a petition asking Trump to allow DACA to remain in effect, but Wake Forest did not join many of its peers in becoming a sanctuary campus.

Sophomore Maria Cortez-Perez, who is an undocumented student who obtained DACA status, called on the administration to take a more active stance in advocating for  and protecting its undocumented community than it has done in the past. “I personally hope President Hatch does everything he can, explicitly, in his capacity to support undocumented and immigrant students on campus,” she said. “However, considering that we never became a sanctuary campus speaks volumes about our administrative leadership here at Wake Forest University. Being at an elite prestigious academic institution, President Hatch and the administration should recognize their unique positions of power and influence. Academia, historically, has played a huge part in matters of social justice and right now we need that.”

Senior Cameron Steitz, who is a Program Director for the Social Justice Incubator, said that the student response to the decision is equally as important as the administration’s response, if not more. “I’m more curious how the student body will respond,” he said. “I think the email that was sent from ODI was a symbolic gesture of support, affirming that everyone belongs at Wake. It certainly highlighted a hope and expectation that I have for the university to speak out and support any group of students in our community…at the end of the day, the response of the student body also has the potential to make a massive impact.”

In addition, the student interest group UndocuDeacs, which operates through the Social Justice Incubator, was developed shortly before DACA was rescinded to organize advocacy programs and activist initiatives.

“UndocuDeacs is a safe space and a program where we build bridges with other communities. In all, UndocuDeacs is group whose goal is to promote awareness, education, and build bridges between allies to help support our undocumented and immigrant community,” Cortez-Perez said.

Cortez-Perez also commented on her dismay when she heard of the White House’s decision, which will directly affect her and every DACA student at Wake Forest. “My first reaction was simply to be in shock. I started pacing back in forth in my dorm when I found out the news and started crying,” Cortez-Perez said. “I could not believe that it was really happening. I don’t think people understand how detrimental this is to thousands of individuals.”

“I don’t think that there’s one word to capture how I felt when Trump made his decision,” Steitz said.

“While my own emotional response was all over the place, my thoughts went immediately to the people who are directly impacted by this decision, knowing what this would mean for them and their families. This is made even harder because we honestly have no idea what will happen in the next several months.”

Steitz added that it is important that members of the campus community respond by staying informed, getting involved in activist efforts and having well-informed conversations.

“By being a part of the Wake Forest community we claim to embody the idea of ‘Pro Humanitate,’ but that claim is worthless if we’re not doing something to prove it,” Steitz said. “Whether that means reading articles, watching documentaries, calling our representatives, or participating in larger protests and events, there are so many resources on campus. We have the power to shift the narrative and to show support not just symbolically, but with our voices, actions, and votes.”

So far, UndocuDeacs and the Social Justice Incubator have organized several opportunities for students to share their support for DACA. On Sept. 13, the Social Justice Incubator held a Call to Action to Support DACA in the lobby of Benson, where students could write letters urging North Carolina Republican senators Richard Burr and Thom Tillis, as well as Winston-Salem’s Republican congresswoman Virginia Foxx, to protect DACA. Students could also obtain information about making phone calls to the offices of their congressmen and senators.

On Sept. 14, professors and students will speak in defense of DACA at the Speak Out rally on the lower quad.