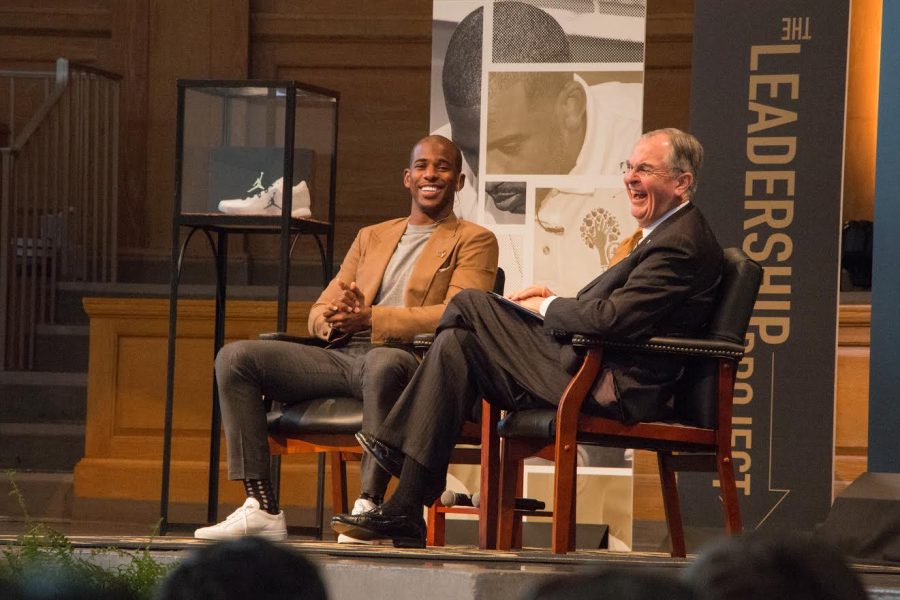 Three years ago the Leadership Project was launched with the intention of inspiring the Wake Forest community through the sharing of stories from leaders that spanned a variety of age groups and professions.

These leaders represent a diverse collection of world-views and life experiences.

Through this initiative, students and faculty have had the distinct privilege of hearing from individuals such as Donna Edwards, Maryland’s first African American congresswomen, interfaith leader Eboo Patel, entrepreneur Charles Best and Super Bowl-winning coach Tony Dungy. Each of these guests visited the Reynolda Campus and brought with them a willingness to engage in a conversation about their respective successes and failures so that our community could benefit in a form of collective learning.

On Wednesday, Sept. 13, the Wake Forest community welcomed back one of their own, Winston-Salem’s “hometown hero” and basketball great, Chris Paul.

Paul is one of the most talented and respected players in the NBA, having earned countless accolades on the basketball court, but seemingly just as many off of the court.

For an hour, President Nathan O. Hatch engaged Paul in conversation, asking questions in front of a full Wait Chapel crowd about leadership and character for both Paul the basketball player and Paul the humanitarian.

As an admired leader among his teammates and competitors, Paul was elected as president of the National Basketball Players Association (NBPA) in August 2013, a position for which he has been recently reelected.

Paul shared that for him, leadership is often doing what others are unwilling to do, and cited his leadership in the NBPA as such an example.

According to Paul, serving as the NBPA President can be quite demanding, especially as it is an unpaid position. It requires frequent visits to New York City to meet with league commissioner Adam Silver, as well as frequent phone calls with those who run the business of professional basketball.

Paul also identified that this principle of leadership can be applied to some of the smaller things in life, such as attending events that are meaningful to his teammates, even the players that may sit on the end of the bench. As the leader of his team, Paul believes that his teammates hold a top priority in his life, meaning that if a teammate ever needed anything, a conscious effort would be made to do what ever he could to support them.

“People remember your actions, if you practice what you preach you will live forever.” These were the words of Paul as he reflected on the many lessons the late Skip Prosser taught him while at Wake Forest.

Paul recalled some of his favorites, such as “If you cannot be on time, be early,” and “Don’t be a 3-6 guy, be a 6-3 guy,” meaning that what defines you as a leader and as an individual is not what you are doing when everyone is watching, but rather by what you do when no one is around.

“All of his famous sayings allow coach Prosser to live on,” said Paul. “There is not a day that goes by where I don’t think about him.”

Paul considers his family to be the most important piece of his success, crediting his mother and father for being tough on him and raising him to be the man he is today.

Given his love for his wife, two children, parents, brother and extended family, Paul chose to name his foundation the “Chris Paul Family Foundation” as he believes that with many hands, his foundation can impact many communities of people.

Since its inception in 2005, the Chris Paul Family Foundation has supported technology opportunities for kids in Winston-Salem, Los Angeles, New Orleans, Portland, New York and Oakland.

Paul shared that the idea for supporting technology opportunities for kids came after touring his son’s kindergarten in Los Angeles, recalling visiting a computer lab and seeing state of the art equipment. While feeling fortunate that he could provide his son with the opportunity to attend a school with quality resources, Paul realized that other schools probably lacked similar resources.

“Kids shouldn’t be left behind just because they live in the wrong side of town,” Paul shared. Thus, given this realization, Paul’s foundation contributed $2.5 million across the country in an attempt to close the gap in making educational opportunities equal for all.

Wednesday’s dialogue was one of collective learning, capturing the attention of the Wake Forest community and inspiring them through stories of leadership and character.