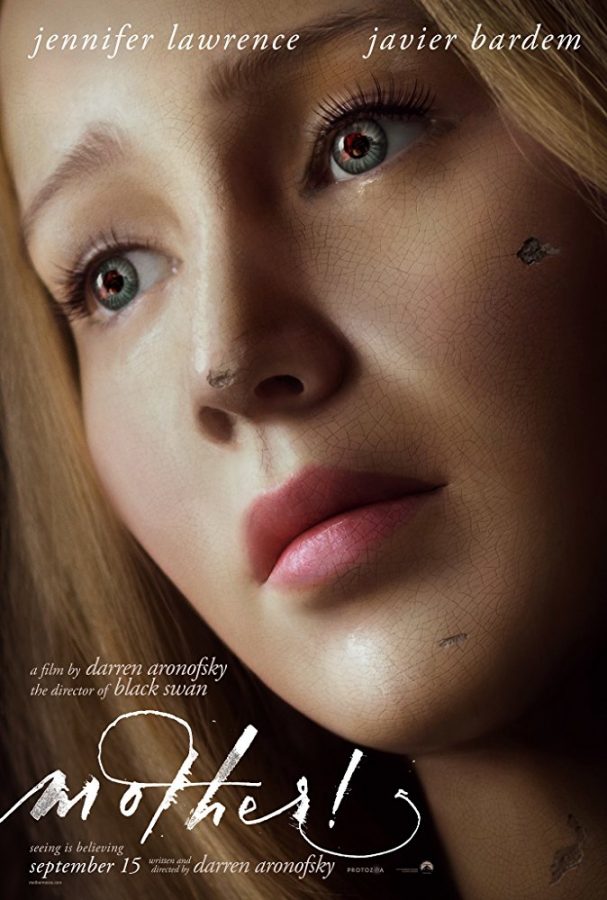 Darren Aronofsky is particularly skilled at depicting the destruction of obsession.

His films Pi (1998), Requiem for a Dream (2000), The Wrestler (2008) and Black Swan (2010) depict people stuck in a dangerous cycle of desperation and fixation, looking for their own form of gratification. Aronofsky’s controversial new film, mother! takes the theme of obsession one step further — showing the extremes of human passion and violence through a thinly-veiled Biblical allegory.

The film is skillfully made, with excellent direction, cinematography and acting, which makes it all the more effective.  However, mother! is one of the most disturbing films I’ve ever seen, with intensely graphic and unsettling imagery. I would not go into a screening of the film expecting something light.

In mother!, Javier Bardem plays an acclaimed middle-aged poet struggling with writer’s block. Jennifer Lawrence plays his much younger doting wife, who gives up her own interests and satisfaction to serve her husband in any way she can. While Bardem’s character spends his days brooding and struggling to write, Lawrence’s character continues to tend to all of her husband’s whims and re-do every aspect of their house, which was burned down sometime before the start of the film. Their routine is interrupted when a strange couple shows up at their home. Bardem’s character invites them to stay without consulting his wife, establishing a pattern where Lawrence’s character is repeatedly ignored, treated with disdain and violated.

Tensions quickly spiral out of control, and Lawrence’s character is stuck in the middle of rising conflict that she did not cause or contribute to.

Lawrence’s character gets a brief reprieve before the second act as she becomes pregnant and prepares for the birth of her child. However, in typical Aronofsky fashion, any focus on linear storytelling quickly goes out the window in favor of drawing the viewer into the metaphor he has created through an unconventional narrative structure. The film’s most horrifying moments happen in the final act as Aronofsky’s allegory is fully realized.

Aronofsky’s use of cinematography and lack of a score makes the film that much more haunting. The camera focuses on Lawrence’s face for the great majority of the film, creating a sense of paranoia, confusion and isolation. We’re seeing everything that is happening from her perspective. We feel her bewilderment, her subdued anger, her desire, and her anxiety.

Because of the position Aronofsky places Lawrence in, she must carry the whole film. With a less skilled actress, mother! could have been boring and even cringe-worthy. Lawrence’s ability to totally encompass her character truly allows the movie to live up to its potential.

mother! is a brazen, challenging and risky film. It’s likely going to be one of the most polarizing films of the year. I understand why people would love it, and I also understand why people might absolutely hate it. There’s no doubt that it’s an excellent film from an artistic perspective, but Aronofsky’s treatment of the material is so difficult to watch at times that it’s almost repulsive. Although I think it’s one of the best films of the year so far — I was intensely uncomfortable during the entire screening. If you’re wanting to be entertained by a typical horror film, I would recommend looking somewhere else. However, if you are prepared to confront complex and unnerving subject matter, I think mother! is a worthwhile film to watch, analyze, and discuss.