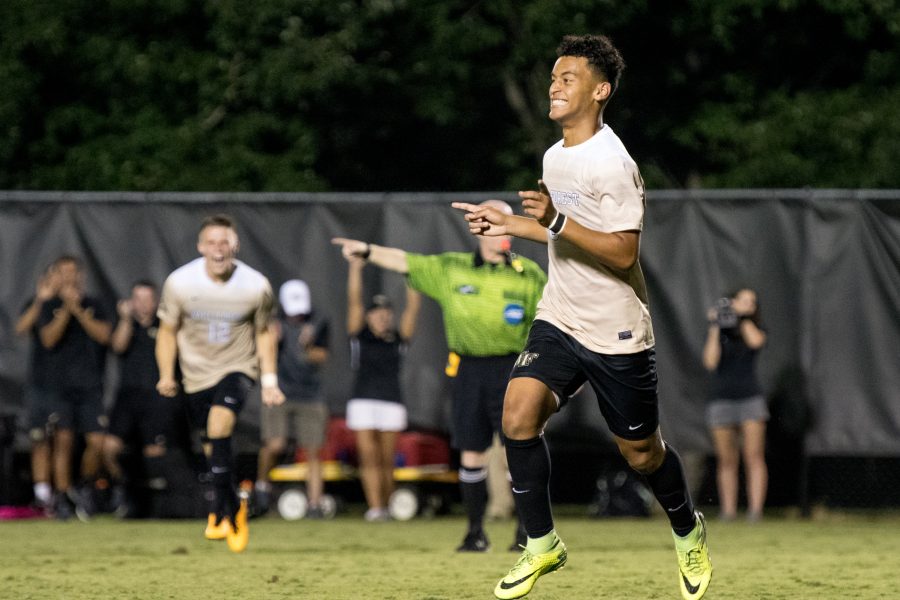 Rated as the No. 13 soccer recruit in the nation, freshman forward and midfielder Brandon Servania is beginning his collegiate career as an influential athlete and a dedicated student.

Do you have a pregame routine?

First, we have the pregame meal, which is a lot of protein and carbs. We always walk as a team from the locker room to the stadium and when you walk, you have to walk on the concrete. You can never touch the grass. Ten minutes before the game we play “Ain’t No Mountain High Enough” and the lyrics are actually written up in the locker room. We shake hands with everybody to wish them luck and then we have our first of many hype ups.

We get in a huddle and our seniors talk to us about the game plan and one of our other seniors does some clapping thing to get us hype. We walk outside and shake hands with the little kids team. We jog across the field as a team, shake hands again, line up for the national anthem and the starters meet for another pep talk by coach. We always kneel and say the Our Father before the game, too. Then we go.

How do you set your goals?

What’s the best advice you were ever given?

It was when my dad said to believe in yourself and your abilities. I was scared at first when I moved from Alabama to FC Dallas in Texas because they were one of the best teams. But when I got there I realized I could compete with them. And then the same thing happened when I arrived to Wake Forest.

How do you have time to be a D1 athlete and full time student?

I don’t have time. Actually it’s all about managing your priorities. My most favorite part of being here is soccer but it takes a ton of work to play in addition to all of the work already assigned. The combination of physical and mental work we put in daily is intense. We focus on taking advantage of our time while working the hardest we can.

What is a regular practice for you?

We warm up with dynamic stretches, go into passing patterns, and then do accelerations to get our heart rate up. Then we go into possession drills, functional and technical drills and a scrimmage.

Do you get aggressive with your mark during the game?

Yes, you have to. If you don’t they’ll take advantage of you. You always have to stand your ground.

Have you ever experienced a breakthrough in your career and if so, what led to it?

One time I pulled my hip flexor and I was out for almost two months. I missed a lot of games and it was so frustrating because we lost two of those games. All I wanted to do was help the team, but I knew that if I hurt it even more it would just make it worse for the entire team. I just kept working hard and I was finally able to play. After that injury, I put more effort and passion into the game than ever before and I was able to learn how to push my teammates from the sideline.

Did you play any other sports to help you with your soccer game?

We play basketball a lot and practice yoga.

What is something that makes you stand out on the team?

My background. Since I’m from Alabama, it was hard to play since there’s not a lot of soccer academies there. When I went to FC Dallas it was a huge deal and I needed to work really hard to catch up. I’ve always thought of myself as a late bloomer skill-wise. Compared to my teammates who went to the National Team Camp really young, I just went this past year. I worked hard to catch up and make it here.

Do you have a motto?