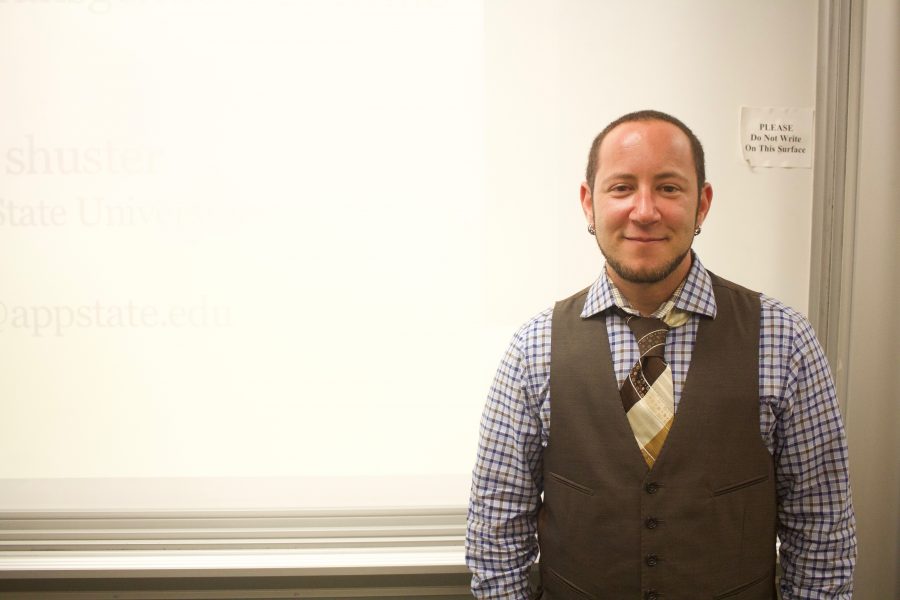 While medical practice has undergone substantial reform since the mid-twentieth century, stef shuster, an assistant professor of sociology at Appalachian State University, argues that the medical treatment of gender identity has in many cases failed to progress beyond its pathologizing treatment as a psychologic abnormality.

shuster, whose name is intentionally lowercase, uses “they” pronouns.

In their lecture, “Passing as Experts in Trans Medicine,” schuster explored how this antiquated understanding of gender identity manifests greatly as uncertain healthcare providers fail to properly address trans people, undermining their expertise as medical caregivers. Additionally, shuster sought to address the baseless application of contemporary medical practice in the context of gender identity.

For a trans person seeking healthcare, the options can be somewhat limited. Regional disparity in the presence and quality of trans specific medical care greatly effects the trans and non-binary populations in the southern and midwestern U.S.

Even those in regions seemingly conducive to trans medical practice, such as the eastern and western coasts, are often treated by medical practitioners with a poor understanding of trans medicine.

Many healthcare providers struggle to navigate the ethical issues posed by their desire to help patients conflicting with their fear of committing malpractice, especially as many of the procedures necessary to facilitate transition lack the testing required for FDA approval.

Specifically, trials to determine the effects of hormonal treatments over lifespans have yet to conclude, as procedures such as estrogen supplementation are recent medical advances.

Additionally, in pursuing a successful diagnosis, it is often typical for practitioners to disregard human context, instead focusing on symptom resolution. Commonly known as “gatekeeping,” clinically prescribed therapists are often made responsible for deciding if a person meets the requisite standards to undergo transition, regardless of the patient’s preference.

In these cases, medical professionals are tasked not only with providing treatment, but also assessing the validity of a person’s identity. In questioning the integrity of this dual responsibility, sophomore Brendy Flores added, “It’s interesting that in trans medicine, [healthcare providers] almost have a therapeutic role instead of a medical role.”

A more progressive, albeit less observed, means of trans medical practice, known as “informed consent,” reserves the decision-making responsibility for the patient, leaving the practitioner to objectively describe the health related effects of undergoing surgery. shuster adds that practitioners should “place more trust in [their patients] as experts over their own identities and bodies.” Practitioners often fear holding responsibility for patients that, after choosing to transition, regret having done so.

This results in fewer informed consent policies, and increased tension in the field of trans medicine.

As dystopic as the current state of trans medicine may seem, it’s not all gloom and doom.

According to shuster, research institutions such as Duke and The University of California, San Francisco have implemented curriculums meant to address the unique needs of trans medical care, and sophomore Rita Venant agreed with shuster in their assertion that “having medical students specialize in LGBTQ-concentrated medicine” might be beneficial to progressing the field.

shuster made sure to clarify that they don’t believe all medical professionals to be ignorant or incompetent. Rather, they commented that many in the medical field are “stumbling” towards progress, often times trying their best help their patients but in doing so causing harm and perpetuating false narratives about the trans and non-binary experience.

As an individual pursuing a position in the medical field, junior Maddie Arnel found it interesting to “think about the dynamic between medicine and categorizing an identity, because the purpose of going into medicine isn’t for medicine’s sake, it’s for people.”

This reflects a hopeful trend in medicine, a shift from rigidly classified diagnoses towards humanistic approaches in the context of identity.

shuster will be compiling their research findings in a book project entitled “Treating Gender: Transgender Medicine and Uncertain Expertise.”