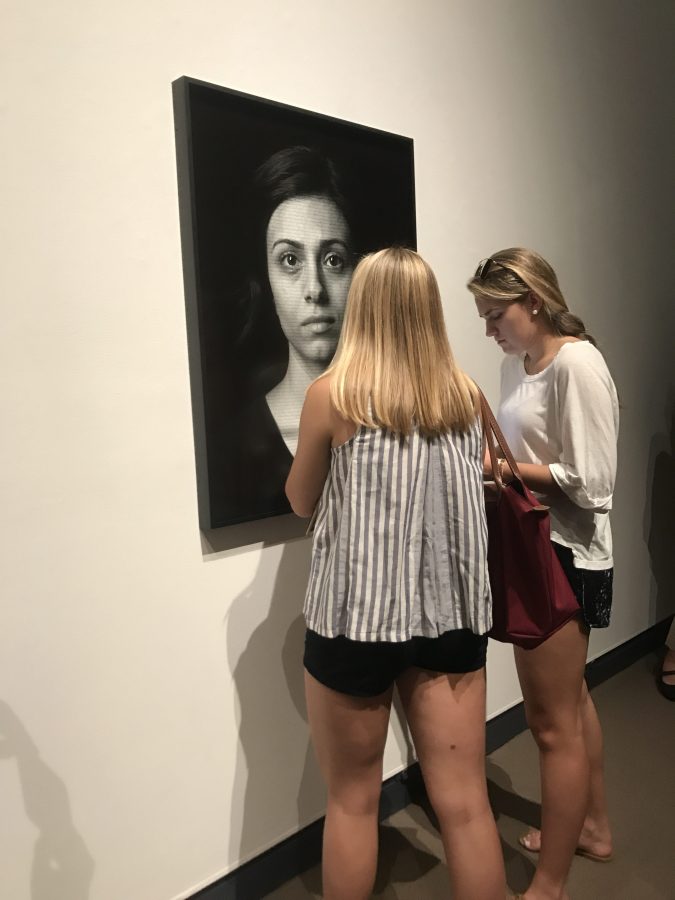 Coined “ex postGlobal,” the collection of pieces represents artists from outside America and depicts a response to current globalization.

SUACC, which consists of current students and alumni, ventured to New York City (NYC) last March to curate the collection. The members were loosely given the idea that the pieces should represent the current generation, but were ultimately given complete creative control under the established budget.

“[The members of SUACC] are from all different backgrounds, but came to the agreement that these are the works of our time,” junior Xinjie Wang said.

The theme, “ex postGlobal,” was further explained by Gallery Director Paul Bright during an introduction to the new exhibition. He discussed the history of globalization, and how each work comes to reflect the artist’s response to globalization based on their own situation.

Continuously, Bright touched upon how SUACC did not aim to choose non-American artists, but how this factor does end up strengthening the theme.

“The artists in ex postGlobal created their work in the period of peak globalization, often in places distant from the traditional focus of a still-decentralizing art world,” Bright said.

As part of the event, members of SUACC presented the art with an explanation of why the piece was chosen, and its interpreted meaning. For instance, Wang presented multiple pieces by Mona Hatoum. She discussed both the historical context of the pieces as well as the artistic techniques they displayed.

The video installation, produced by Sun Xun, is on loan from the Sean Kelly Gallery in NYC. It is comprised of a multitude of drawings, fashioned together in a stop-motion style video. Playing on a continuous loop, the film is easily viewed.

Junior Kayla Amador presented Shirin Neshat’s multi-media portrait that depicted the artist’s experience of returning to post-revolution Iran. She discussed the necessity of viewing the photo up close, as Farsi calligraphy runs across the face in different shades depending on the shadowing of the woman’s face.

With a recommendation to attend from Amador, freshman Erick Mora was part of the crowd at the opening. This was Mora’s first time attending an art gallery, so he said that he was not sure what to expect.

“I’ve never been to a gallery and this was very new to me but [the installations] were very eye opening, so that was really great,” Mora said.

The event ran from 4:30 p.m. to 6 p.m. Although the actual presentation of the collection did not start until 5 p.m., guests were free to roam the exhibit and watch the video installation. To shed light on the process, goers could also watch a short video taken during the NYC trip. It followed the SUACC member’s journey to the different galleries, and gave a sneak peak to the pieces that were chosen.

All of the pieces in the gallery will eventually be displaced by a new collection. However, SUACC has decided to place the artwork around campus for all students, faculty and staff to enjoy.