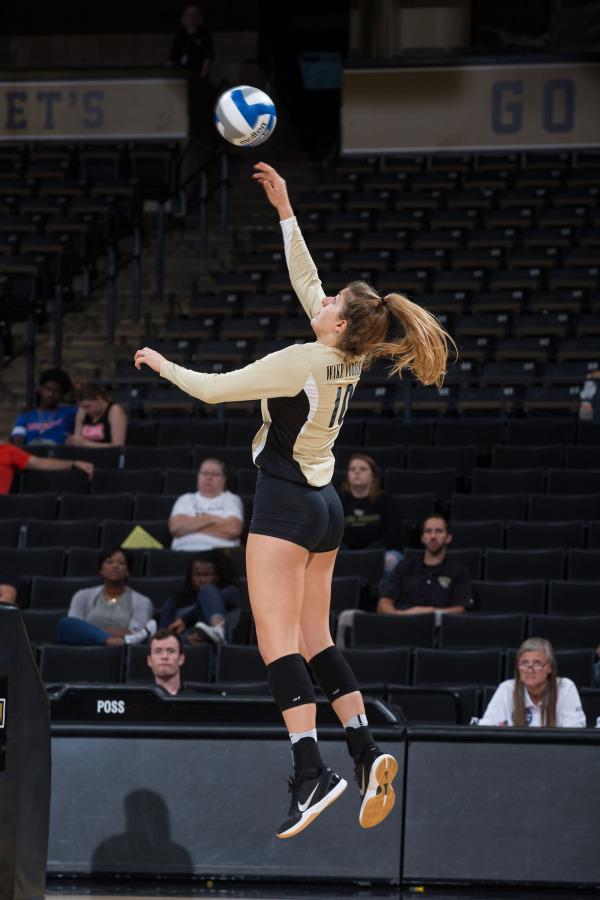 With a 3-1 victory over Clemson last Sunday, Sept. 24, the Wake Forest women’s volleyball team moved to 9-5 for the season and matched their win total from all of last year just 14 matches into the season.

Wake Forest took on Clemson at home in their second Atlantic Coast Conference match of the year, entering the match having dropped their last three contests. As a result, coming into the match against the Tigers, Wake Forest head coach Bill Ferguson changed up the practice routine.

The change prepared the Deacs well for a grueling match against the Tigers, in which all three sets that the Deacons won went over 25 points.

Wake Forest dropped the third set, 25-22, but with the Tigers in the lead in the fourth set at 24-21, the Deacs scored three straight points to equal the score at 24-24. Wake Forest was able to finish off Clemson two match points later.

Wake Forest will take on Boston College Friday, Sept. 29 at home as they prepare for the bulk of their ACC schedule.

“You get into a little bit of a better rhythm because you’re always playing Friday and Sunday, so your game-planning is a little bit more organized,” Ferguson said of the conference schedule. “The first four weeks of non-conference play, you’re playing four matches in three days, so thats a big grind, and sometimes you wonder if you’re prepared enough because those matches where you play back-to-back are real tough.”

The team also added seven new players  from last season to this season, increasing their roster from 12 to 19. The addition of the new players has sparked improvement on the court and camraderie off of it, according to senior captain and outside hitter Kylie Long.

“I think it’s a product of the buy-in of all the girls,” Long said. “Every time we break, we say ‘relentless’, so we’re really working on our brand and our way, especially with the big team, that’s important, because if you don’t trust the system and trust each other, it’s not going to work out.”

For the returning players, the spring season proved to be an enormous boon towards getting comfortable under Coach Ferguson’s system.

“I think the players having a spring to train in our system,” Ferguson said. “We didn’t have that last year, as I got hired in June. Half the team had been through a competitive season and a full spring, and we have more players and more depth, which leads to more competition in the gym on a day-to-day basis.”