Week 3 in the NFL brings exciting action to fans 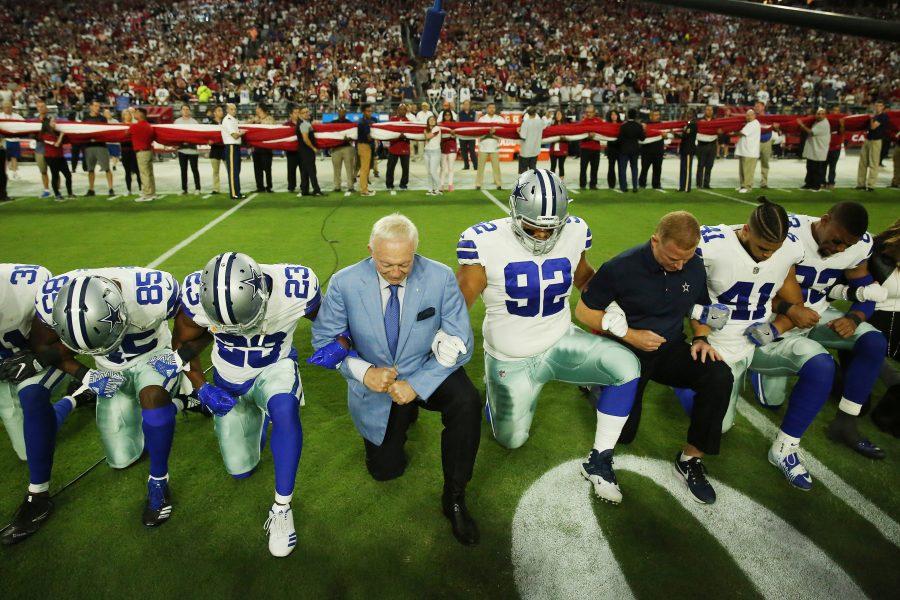 This week was the most politically charged week in recent sports history.

At the start of the weekend, the President tweeted that NFL owners should fire players who decide to protest the national anthem by kneeling. Players around the league united in their response to President Trump’s divisive comments by linking arms—some kneeled, while others stood—in solidarity with their teammates and protest the President.

Additionally, after the NFL received backlash following its first two weeks for boring play, the league delivered one of its most exciting weeks of football in recent memory. Play started Thursday night in game between the Los Angeles Rams and San Francisco 49ers, which the Rams won in a shootout 41-39 in Los Angeles. 2016’s first overall pick, Jared Goff, seems to be improving in his second year. He threw for just under 300 yards and added three touchdowns. This high paced and exciting game set the tone for the rest of the weekend.

The first game on Sunday Sept. 24, the annual London game, was played between the Jacksonville Jaguars and Baltimore Ravens. It was one of very few uninteresting games of the entire weekend. The Jags, who play in London every year, throttled the Ravens 44-7.

Once the 1:00 p.m. games started, however, things got really exciting. It seemed as if every game in the early slate came down to the wire. In Chicago, the Bears shocked the Steelers and upset them in overtime 23-17 on Jordan Howard’s 19-yard touchdown run to end the game.

In Foxboro, the Patriots showed their defense as a huge issue on the season, but were able to narrowly defeat the Texans in a shootout 36-33 due to Tom Brady’s late game heroics, including a game winner to Brandin Cooks with 23 seconds remaining.

In Detroit, the Falcons topped the Lions on the road on a very controversial ending in which a touchdown by the Lions with under 10 seconds left was reversed and receiver Golden Tate was ruled down by contact just inches before crossing the goal line. Vikings backup quarterback, Case Keenum, had the best game of his career after replacing the injured Sam Bradford. He threw for 369 yards and three touchdowns in a shocking 34-17 blowout of the Bucs in Minnesota. Wrapping up the 1 p.m. slate of games, the Eagles and Giants ended in exciting fashion in Philadelphia. After scoring 24 fourth quarter points to take a 24-21 lead, the Giants gave up a field goal to tie the game. Then, as time expired, Eagles rookie kicker Jake Elliot drilled a 61-yard field goal for a walk off win for Philadelphia.

Sunday’s late afternoon games also delivered plenty of excitement. Russell Wilson and the Seahawk put up a strong fight, but even Wilson’s 373 yards passing and four touchdowns were not enough to defeat Marcus Mariota and the Titans in Tennessee. The Packers needed overtime and some late game heroics by Aaron Rodgers to defeat the Bengals 27-24 at home in Green Bay. The dominant Chiefs continued rolling, defeating the Chargers 24-10 on the road to improve to 3-0.

On Sunday night, the Redskins surprised everyone by steamrolling the Raiders, a team with legitimate Super Bowl aspirations, at home by a score of 27-10. Kirk Cousins was phenomenal and threw for 365 yards and three touchdowns.

The Dallas Cowboys got back on track with a convincing 28-17 road win over the Cardinals in Arizona after a poor showing in Denver last week.

After taking a lot of heat for boring games and poor quarterback play the first two weeks of the season, the NFL  reasserted itself. Next week brings some important divisional matchups, most notably the games between the Steelers and Ravens, the Raiders and Broncos, and the Lions and Vikings.