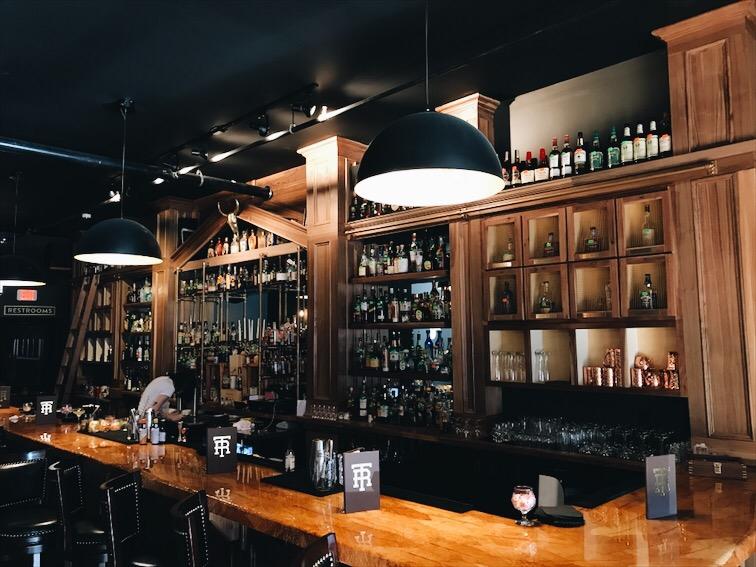 Two different doors await eager visitors as they enter Dogwood Hops and Crops on Liberty Street, located two doors down from Crafted — The Art of the Taco, the popular taco joint.

A right turn reveals a lively, social setting in a bright room. Young people are crowded around long, wooden tables after work, with colorfully designed craft beers and wines in hand.

Taking a left turn leads to a subtly lit Trophy Room bar stocked with aged liquors and is frequented by a mature crowd. The sleek atmosphere is reminiscent of a hidden speakeasy.

The business venture opened mid-July and is the third of Winston-Salem chef Adam Andrews, who is the co-owner and chef of Jeffrey Adams as well as a chief chef for Fourth Street Filling Station.

Andrews started thinking about his plan for the new business around three years ago. Originally, he wanted to start a delivery service for beer and wine.

“I did my research and saw that lots of other major cities had delivery-style concepts,” Andrews said. “I could see how the system would fit well in Winston-Salem.”

For now, the business will focus its delivery efforts on the downtown area, according to Andrews. He is unsure if the bar will deliver to the Wake Forest campus, adding that he and his business partners aren’t sure that they want to “open a can of worms.”

While Andrews and his business partner, Austin Ridge, brainstormed about the alcohol delivery app — expected to be released in the next three weeks — they discussed opening a storefront to accompany their delivery operations.

“We wanted a face to our business,” Andrews said. “We decided to do a bottle shop. We thought to ourselves: let’s have somewhere for people to hang out as well. Once our app is done, we’ll have a bottle shop, bar and delivery service.”

The bar also serves paninis and changes the menu daily.

“We like to say we’re a bottle shop with benefits,” Andrews said. “People can sit down and have a fresh sandwich with their drinks.”

Dogwood Hops and Crops offers the largest bottle and can selection downtown, with more than 200 options in the expansive cooler. Customers can purchase their beer or wine to go, or they can pay a corkage fee to drink at the bar.

“I went for the first time this summer,” said Ben Scharmann, a senior physics major. “I thought it was smart that they have corkage fee, so people can bring their own wine and beer and they’ll open it for you, or you can buy theirs for a cheaper price.”

Scharmann commented on the young, social atmosphere of the bottle shop room, saying he loved how the mysterious ambiance next door was such a direct contrast.

“I stood right near the big, open windows, and I loved the bright, natural light in the beer and wine area. The older crowd and the hipsters who want to drink single malt whiskey were in the other room, then the people trying to meet people and hang out after work were all on the other side.”

She said she loved how clean and modern the space was. She walked by to check it out after eating dinner down the street at Crafted, and noticed that it was completely packed.

“I loved the duality of the two different rooms,” Devine said. “It’s really different from other bars that I’ve seen downtown. It’s trendy and in a great location, which will make it a fun new spot for Wake kids and for the community.”

“We welcome Wake kids,” Andrews said. “They’ve supported Filling Station since 1999, and Jeffrey Adams just hit the five year mark thanks to lots of student support. I hope the bar will do the same.”