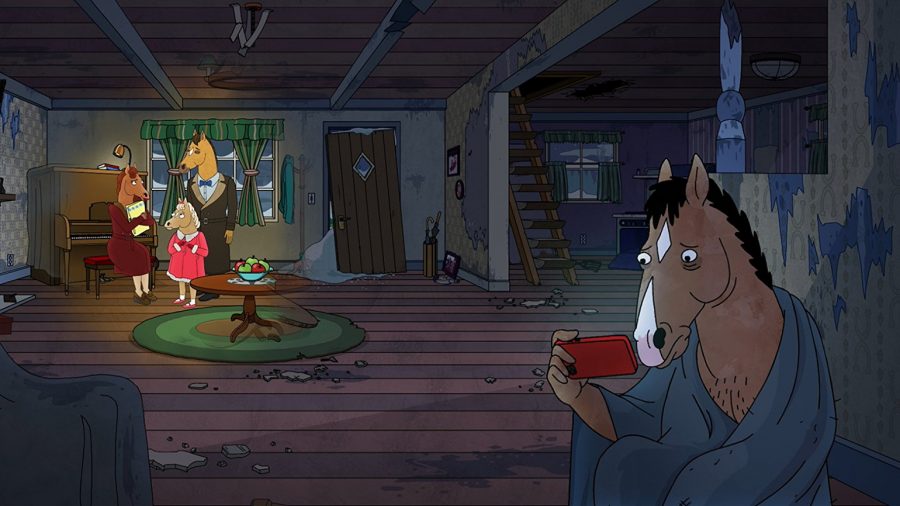 At first glance, BoJack Horseman doesn’t look like anything special.

Just your standard animated adult comedy — this time featuring a world where mankind coexists with a variety of anthropomorphized talking animals. Oh cool, they even have the magician dude from Arrested Development to play the horse. How could this even be comparable to a show like the Golden-Globe winning House of Cards, or the enigmatic Emmy-winning Stranger Things? Despite its outward appearance, BoJack gradually has revealed its hidden layers since its premiere in 2014, via its subsequent four seasons.

Will Arnett voices BoJack, a middle-aged and miserable former television star, still riding the fame and fortune from his 1980’s sitcom Horsin’ Around (Full House’s animal world equivalent). Bojack lives in the fast-paced world of modern-day Hollywood with his couch-surfing slacker friend Todd (Aaron Paul) and is trying to get a memoir published via his witty ghostwriter Diane (Alison Brie). Simultaneously he must deal with the demands of his enterprising feline agent Princess Carolyn (Amy Sedaris) and the pestering from his canine rival Mr. Peanutbutter (Paul F. Thompkins). The show is riddled with animal puns, sight gags, celebrity guest stars and running jokes.

The frivolity of the show, however, is balanced out with heavier material. BoJack’s busy portrait of Hollywood often strays from the humorous, highlighting its shallow and artificial nature. BoJack himself refers to Los Angeles as a “tar pit”. While the concept of phoniness in the movie industry is nothing new, here it is updated to fit the perspective of 2017, the age of the Internet, iPhones and Social Media. Throughout Bojack’s run, it has engaged with a variety of topics, including the Bill Cosby scandal, abortion, depression, sexism, gun control and even the 2016 presidential election. By balancing the weight of these delicate issues with fast paced dialogue and zany comic antics, the show provides a unique combination of the topical and the light-hearted.

Modern television’s incredibly high standards for character development is also met by Bojack. Bojack the horse lives a life of excess, alcoholism and womanizing; one entirely devoid of any sort of purpose or meaning. He betrays those who care about him, and repeatedly behaves selfishly and cruelly towards others. His memoirist Diane is depressed and indecisive about her boyfriend, and his agent Princess Carolyn is ambitious and determined, yet is caught up in the Hollywood rat race. At times BoJack is deeply contemplative and even existential, considering what it means to be “good.” It also seeks to define the true nature of happiness, as the show’s five main characters pursue it. The show cultivates sympathy for its characters, despite their selfishness and their flaws and succeeds in providing a distinctly human element for a show about talking animals.

BoJack maintains a very risky yet ultimately successful balance. It manages to juggle the inane and the profound with an apparent ease, combining self-aware cartoon zaniness with hefty and artful themes and contemplations about life in the modern post-internet world. Stephen Rodrick of the New York Times writes that BoJack, despite its high competition with other television programs and comedies, “has nonetheless attained that status by representing a specific kind of modern unhappiness” (NYT Rodrick). The show’s different avenues of success and its relevance to today make it a must-watch. Be sure to check it out on Netflix, especially in light of the impending Season 5.