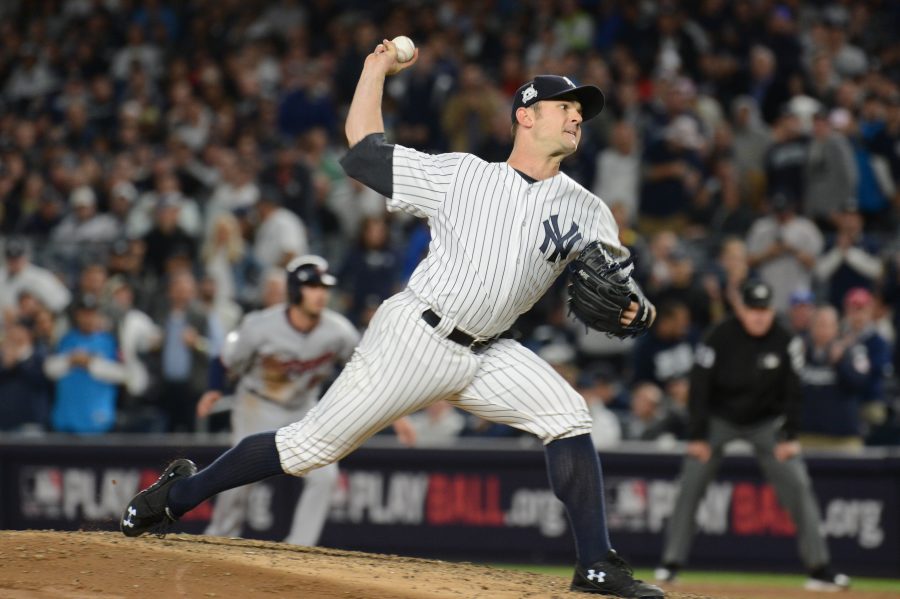 The winner-take-all Wild Card game, while cripplingly stressful for fans of the clubs involved, has been hugely successful in kicking off the postseason with exciting baseball since its institution in 2012.

Tuesday’s game between the Yankees and Minnesota Twins was no exception to this trend.

Starters Luis Severino of the Yankees and Ervin Santana of the Twins each averaged over six innings pitched per start during the regular season, so it felt as though a duel between these two staff aces was inevitable, but that narrative was shattered before the end of the first inning.

Severino threw just 29 pitches and recorded only one out before Yankees manager Joe Girardi yanked him from the game in the top of the first inning, and Santana saw his share of adversity as well, pitching just two innings before ending his start.

At the start of the third inning, both starters had already been pulled from the game, and the Yankees possessed a 4-3 lead thanks to a three-run homer from Didi Gregorius and a no-doubter from Brett Gardner. Each manager had his work cut out for him, as Joe Girardi and Paul Molitor had to entrust their respective bullpens with the colossal task of completing seven more innings.

In the end, Girardi won the battle of the bullpens, and he miraculously avoided using starting pitchers Sonny Gray and CC Sabathia in relief, which means that both pitchers will be available to start in the Yankees upcoming series against the red-hot Indians.

Girardi accomplished this task due largely to the heroic performance of veteran David Robertson, who pitched a career high 3.1 innings of scoreless relief in the Yankees’ win. Robertson demonstrated a collected intensity throughout his appearance, striking out five batters with a breaking ball that was practically unhittable all night and leaving the game to a well-deserved ovation from the Yankee faithful.

After the game, Robertson reflected on his attitude regarding the bullpen’s ostensibly insurmountable task: “I was going to do everything I could to try and put up zeroes and just give us chance to gain ground on them and get the lead.”

When asked about his personal performance, Robertson replied with the same aplomb he exhibited on the mound: “It was fun. I had a good time. I threw a few pitches that I wish I could take back … but I had a great time, and I enjoyed it, mainly because I didn’t give up a ton of runs and lose the game.”

This game was a tremendous win for a Yankees team that at the start of the season were considered remote playoff contenders. Not only did they manage to become only the ninth team in MLB history to win a postseason game after having a starting pitcher record one out or less, they managed to do so without ravaging their bullpen. Their lineup did exactly what it did during the regular season: hit home runs. The Yankees will certainly live and die by the long ball, and so long as they can hone in thieir source of run support, New York is a force to reckoned with.