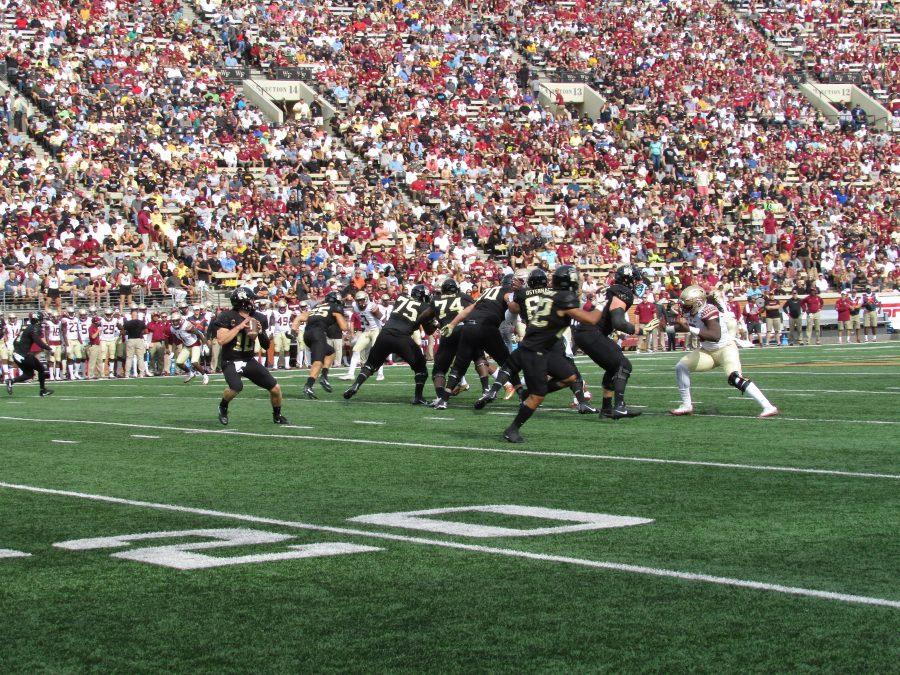 Wake Forest entered their matchup against No. 25 Florida State this past Saturday, Sept. 30 seeking their first 5-0 record since 2006, when they last won the ACC Championship.

Unfortunately, the Seminoles had other plans, and Wake Forest fell, 26-19 at home, dropping their record to 4-1 this the season.

Coming off of a tight 20-19 win against the Mountaineers of App State, which propelled the Deacs to their second straight 4-0 start, Wake Forest fans felt unusually confident going into their contest against the perennial powerhouse that is Florida State. This season, however, had been a struggle for the Seminoles, who traveled to Winston-Salem winless at 0-2 and uneager to drop their third straight game.

Florida State opened up the scoring with a 51-yard field goal with seven minutes left in the first quarter, taking a 3-0 lead over the Deacons.

Wake Forest responded with two field goals of their own, with redshirt senior kicker Mike Weaver scoring late in the first quarter and early in the second quarter, extending his streak of consecutive-made field goals to 12. Wake Forest lengthened their lead with a three-yard run from senior quarterback John Wolford eight minutes into the second quarter, but Weaver’s missed PAT, along with a subsequent Florida State field goal and rushing touchdown gave the Seminoles a narrow 13-12 advantage heading into the half.

A Florida State field goal late in the third quarter pushed the Seminoles’ lead to four, but Wake Forest responded with a touchdown with 13:57 left in the fourth quarter via a seven-yard run from junior runningback Matt Colburn.

With the score knotted at 19-19 with just 6:20 left in the game, a series of three-and-outs for Wake Forest gave Florida State possession with just under a minute left.

The Seminoles, who finished the game with just 121 passing yards, gained 40 of them on their final offensive play, a touchdown pass and PAT that gave Florida State a 26-19 lead they wouldn’t relinquish.

“I think our kids played their hearts out and left everything on the field,” said Wake Forest Head Coach Dave Clawson. “It didn’t come down to one play. That’ll be the narrative that it came that close again. There’s a lot of things that we did that we didn’t give ourselves the best chance to win the game. I think for the first time in years we out-gained Florida State and a lot of the times if you win the statistical battle of yards and lose the game, it’s because of either turnovers or special teams. If you look at today, that’s exactly what happened.”

Clawson added “Three years ago, or even two years ago, this would have been a moral victory. Those in our program no longer exist.”

“I feel like we have so much talent on this team and we can compete with anyone in the country, and I think we showed that tonight.”