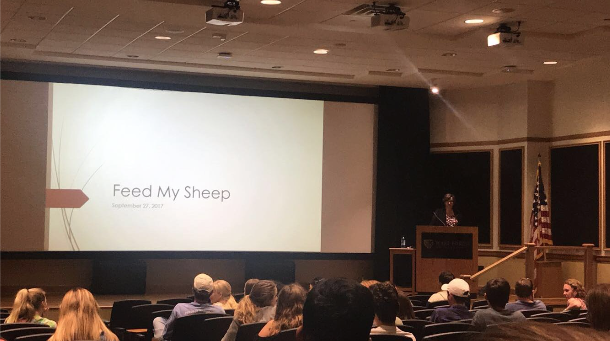 Angela King did not want to teach at Wake Forest. Her first visit to Winston-Salem incited tears — she cried at her table in the Village Tavern restaurant. Yet despite her reservations, she accepted a position.

Twenty-three years have passed since then, and King continues to teach chemistry at Wake Forest, a place she now calls home.

On Wednesday, Sept. 27, King taught students in the Pugh Auditorium lessons of a more personal kind, in her “Last Lecture” talk entitled “Feed My Sheep.”

King’s talk was the first “Last Lecture” series event for this semester, put on by the Wake Forest Student Union. Inspired by Randy Pausch, the Carnegie Mellon professor whose last lecture became a national sensation, the “Last Lecture” series gives professors the opportunity to present ideas and lessons to students as if they were their parting words.

“[The ‘Last Lecture’] allows professors to impart something to students that can’t be normally taught in classrooms,” said senior Megan Anderson, director of Speakers for the Student Union and organizer of the event.

Anderson, a 21-year-old psychology major, decided to reboot the “Last Lecture” series last year and saw students had enjoyed them.

“The ‘Last Lecture’ series is a really cool idea,” said senior David Brock, a former student of King’s, who attended the lecture. “Professors have a lot of really cool advice and stories. It’s cool for them to impart that in this setting and outside their own courses.”

In front of a crowd of students, colleagues, and family, King shared her life lessons from sheep.

King owns and operates Enno Farm, a small family farm in Stokes County with her husband, Bruce, who is also a chemistry professor at Wake Forest, and her two children, Dylan and Hannah.

Enno Farm is home to a flock of Shetland sheep and a flock of Leicester Longwool sheep, as well as some hens, dogs, llamas and a rabbit. As sheep farmers, King and her family breed both flocks and sells their wool — a very strenuous process.

“When you raise sheep, they are always your first thought,” King said. “The care of them is so important, they eat before I do at night.”

The Pennsylvania native demonstrated that importance throughout her lecture, which covered a variety of sheep-related topics, from the ethics of wearing wool and eating lamb, in which she promoted both practices, to FAMCHA, a farming method used to limit the spread of worms among sheep.

A true shepherd, King shared with the crowd her three rules of shepherding, borrowed from James Rebanks, a popular sheep farmer and author of the best-selling book, The Shepherd’s Life.

“It’s not about you, it’s about the sheep and the land,” King said, reading the first of three rules Rebanks had paraphrased from the movie Fight Club. “Sometimes you can’t win, and shut up and go do the work.”

“These rules can be applied to science as well,” said King. “You have to put in the effort and do the work to get the job done, then you can tackle the big issues.”

“I think there’s a lot to learn from [the lecture],” said junior Allegra Brochin. “You can take anything you love and apply it to a bigger issue.”

Others found King’s second life as a farmer to be exciting.

“I would not have expected a professor to have had a sheep farm,” said senior Lila Franco. “[King] was really interesting.”

Toward the end of her “Last Lecture,” King praised Wake Forest students for their talent, and encouraged them to work hard, take advantage of the opportunities they’ve been given, and tackle the emerging global issues, such as climate change and feeding an overpopulated world.

“When I say feed the sheep, it does not mean you just feed them, it is about their whole well-being,” King said. “We should think about society in the same way.”