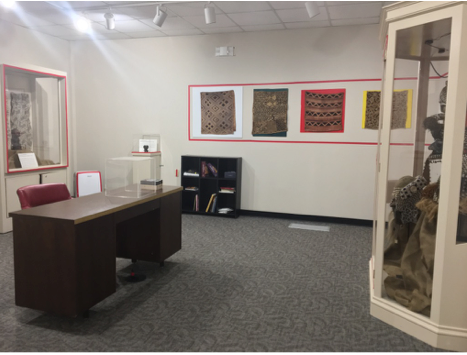 As you enter, you are read a story. A curator is putting together an exhibit about the tribes of Central Africa, but he has disappeared suddenly. Who is to help find him but you?

The first step is to lift the glass case to reveal the music box. It’s a musical puzzle, and you must solve it. When you press the buttons to play the right tune, you find yourself with the code of a briefcase. In the briefcase, there is another clue. And this goes on.

For some, it takes 45 minutes to get through the escape room, while for others it can take over an hour.

In a student-curated exhibit at the Wake Forest Museum of Anthropology inspired by the rising Escape Room trend around the country, children, students, teachers, adults and elders alike weave their way through the exhibit, tracing the walls where pattered African towels hang, cupping the clay pottery in their hands and viewing the intricate and colorful designs of tribal masks. Children sit at the desk in the middle of the room and pretend to be anthropologists, right on the verge of something great.

This is the goal of “Escape the Museum: Central Africa,” the story-based, interactive museum exhibit; that as one hopes to solve a riddle by putting the word “slave” on a board that reveals the hierarchy of many African tribes, the viewer will better connect to the culture than simply reading a panel about it. That as one translates African language to open a cabinet, they will feel immersed in the culture. That as one hears the tune of a traditional song, they will see a glimpse of the spirit world.

“The plot uses all the objects and ties them together to tell this story about spirituality,” said Dr. Andrew Gurstelle, academic director of the Museum of Anthropology. “By doing the puzzle, you learn a little bit more than you would if you just read about the object.”

Brianna Casini, a junior at Wake with majors in Studio Art and Anthropology, knows the tricky exhibit better than anyone, except maybe classmate Lawton Manning. These two created the exhibit this summer after getting the idea from Gurstelle and a grant from the Undergraduate Research and Creative Activities Center.

The URECA program promotes undergraduate research and collaboration between undergraduates and faculty. While many other URECA students were solving dilemmas this summer, Casini said she and Manning were creating them. Beginning with simple puzzles and working their way up, marrying logic and anthropology, they crafted the exhibit.

“[We were] creating an interactive experience for the local community to get together and learn more about African art and artifacts,” Casini said.

Since the opening of the exhibit, the museum has seen school groups, summer camps and adults in the community. With Wake Forest beginning its fall semester, the museum is hoping to get more students to take part in the exhibit.

This fall, they are planning on extending their hours to attract more Wake Forest students, as well as making the escape room available to clubs and groups.

According to Harrell, a second hope of this is to attract visitors to the museum as a whole.

“[The goal of the museum is to] educate and build empathy in people about other people in the world,” Gurstelle said.

“Why should people in North Carolina care, for example, about refugees from Syria?”

At the end of the day, it goes beyond the mind-bending and heart-racing of the escape room. Gurstelle said, “[We want] to show that other people’s life impact us here, and, conversely, we have an impact on other people around the world.”

“We want to make everyone aware of those connections so that we can at least be more intentional with what we do.”