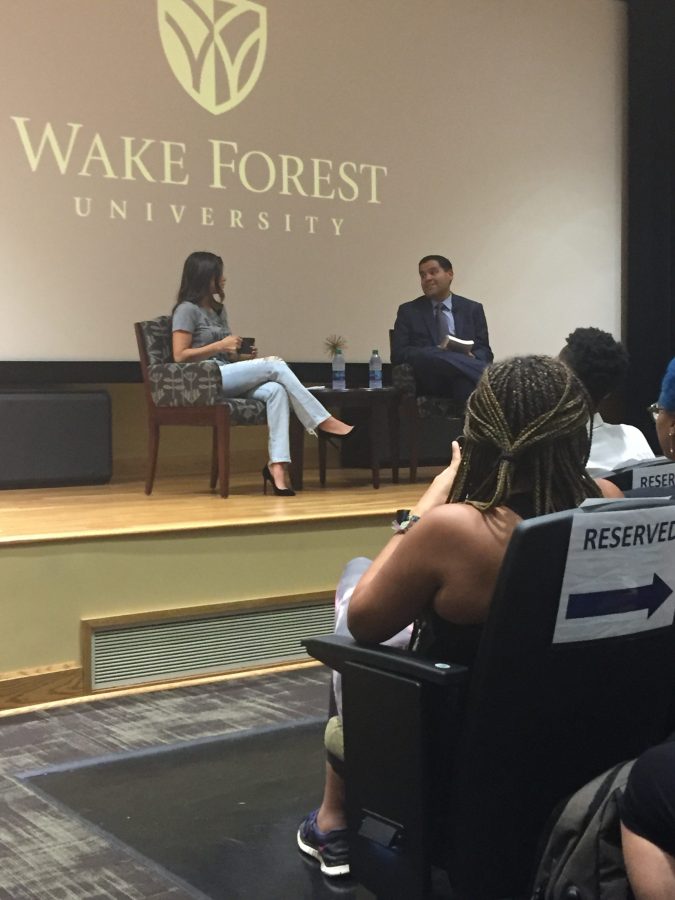 Actress and author Diane Guerrero, known for her roles as Maritza on Netflix’s Orange is the New Black and as Lina on Jane the Virgin, visited campus on Thursday, Sept. 28, to speak for Latinx Heritage Month and the “Journeys to Success” speaker series.

In addition to sharing her personal story of growing up as the child of undocumented immigrants in the U.S. with the audience, she also reflected on the current political climate, intersectional feminism and immigration reform. In her speech and the discussion afterwards, Guerrero emphasized the importance of fighting for social justice for all: “Don’t stop the hustle until we are all comfortable together. Don’t copy the models of people who weren’t raised like you or who didn’t experience the struggles you did … Our current national climate continues to push us to define priorities and the clearest of them all for me, and I think for all of us, is to do the work for those with no voice first.”

Guerrero has used her experiences and her platform to speak up about a wide variety of social issues, particularly immigration reform. As she details in her memoir, “In the Country We Love: A Family Divided,” her parents were deported to Colombia when she was 14 years old. For the rest of her teenage years, she relied on the kindness of family friends so she could stay in the U.S. She has used her fame as an actress to speak out about the injustices she experienced and the injustices that we all observe on a daily basis: “I landed on this platform and all of a sudden people were listening to me, and so I had a decision to make … I wanted to say something important and comment on what was going on around me.”

Guerrero has used her personal experience both to educate people from different backgrounds and to stand in solidarity with those who share aspects of her identity as a Latinx woman of color and the child of immigrants. Sophomore Natalie Valdes appreciated Guerrero’s vulnerability and willingness to share her story:

“As a daughter of an immigrant, it was really exciting to see someone with a somewhat similar background speak on campus,” Valdes said. “We don’t see that a lot here.”

“This term is basically the idea that oppressive institutions in society don’t act independently,” Guerrero said at the event. “They are interrelated and continually shape one another … If we are fighting for people of color … then we need to use an intersectional approach, because there is no hierarchy to oppression. We need to show up for every aspect of our fight.”

Junior Sania Ali said that she appreciated how Guerrero spoke both from personal experience and from the perspective of an advocate for social justice for all.

“I liked how [Guerrero] talked about a variety of topics in her personal life and being Latinx, but also about being an advocate for social justice in general and showing up for all communities,” Ali said.

In addition to discussing immigration reform, she also touched on sexism and racism in the entertainment industry, mental health and the importance of advocating for the rights of all people.

Guerrero ultimately highlighted the importance of resilience, perspective and advocacy. While wearing a shirt that said “Beyonce Wasn’t Built in a Day” she reminded the audience that success, both personal and universal, is possible.

“For me success now doesn’t just mean me,” Guerro said. “It means that we all have to be successful … we show up. That’s one of my mottos.”