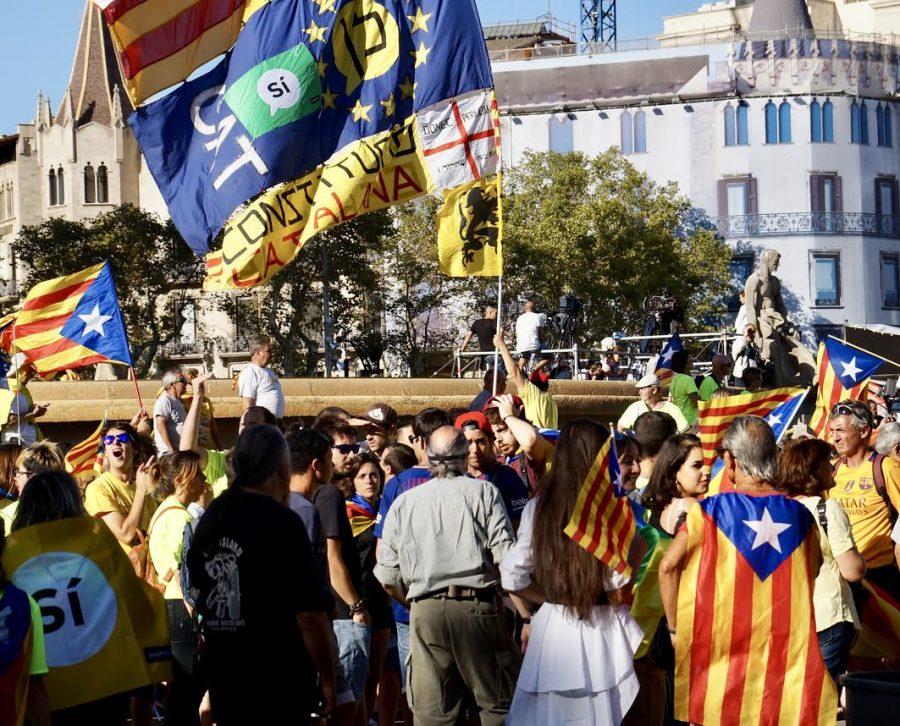 When over 100 Wake Forest students flew to Barcelona, Spain this fall, none of them expected to be submerged in a pivotal historical movement throughout their semester abroad.

On Sunday, Oct. 1, three million Catalans stormed voting stations to cast their votes for independence from the Spanish government. This was the largest demonstration among many in the past seven years towards their fight for freedom. Wake Forest students have witnessed rallies, protests, human towers, sardine-packed metro cars, marches, traditional dances and even extreme brutality around the city-center, leading up to and following this critical event.

Catalonia is a large northeastern region in Spain, consisting of four large provinces with Barcelona as the capital. The Regional Catalan government, located in Barcelona and led by President Carles Puigdemont, has been seeking independence from the National Government of Spain since dictator Francisco Franco called for the suspension of Catalan autonomy in 1939.

Many Catalans have long protested “més democracia” as a result of the feeling of identity and solidarity that exists within the region, with a unique culture and language spoken throughout. Catalan nationalists also feel suppressed by the Spanish government, claiming their negligence to give Catalans back what they contribute to the country economically.

The Spanish government, however, is closed off to this movement and deemed it illegal under the Constitution. On the day of the referendum, Spanish police brutally intervened, injuring over 800 Catalans by firing rubber bullets. They were using batons and pushing voters outside stations.  Students in the WFU Global Business Program were advised to “avoid any manifestation, protest or congregation of agitated people,” and “keep well clear of any polling station” by program director Ryan Lorenz.

Despite the unexpected violent intervention of the Spanish government, 2.2 million people were still able to cast their vote in the referendum, according to the Catalan regional government spokesman. On Sunday night, they revealed that 91 percent of voters answered “Yes” to the question “Do you want Catalonia to be an independent country in the form of a republic?”

Not only have rallies and protests engulfed the streets of Barcelona, the question of Catalan independence has infiltrated the classroom for students abroad. On Tuesday, Oct. 3, universities were closed in Barcelona as a result of the declared labor strike. Prior to this, students watched their professors come to class in protesting attire and listened to their plans to sleep with their children inside the school voting stations the night before the referendum.

Native Catalan Adriana Espinet, professor of productions and operations management in the Wake Forest Global Business program, is one of the many professors who was vocal to her students about her stance on the issue.

“My father, my uncle and my aunt were all arrested and beaten in their adulthood because of their ideas,” Espinet said. “When I saw the faces of my parents and the elderly watching the brutality take place on Sunday, it was as if they had seen a ghost. They never thought they would have to see that again.”

Testimonials from professors like Espinet have dominated the classroom and influenced many students to support such ideals of freedom, democracy and independence, values that we Americans have innately fought centuries for.

Outside Catalonia, however, students and professors in Spain have different opinions. “My teachers have pushed other lessons aside so we would have extensive amount of time to discuss it,” said junior Cecelia Carchedi, who is studying abroad in Madrid for the semester. “Most people understand why they want independence but are against it for the illegality and impracticality of leaving the country and potentially the European Union.”

Lucas Gomez, a Wake Forest junior native to Madrid who is spending the semester in Shanghai, also remains engaged in the issue. “It’s illegal, stupid, selfish and all of the above,” he said. “I think a lot of people are being brainwashed, yet at the same time there are some problems that the government should have faced head-on earlier. It is hard to talk with people that want to leave because they act like victims but feel superior which makes it impossible.”

Regardless of their stance, Wake Forest students are enthused by the opportunity to experience, learn about and form an opinion on such a high-stakes historical moment for the country of Spain. “We came to Spain to study and learn about the history of it,” said junior Catherine Seher, who is studying in Barcelona. “How cool is it that we are now involved in writing it.”