Hit the Bricks supports those affected by cancer 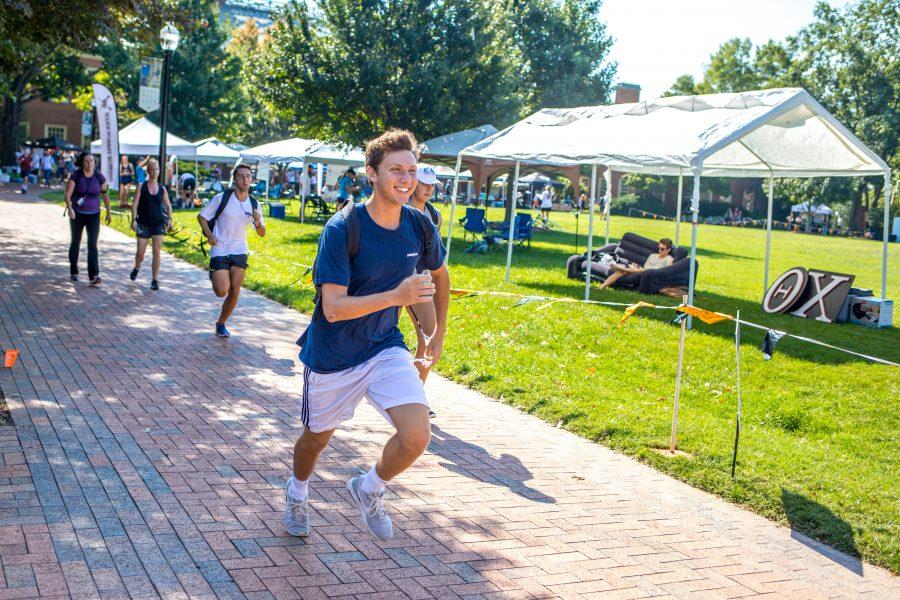 Hearn Plaza is typically a lively spot on campus, but this past Thursday at 7 p.m., there was not a sound to be heard aside from the slow shuffling of several hundred pairs of feet.

It wasn’t like that all day. Just five minutes before, there was music blasting from speakers, Frisbees and footballs being tossed to and fro and plenty of yelling as runners attempted to get their final laps in for Hit the Bricks 2017. But as soon as the clock struck 7 p.m. on Wait Chapel, a hush fell over the crowd as they gathered to walk one more lap, this time specifically in memory of all those who have passed away from cancer.

“We stand together tonight, bound through a common bond of tragedy,” said Mike Ford, son of former United States President Gerald R. Ford and one of the speakers for the post-run vigil.

This idea of “togetherness” in tragedy extended out to the crowd as the Rev. Timothy Auman asked the gathered students to say aloud the names of friends and loved ones who were currently battling or had passed away from cancer. “Jane … Bobby … Arlene Ingwersen … Stephanie Knight …” the names rang out, first slowly and softly, but then with growing frequency and sound.

Some names came out firm and loud, others choked up and barely audible.

This notion that everyone knows someone dealing with cancer is not surprising. Auman referenced a study also found on Cancer.org that one in three women and one in two men are predicted to be diagnosed with some form of cancer. It was numbers like these, he said, that spurred students in 2003 to host the inaugural Hit the Bricks, an event which has grown from raising $4,000 for cancer research in that first year to over $70,000 this year.

“Hit the Bricks is about a lot more than the money,” said junior Miller Ligon. “It helped me bond with a lot of people my freshman year and I think it really helps bring the community together as a whole.”

“I’m always surprised at how many people it brings out each year,” said junior Morgan Childress.

The event has grown in many ways since that inaugural run in 2003. Initially, it was composed of 17 teams of about 300 students total. This year’s event broke 1,200 participants, featuring 112 teams composed of students, faculty, staff and alumni.

“This event is so great because it brings those conversations out and makes people more aware,” said sophomore Lilly Thiemann, a cancer survivor who also spoke to the crowd. “In my high school, we didn’t have much in terms of support. Here, there’s a much greater understanding and caring in the community.”

Candles within white paper bag vigils illuminated the names and dates of those who lost their fight with the disease. Auman took a moment to reflect on those lost, then turned his attention to those who can still be helped.

And for Thiemann, “I try not to think of saving the whole world. I think of one little 8 year old girl who just wants to live, just like I did.”